The company’s goal is to make a cheap, reliable form of public transportation that allows people to travel from Los Angeles to San Francisco in 30 minutes, revolutionizing the concept of the commute. The levitating pods will travel at 750mph through a tube. 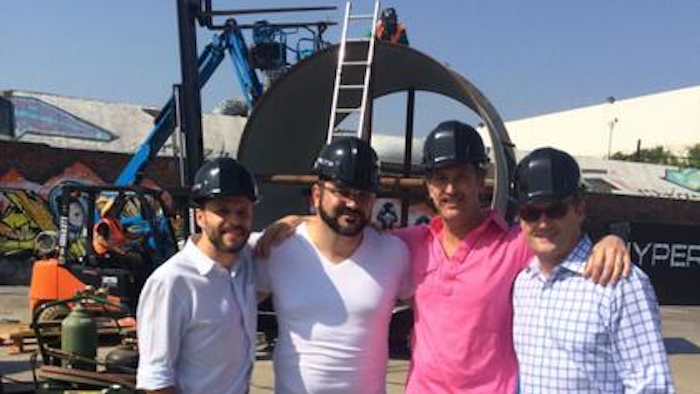 Robert Lloyd has been named CEO of Hyperloop Technologies, and plans to raise $80 million in Series B round funding.

The company’s goal is to make a cheap, reliable form of public transportation that allows people to travel from Los Angeles to San Francisco in 30 minutes, revolutionizing the concept of the commute. The levitating pods will travel at 750mph through a tube.

Lloyd worked for Cisco for 20 years, including as its president, and as an entrepreneur for 10. He joins the company at a time of major growth: Hyperloop Technologies now has a three-acre campus in Los Angeles, with more than 50 full time employees.

He takes over from CEO Brogan BamBrogan, who founded the company in 2014 with Shervin Pishevar. BamBrogan will now serve as the company’s CTO.

Lloyd compared working on the Hyperloop to his time working with the Internet when he was at Cisco: “Hyperloop will become a global network of connected technologies except we will be moving atoms, not bits, and will do so faster, cheaper, safer and greener. Some people and companies will resist the disruption we will create, just as they did when we talked about carrying all forms of data, voice, video and mobile traffic on the Internet. Their doubts will just make us stronger and more determined.”

Former Snapchat COO and Facebook and Google veteran Emily White will also be joining the company as an advisor and board observer.

The engineers at Hyperloop Technologies are pioneering several designs necessary for the revolutionary form of transportation, including compressors that reduce the drag on the high-speed tubes, air bearings or magnetic levitation, electric linear motors for propulsion, and strong, cost-efficient material for the tube itself.

The company’s first customers – and therefore the location of the first commercial tube – haven’t yet come forward, and Lloyd says that he sees Hyperloop as a global company. One of their next steps is to develop connections with other large-scale engineering, construction, and transportation companies.

Hyperloop Technologies hopes to have its first test track up and running in Los Angeles in late 2016 or early 2016, with a commercially viable family of products available by 2020.

“The excitement and innovation that the Hyperloop team is driving daily is infectious,” Lloyd said. “I knew I wanted “in” from the first time I visited and watched as the first full size tubes were delivered.”