He spent billions of dollars on nuclear plants that never generated a watt of power. 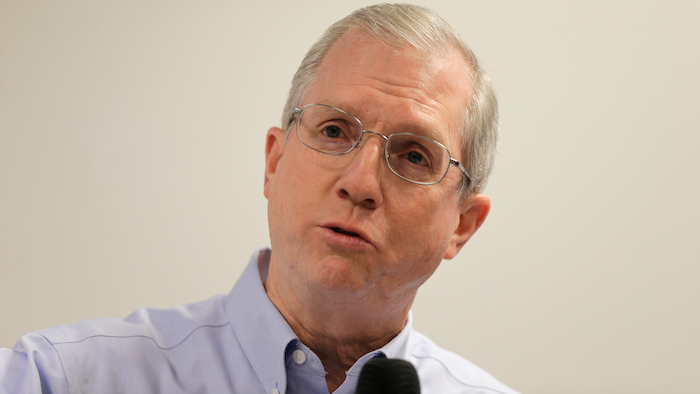 In a Sept. 21, 2016 file photo, Kevin Marsh, CEO of SCANA Corp., speaks to the media at the V.C. Summer Nuclear Station near Jenkinsville, S.C. Marsh and prosecutors have agreed to ask for a two-year prison sentence on federal and state charges he lied about the progress of two nuclear plants that were never finished. A judge will sentence Marsh Thursday, Oct. 7, 2021.
AP Photo/Chuck Burton, File

COLUMBIA, S.C. (AP) — An executive who spent billions of dollars on two South Carolina nuclear plants that never generated a watt of power, lying and deceiving regulators about their progress, is ready to go to prison.

Former SCANA Corp. CEO Kevin Marsh has agreed with prosecutors that he should spend two years in prison. He goes before a federal judge Thursday who will decide whether to accept that deal.

Marsh had been waiting for sentencing until the massive federal investigation was finished, but his lawyers said in court papers this week that his wife of 46 years has incurable breast cancer and he wants to go ahead and serve his time so he might be able to care for her later.

Marsh is the first executive to go to prison for the nuclear debacle. A second former SCANA executive and an official at Westinghouse Electric Co., the lead contractor to build two new reactors at the V.C. Summer plant, have also pleaded guilty. A second Westinghouse executive has been indicted and is awaiting trial.

Marsh in February pleaded guilty to conspiracy to commit wire and mail fraud in federal court, and obtaining property by false pretenses in state court. Prosecutors agreed to his request to serve his entire sentence on both sets of charges in a federal prison.

Marsh lied and presented rosy projections on the progress of the reactors that he knew was false in earning calls, presentations and press releases. The CEO wanted to keep investors pumping money into the project and the company’s stock price up, prosecutors said.

His actions took more than $1 billion from the pockets of ratepayers and investors, authorities said in an 87-page Securities and Exchange Commission lawsuit filed against them in 2020.

The filing documented the history of the doomed nuclear project, which started in 2008. Marsh never wavered from saying the two reactors being built at the V.C. Summer site north of Columbia would be finished by the end of 2020 — a deadline they had to meet if they were going to receive the $1.4 billion in federal tax credits needed to keep the $10 billion project from overwhelming the utility and its minority partner, state-owned Santee Cooper.

“Kevin understands that as Chairman and CEO of SCANA, he bears responsibility for an outcome that no one — least of all Kevin Marsh — wanted to see,” defense attorney Derk Van Raalte wrote in court papers that said Marsh spoke to investigators for at least 33 hours to help them unravel the case.

Marsh's attorneys also submitted 10 letters from friends, colleagues and church pastors detailing good acts from helping the family of an employee killed on the job get financial and legal help to securing an air conditioner for a women's home and taking a week out of his busy executive schedule to volunteer for vacation Bible school.

The letters also detailed his relationship with his wife, Sue, who he married when they were both teens. She has terminal and incurable metastatic breast cancer and may not be able to visit her husband in prison because of COVID-19 fears and her weakened condition, defense lawyers said.

Marsh's lawyers said while the two-year prison sentence alone is just and should be a warning to other executives who think about ignoring their responsibilities to investors and ratepayers, Marsh has suffered in several other ways,

“If a similarly-situated executive is not deterred from engaging in fraudulent conduct by the prospect of being subjected to highly-publicized regulatory proceedings, civil litigation, multiyear state and federal criminal investigations, permanent loss of one’s career and reputation, a substantial financial penalty and 24 months imprisonment, then it is nearly inconceivable that any term of imprisonment would serve as a deterrent,” the lawyers wrote.