Shelve stackers and delivery drivers are getting “pinged” to self-isolate because of contact with coronavirus cases. 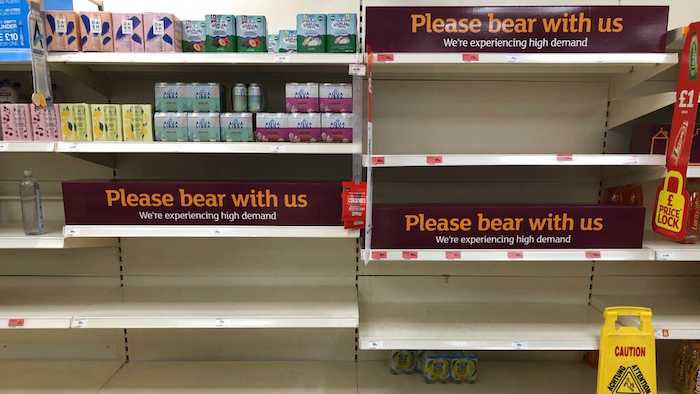 Empty shelves and signs in the soft drinks aisle of a Sainsbury's store in Rowley Regis, England, July 22, 2021.
Matthew Cooper/PA via AP

LONDON (AP) — In scenes reminiscent of the early days of the coronavirus pandemic, supermarket shelves across England were looking a tad empty on Thursday.

This time, it's nothing to do with consumers stockpiling ahead of lockdown. It was all to do with staff, including shelve stackers and delivery drivers, getting “pinged” on their phones to self-isolate because of contact with coronavirus cases.

Grappling with staff shortages amid the so-called “pingdemic,” many businesses, such as supermarket chain Iceland, have had to close some stores — something it didn't have to do at the height of England's three lockdowns during the pandemic. Sandwich chain Pret A Manger also said it has temporarily closed 17 shops due to staff being forced to self-isolate.

Hundreds of thousands of people — including Prime Minister Boris Johnson — are currently having to self-isolate for 10 days after being informed by the National Health Service’s hugely costly test and trace app that they have come into close contact with someone who has tested positive for the coronavirus. Figures from the NHS on Thursday showed a record 618,903 alerts were sent to users of the app in England and Wales in the week ending July 14.

Many critics say the app is being unfairly singled out and that the problems are more to do with the fact that the U.K. is experiencing a sharp increase in infections as a result of the spread of the more contagious delta variant and the lifting of lockdown restrictions.

Though retailers insist there is no need for customers to change their shopping habits as the disruptions were not widespread, calls have grown for the government to radically change the rules.

The British Retail Consortium wants the government to “act fast” and exempt fully-vaccinated workers, or those who test negative for the virus, from the requirements of a “ping.” Changes are expected later Thursday but they won't be substantive.

The app’s notification is advisory and anyone “pinged” by the app is not legally required to isolate, but Johnson's government has insisted that people follow the rules.

But many individuals and firms are starting to take matters in their own hands. There’s growing evidence pointing to people deleting the app. More than 26 million people downloaded the app in England and Wales, around half the adult population, since it launched last September.

Others, particularly in a hospital environment, are opting to turn off Bluetooth when they go into areas where they could potentially come into close proximity with someone who may have COVID-19.

Andrew Selley, the chief executive of Bidfood, a food distribution company, told his delivery drivers to take tests and not to quarantine.

“We know that they’re critical workers as part of the food supply chain, so if people are obviously positive or contacted by Test and Trace then they will have to isolate,” he told BBC Radio.

He said staff pinged by the app should take the gold-standard PCR test. If they tested negative, they should return to work where another daily testing regime is implemented by the company.

The government is transitioning to a different system on Aug. 16, which will mean that double-jabbed individuals will be exempt from the self-isolation rules. That change comes nearly a month after most legal coronavirus rules in England were lifted. The other nations of the U.K. — Scotland, Wales and Northern Ireland — are being more cautious in lifting restrictions.

The BRC’s chief executive Helen Dickinson said that date “feels a long time away” and warned that stores are closing, hours are being reduced and consumers have less choice.

“I think what the most important thing for government to do is to recognize that the current situation is untenable,” she told the BBC.

Paul Hunter, a professor in medicine at the University of East Anglia, agreed that changes were needed as soon as possible and stressed that “not all contacts are equal,” with clear differences between close family members and brief encounters with strangers.

“To my mind it is very clear from the available evidence that the current requirement to quarantine following being pinged because you are a casual contact has little if any value in controlling the epidemic in the U.K., especially if the person being pinged has been fully vaccinated or has recovered from a proven natural COVID infection," he said.

Without rapid changes to the rules governing the app, the pressures on essential services and food processing are set to get more acute. With daily infections rising sharply and set to at least double from current rates to 100,000 this summer, the number of people being pinged by the app will inevitably grow, potentially to more than 1 million a week.

That’s going to cause untold disruption to businesses trying to recover after 16 months of lockdown duress. In addition to the problems in the supermarkets, the “pingdemic” has caused factories to cut production and led to transport chaos, as illustrated by Saturday’s closure of the Metropolitan Line on the London Underground.