A massive fire that burned through a city block in downtown Olympia destroyed a 100-year-old warehouse. 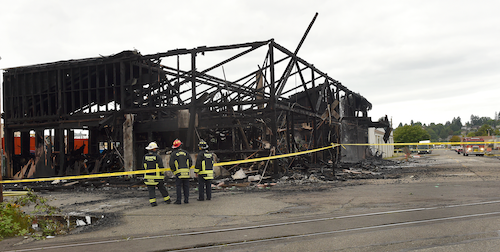 A massive fire that burned through a city block in downtown Olympia destroyed a 100-year-old warehouse in the 200 block of Adams Street in Olympia, Wash., Tuesday, July 5, 2016. Fire crews from Olympia, Lacey and McLane Fire Departments responded with no reported injuries. (Steve Bloom/The Olympian via AP)

OLYMPIA, Wash. (AP) — A massive fire that burned through a city block in downtown Olympia destroyed a 100-year-old warehouse.

KOMO reports that fire officials say it's too early to determine a cause of the blaze early Tuesday morning.

Crews responded to the fire at about 1:15 a.m. after receiving calls about fire and smoke spewing from the building.

They fought the fire for an hour and a half before bringing it under control. Crews also fought to keep the heat from reaching a fuel shop and several propane tanks nearby.

Officials say the destroyed warehouse was built before 1920 as part of a lumber mill and housed a number of different tenants over the years. Most recently, it was a storage warehouse for a local fuel company with the tea wholesaler and wood shop renting space.