Tata Sells 1 Of Its UK Steel Plants Amid Broad Restructuring

The deal will save thousands of jobs at the Scunthorpe plant and the firms that supply it. 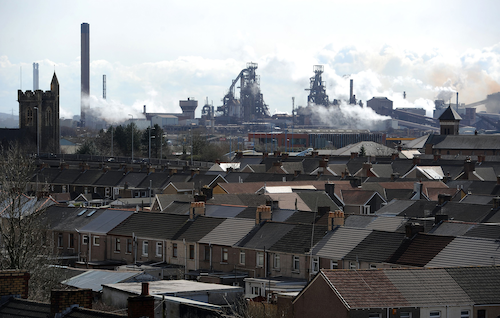 The Tata steel plant dominates the skyline over the roof tops of Port Talbot, Wales, Wednesday March 30, 2016. UK authorities say they will look at all viable options to keep the British steel industry at the heart of its manufacturing base after Tata Steel announced it may sell its UK assets. The sale could put thousands of jobs at risk. (Andrew Matthews/PA via AP)

LONDON (AP) — Tata Steel has sold one of its steel plants in England to a London investment firm, a bit of welcome news for an industry under strain.

The sale of the Scunthorpe works to Greybull Capital announced Monday has been nine months in the making and is separate from the U.K. government's effort to save the Port Talbot plant in south Wales.

The deal will save thousands of jobs at the Scunthorpe plant and the firms that supply it.

Business Secretary Sajid Javid is expected to address the House of Commons on efforts to find a buyer for Tata's other U.K. businesses, including Port Talbot. So far, London-based Liberty House is the only company to express interest in the Welsh plant.

The formal sale process is set to begin Monday.