A man who stormed into a Kansas factory where he worked and shot 15 people, killing three, had just been served with a protective order that probably set off the attack, authorities said Friday. 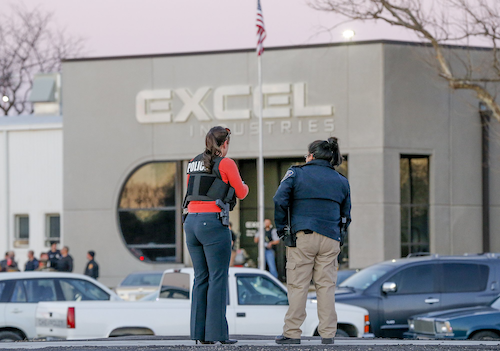 HESSTON, Kan. (AP) — A man who stormed into a Kansas factory where he worked and shot 15 people, killing three, had just been served with a protective order that probably set off the attack, authorities said Friday.

The assault at the Excel Industries lawnmower parts plant in the small town of Hesston ended when the police chief killed the gunman in a shootout.

Harvey County Sheriff T. Walton described the officer as a "tremendous hero" because 200 or 300 people were still in the factory and the "shooter wasn't done by any means."

"Had that Hesston officer not done what he did, this would be a whole lot more tragic," Walton said.

The gunman was identified as Cedric Ford, a 38-year-old plant worker who was armed with an assault rifle and a pistol.

Kansas Gov. Sam Brownback said preliminary information indicated that the officer was Hesston Police Chief Doug Schroeder, who did not wait for backup and "seized the situation."

Schroeder has been on the job since 1998, according to his LinkedIn profile.

While driving to the factory, the gunman shot a man on the street, striking him in the shoulder. A short time later, he shot someone else in the leg at an intersection, authorities said.

The suspect shot one person in the factory parking lot before opening fire inside the building, the sheriff's department said in a news release.

Ford had several convictions in Florida over the last decade. His past offenses included burglary, grand theft, fleeing from an officer, aggravated fleeing and carrying a concealed weapon, all from Broward and Miami-Dade counties.

According to the Wichita Eagle, Ford also had criminal cases in Harvey County, including a misdemeanor conviction in 2008 for fighting or brawling and various traffic violations from 2014 and 2015. 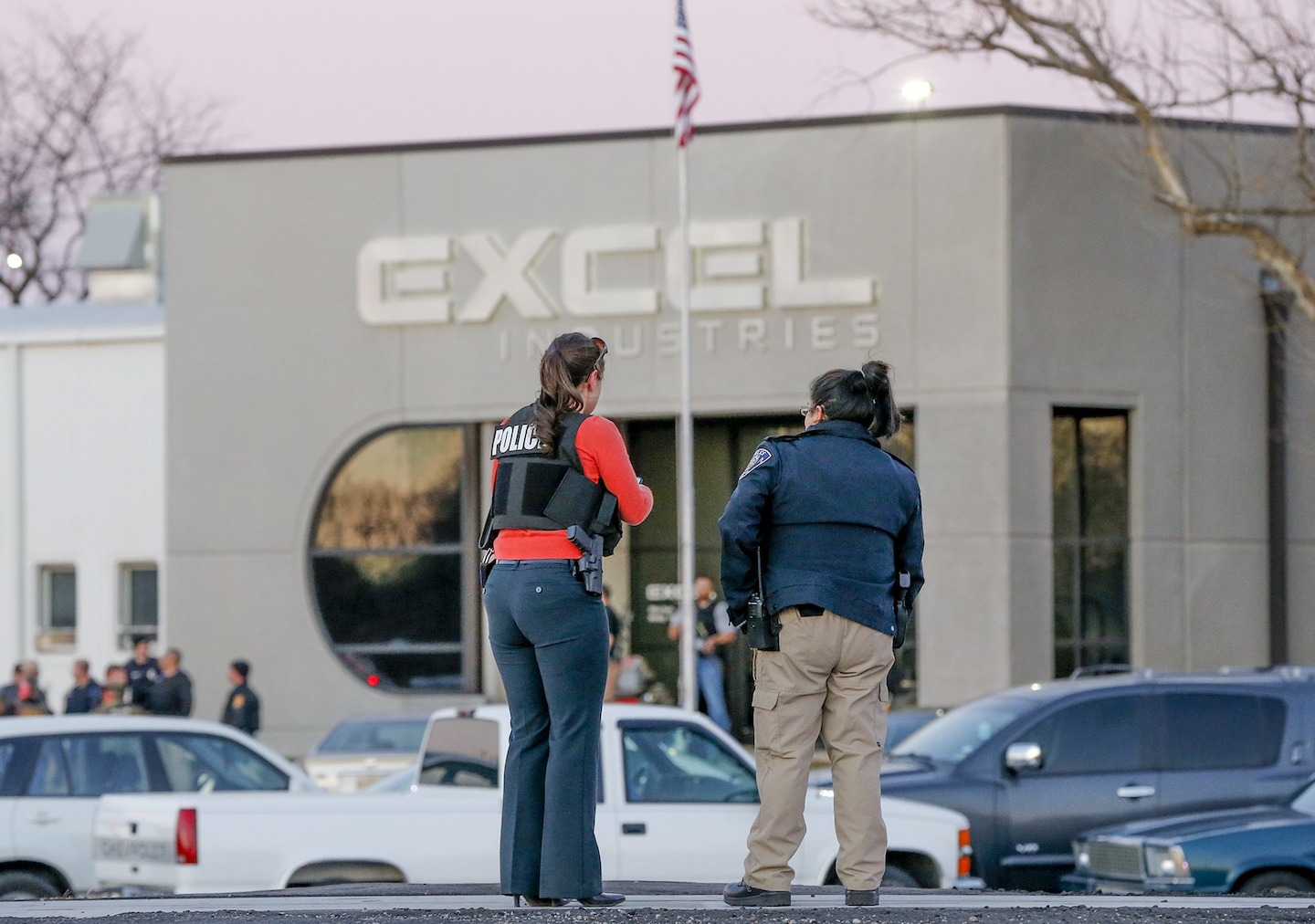 A Facebook page under the name of a Cedric Ford employed at Excel Industries includes photos posted within the past month of a man posing with a long gun and another of a handgun in a man's lap in a car. Federal law bars felons from possessing firearms.

Recent posts also include music videos of rappers from Miami, photos of cars and pictures posted in January of a trip to a zoo with children.

The shooting came less than a week after a man opened fire at several locations in the Kalamazoo, Michigan, area, leaving six people dead and two severely wounded. Authorities have not disclosed a possible motive in those attacks.

At least 16 people were taken to hospitals, and one person was listed in critical condition.

Walton said his office served the suspect with the protection-from-abuse order at around 3:30 p.m., about 90 minutes before the first shooting happened. He said such orders are usually filed because there's some type of violence in a relationship. He did not disclose the nature of the relationship in question.

Ford had left work early without explanation before returning hours later with a rifle, according to a co-worker.

Matt Jarrell said he and Ford worked "hand-in-hand" as painters on the second shift. He said Ford arrived as scheduled on Thursday but later disappeared and was not there to relieve him so that he could take a break.

Jarrell said someone else eventually spelled him and that he was sitting in his truck in the parking lot when he saw Ford drive up in a truck that wasn't his. He sped away when he saw Ford shoot someone and then enter the building.

Moments later, Martin Espinoza, who works at Excel, heard people yelling to others to get out of the building, then heard popping and saw the shooter, a co-worker he described as typically pretty calm.

Espinoza said the shooter pointed a gun at him and pulled the trigger, but the gun was empty. At that point, the gunman got a different gun and Espinoza ran.

"He came outside after a few people, shot outside a few times, shot at the officers coming onto the scene at the moment and then reloaded in front of the company," Espinoza told The Associated Press. "After he reloaded, he went inside the lobby in front of the building, and that is the last I seen him."

Dennis Britton Jr. suffered a fracture in his right leg when a bullet went through his buttocks and out his leg.

Britton's father, Dennis Britton Sr., who also works at the plant as a welding team leader, said his son was "awake and talking and communicating."

The son told his father that people initially mistook the gunshots for the sound of a gas fire. After hearing shouts, the younger Britton stepped out of a welding bay, heard a pop and "immediately went to the ground," his father said.

The officer who exchanged fire with the shooter was not injured.

Erin McDaniel, a spokeswoman for Newton, said the suspect was known to local authorities. She would not elaborate.

Hesston is a community of about 3,700 about 35 miles north of Wichita.

Excel Industries was founded there in 1960. The company manufactures Hustler and Big Dog mowing equipment. 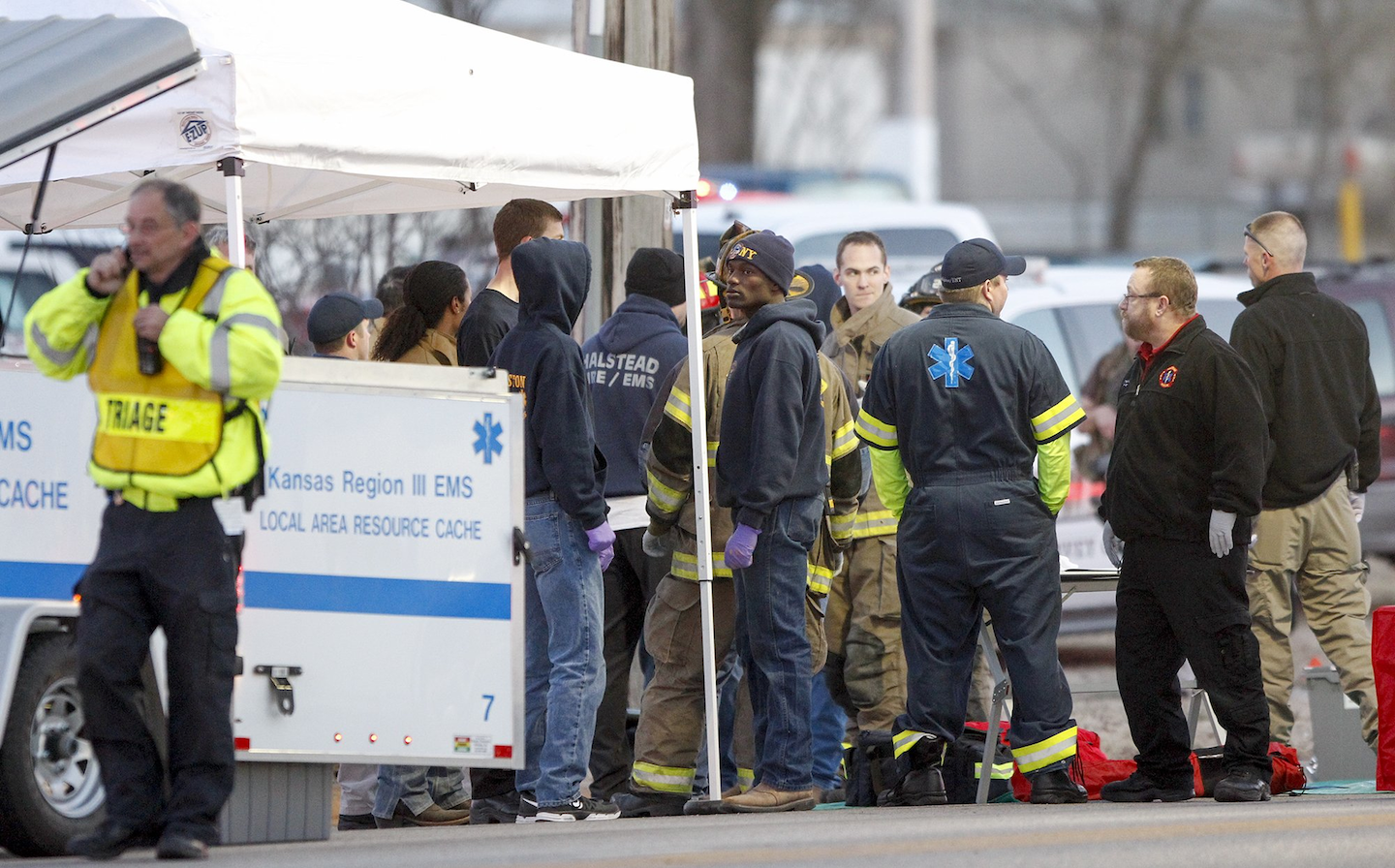 Here is a timeline of events in the case, according to the authorities and witnesses:

— Around 3:30 p.m.: Someone from the Harvey County sheriff's office goes to the plant and serves Ford with a protection from abuse order.

— Around 5 p.m.: Ford is driving in a residential area near a high school in the nearby community of Newton and shoots a man, wounding him. The man was driving with his two children and was shot in the shoulder. Another vehicle was hit with a bullet, but no one was struck.

— Minutes later: Ford drove into oncoming traffic, causing his vehicle and another one to go into a ditch. Ford then shot the motorist and took the person's vehicle.

— Minutes after that: Ford pulls into the Excel plant's parking lot and exits the vehicle carrying a rifle. He raises it and shoots someone, wounding the person, according to co-worker Matt Jarrell, who was watching from his truck. Ford then enters the building near the back, where his painting department is located, and begins shooting people.

— At 5:23 p.m.: A Hesston police officer who responded to the scene shoots and kills Ford during an exchange of gunfire.