The danger of rogue waves for ships and offshore platforms is no joke. 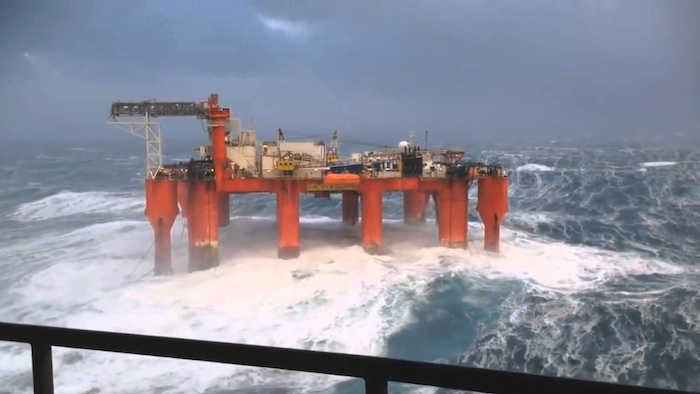 The danger of rogue waves for ships and offshore platforms is no joke. In December 2015, a nearly 50-foot wave smashed into a North Sea oil rig, killing one worker and injuring another.

Now engineers from MIT have developed a new prediction tool that could give ships and offshore platform workers a 2-3 minute warning of an oncoming rogue wave — hopefully enough time to get workers to safety.

The tool is an algorithm that analyzes data from surrounding waves and seeks out clusters with the right height and length to could produce a rogue wave. Focusing on groups of waves is vital because although waves generally move independently of one another, rogue waves are usually made when waves rolling through the ocean in a group exchange energy. This also helps show that although rogue waves are rare, they are not random.

“These waves really talk to each other,” said Themis Sapsis, the American Bureau of Shipping Career Development Assistant Professor of Mechanical Engineering at MIT “They interact and exchange energy. It’s not just bad luck. It’s the dynamics that create this phenomenon.”

The new technology is superior to the current method of predicting rogue waves, which requires multiple computers that simulate every wave and produce a high-resolution snapshot of what’s happening across a body of water.

Though the researchers say this development could become a crucial tool for helping offshore rigs shut down in time to avoid dangerous waves, they say there is still work to be done to make sure it can operate effectively out on the high seas.

“The approach is original — it is fast, easy to implement, and it does not require computational power,” said Miguel Onorato, professor of physics at the University of Turin, who was not involved in the research. “Tests in wave basins and field measurements data are needed in order to establish reliability of the tool in realistic conditions.”