Eight people were killed and nine others injured in an explosion that occurred when a local government agency in charge of work safety in southwestern China was disposing of leftover materials used to make fireworks, state media said Friday. 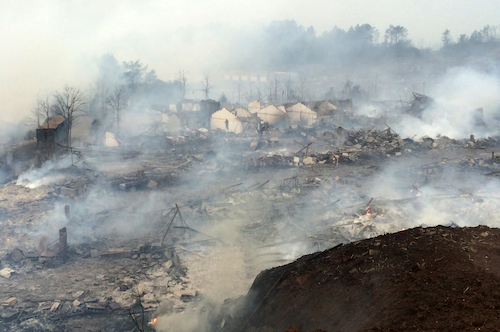 Smoke rises over the rubble of a fireworks factory after an explosion near Shangrao in southern China's Jiangxi province Wednesday Jan. 20, 2016. A massive explosion Wednesday at a fireworks plant in southern China killed several people and injured dozens more while shattering windows of homes in the area, officials and state media reports said. (Chinatopix via AP) CHINA OUT

BEIJING (AP) — Eight people were killed and nine others injured in an explosion that occurred when a local government agency in charge of work safety in southwestern China was disposing of leftover materials used to make fireworks, state media said Friday.

The work safety bureau for Gui'an district in Guizhou province was destroying the materials from a defunct fireworks factory in a mountain ravine when the blast occurred, the official Xinhua News Agency said.

The brief report did not say how the explosion took place, or explain how it could have happened to a government agency responsible for work safety.

Production of fireworks is winding down as China prepares to ring in the Year of Monkey on Monday. One of the celebratory traditions is to set off fireworks, although demand is declining in urban areas as people grow more concerned about air pollution.

Last month, an explosion at a fireworks factory in the central Chinese province of Henan killed 10 people and injured seven others.