JOHANNESBURG (AP) — Greenhouse gases that are more powerful than carbon dioxide are the focus of a global gathering this week in Africa. Experts say cutting hydrofluorocarbons, or HFCs, is the fastest way to reduce global warming. The United States is among the countries that want the world to... 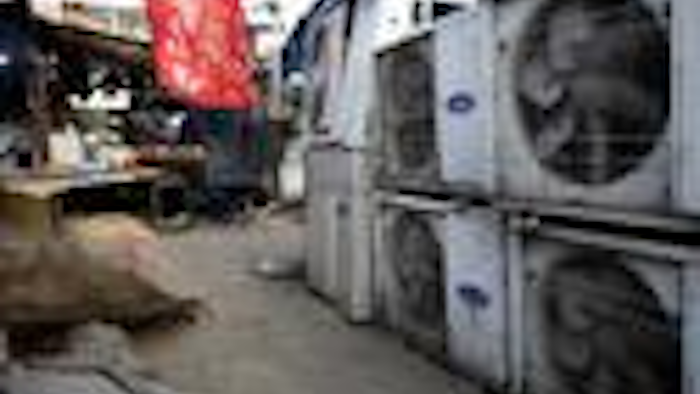 JOHANNESBURG (AP) — Greenhouse gases that are more powerful than carbon dioxide are the focus of a global gathering this week in Africa. Experts say cutting hydrofluorocarbons, or HFCs, is the fastest way to reduce global warming. The United States is among the countries that want the world to quickly phase out the use of HFCs, and Secretary of State John Kerry is arriving Thursday to encourage a deal. Here's a look at a potential global climate agreement that has been described by the National Resources Defense Council as "the world's biggest climate protection achievement in the year after Paris."

IT'S NOT ABOUT THE OZONE LAYER

The ozone layer has been healing for a while, thanks to the global agreement known as the Montreal Protocol. In 1987, countries alarmed by the discovery of a huge hole in the ozone layer over Antarctica signed the treaty to eventually end the use of chlorofluorocarbons, which at the time were used in refrigerators and aerosols like hair spray. HFCs were introduced to replace CFCs, and scientists realized only later that they have a strong effect on global warming. Although HFCs don't harm the ozone layer, their ability to trap the heat radiating off the Earth is hundreds or thousands of times more potent than that of carbon dioxide. The U.N. Environment Program says that reducing HFCs under the treaty could reduce global warming by .5-degree Celsius by the end of this century and environmental groups say the step is essential to meeting the goals of the Paris Agreement on climate change.

WHERE THE U.S. AND CHINA AGREE

The United States and China have their difficult issues, but the world's two worst polluters have pushed to fight climate change. The two heavyweights agreed in 2013 to pursue a deal to phase out HFCs, which are used in air conditioners, refrigerators and insulating foams. The U.S. and China are urging the countries gathered this week in Kigali, Rwanda, to extend the Montreal Protocol to include HFCs. They also want agreement on an "early freeze date" for when countries must cap their use of them. The U.S. and India, the world's third worst polluter, also have agreed to try to use the treaty to phase out the chemical.

A THREAT AS URGENT AS EXTREMISTS?

HFCs have been called the world's fastest-growing climate pollutants, though they are less plentiful than carbon dioxide. The growth comes as more people in developing countries make enough money to buy appliances. Last month, Kerry said HFCs currently emit as much pollution as 300 coal-fired power plants. At an international climate meeting in July for state parties to the Montreal Protocol, Kerry stressed the urgency of fighting climate change, saying it is as dangerous as the threat posed by the Islamic State and other extremist groups, if not more so.

AFRICAN, ISLAND STATES IN A HURRY

Small island states and other countries, including many in Africa, that say they face the biggest threat from climate change are urging action on HFCs, and soon. At the July meeting by states parties to the treaty, many countries favored capping the growth of HFCs in 2021. China was said to prefer later in the decade, with India aiming at the end of it or beyond. Whatever the timing, less-developed countries are seeking help from richer ones to help them implement the treaty.