The easy, electric chemistry of the four leads in Paul Feig's "Ghostbusters" acts like a firewall against the supernatural and the adolescent, alike, in this spirited reboot of the 1984 original. Ghouls and anonymous Internet commentators — who have flocked to their thumbs-down buttons ahead of... 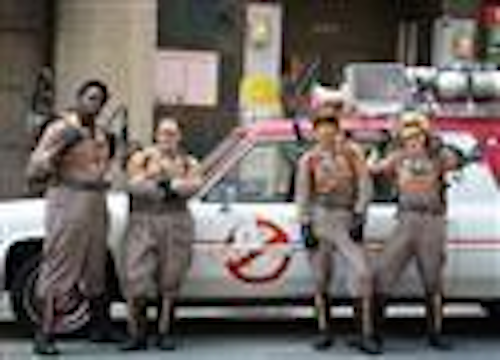 The easy, electric chemistry of the four leads in Paul Feig's "Ghostbusters" acts like a firewall against the supernatural and the adolescent, alike, in this spirited reboot of the 1984 original.

Ghouls and anonymous Internet commentators — who have flocked to their thumbs-down buttons ahead of the film's release — share plenty of characteristics. Each is likely to drool and quick to disappear when you turn on the lights. Feig's "Ghostbusters" ain't afraid of either.

Why should he be, anyway? In his corner he has the best comic actor of the decade, Melissa McCarthy, the klutzy wit of Kristen Wiig, "Saturday Night Live" standout Kate McKinnon and the big-screen breakthrough of Leslie Jones, the film's secret weapon.

His "Ghostbusters" makes some winks to the uproar that preceded his gender-swapping film, but it mostly steers straight ahead, too busy being funny to worry much about misogynist detractors. It does, however, pay a lot — too much — attention to placating "Ghostbusters" fans with the familiar showdowns and iconography of the original two films.

I was proudly raised on Bill Murray comedies, but the preciousness many have over a "Ghostbusters" remake is nevertheless mystifying. This isn't "Stripes" we're talking about here. It's not even "Meatballs." Ivan Reitman's "Ghostbusters" — equal parts spectacle and deadpan, inspired by "Abbott and Costello Meet Frankenstein" — was good, all right, but it wasn't some sanctified ground never to be trod on again. It already spawned a mediocre sequel, after all.

Here, the iconic ambulance has been traded for a borrowed hearse and cameos from original stars (excepting Harold Ramis, who died in 2014) have been awkwardly forced in. The team, once assembled, is astonished at the sky-high rent required for the original's firehouse and instead relocates to a Chinatown office above a takeout joint. (The film's New York overall is refreshingly authentic.)

After an early ghost sighting (featuring an excellent Zach Woods) and the familiar synths of Ray Parker Jr.'s theme, screenwriters Feig and Katie Dippold bring the foursome together.

Wiig is a physics professor trying to make tenure at Columbia but she's disgraced by her latent belief in the paranormal. Her old friend, Abby (McCarthy, reliably solid if somewhat restrained), has stayed on the case, though, with her eccentric gizmo-making sidekick, Jillian (McKinnon). The bug-eyed, fizzy-haired McKinnon is like a blow torch of steampunk fire to the movie.

Jones, who plays a subway worker, might have been expected to be the broadest performer of the bunch given the knockout punch of her "SNL" appearances, but her character is impressively grounded. She's the best of the quartet, though Feig doesn't give her enough to do later in the film.

Murray, Ramis, et al excelled at finding laughs when nothing was happening, without seeming to be trying at all. Feig's film never has that anything-can-happen feeling, and it suffers for it. I wish he had let his talented cast truly loose.

Big-budget special effects are the enemy of comedy: they suck the air out. In a sense, this "Ghostbusters," which swells to a bloated CGI finale in Times Square, has overpowered one Hollywood specter — sexism — only to be stifled by another: the all-powerful force of franchise-making.

Still, the freewheeling and funny solidarity of the four leads win out in the end, even if Feig shows more timidity than he did in "Bridesmaids," ''The Heat" or "Spy." Chris Hemsworth, playing a ditzy secretary, is one of the most clever stereotype reversals: He's the office eye candy.

It feels a little like this "Ghostbusters" was a cultural test that we (not the movie) have already failed. Feig's film may be a feminist milestone: a big ol' popcorn movie taken over by women, (something that should have happened long ago and engendered far less vitriol). But it's also simply a breezy good time, one that just happens to culminate with four very funny ladies shooting a monster in the balls.

"Ghostbusters," a Columbia Pictures release, is rated PG-13 by the Motion Picture Association of America for "supernatural action and some crude humor." Running time: 116 minutes. Three stars out of four.