NASA calls off next Mars mission; no time to fix leaky seal

ORLANDO, Fla. (AP) — NASA is calling off its next mission to Mars because there isn't enough time to fix a leaky seal on a key science instrument. The InSight spacecraft was set for launch in March. The problem is with a protective pouch around the lander's seismometer, which was designed to... 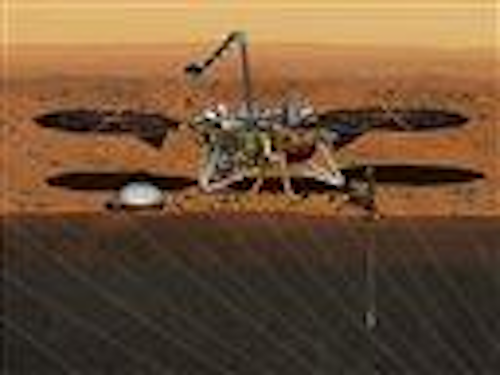 ORLANDO, Fla. (AP) — NASA is calling off its next mission to Mars because there isn't enough time to fix a leaky seal on a key science instrument.

The InSight spacecraft was set for launch in March. The problem is with a protective pouch around the lander's seismometer, which was designed to measure ground movement on the red planet.

NASA managers and French designers of the instrument said Tuesday they must now decide whether the pouch's vacuum seal needs to be repaired, redesigned or the mission scrapped.

The next opportunity to launch the InSight lander is in May 2018 since the best chances of launching missions between Earth and Mars occur for just a few weeks every 26 months.

"We're close enough to launch but unfortunately we don't have enough time to try to identify the leak, fix it and recover and still make it to the launch pad in March," said John Grunsfeld, NASA's science mission chief.

The goal of the mission was to explore the interior core, mantle and crust of Mars in a way that no other planet has been studied outside of Earth. So far, $525 million has spent on the $675 million mission.

"We know the interior of Earth and its structure very well, but of the other planets, Mars is our only hope to make those kinds of measurements," said Jim Green, director of NASA's Planetary Science Division.

NASA managers said it could take several months of analysis and discussion before they decide how to proceed. A redesign of the part could make the 2018 opportunity unlikely since it could take up to five years.

NASA officials said the delay of the InSight mission wouldn't affect the schedule of any other missions to Mars.

The three sensors on the seismometer need a vacuum seal around them to withstand the harsh, frigid Martian environment. Leaks had showed up during previous tests and mission team members thought the problem had been fixed. But the latest tests this week showed another leak of unknown origin.

The spacecraft was delivered to Vandenberg Air Force Base in California last week in anticipation of a launch. It will be sent back to Lockheed Martin's plant in Denver. It would have landed on Mars six months after launch.