The floor at this year's Los Angeles Auto Show will look a lot like America's roads: full of SUVs. 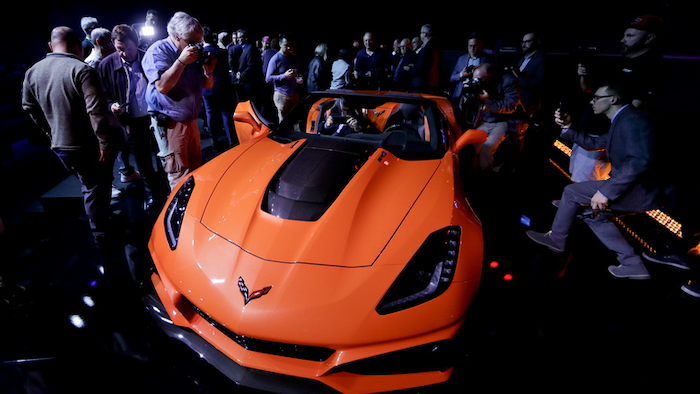 People gather around the 2019 Chevrolet Corvette ZR1 convertible after it was revealed during the AutoMobility LA auto show Tuesday, Nov. 28, 2017, in Los Angeles. (AP Photo/Chris Carlson)

The floor at this year's Los Angeles Auto Show will look a lot like America's roads: full of SUVs.

Hyundai and Nissan will debut new small SUVs at the show, while Subaru will take the wraps off its new three-row SUV, the Ascent. Jeep will show a new version of its rough-and-tumble Wrangler, while Infiniti, Lexus, Lincoln and Porsche will debut more refined models.

A combination of low gas prices, growing millennial families and a host of new models is fueling the SUV boom. As of October, overall U.S. vehicle sales were down 2 percent compared to the same period last year, but SUV sales were up 6 percent, according to Autodata Corp.

The L.A. show will also have plenty of eco-friendly models in a nod to California buyers, who purchase a higher percentage of hybrids and electrics than the U.S. as a whole thanks to state tax credits and other incentives. Land Rover will debut its first-ever plug-in gas-electric hybrid, while Volkswagen will show its upcoming family of electric vehicles. Porsche will also have a plug-in hybrid.

Here are some of the vehicles being unveiled at the show, which opens to the public on Friday:

Mercedes debuts the third generation of its CLS four-door coupe. The fastback roof and minimalist styling remain, but there are two major changes: For the first time, the CLS will seat five and it's also a mild hybrid. An electric motor works in tandem with the new six-cylinder engine, boosting acceleration. Mercedes says the engine puts out 362 horsepower and 369 pound-feet of torque alone and gains an additional 21 horsepower and 184 pound-feet of torque with the motor. Inside, there's a system that adjusts the seats, massagers, music, lighting, climate control and even adds a touch of fragrance based on six moods a driver can choose, including "Joy" and "Comfort." The CLS goes on sale next fall. Pricing wasn't released, but the current CLS starts at $75,150.

Jaguar Land Rover has promised to offer an electric or hybrid powertrain option in each of its vehicles starting in 2020. Among the first will be the 2019 Range Rover and Range Rover Sport. Plug-in hybrid versions of both vehicles are making their debut at the L.A. Auto Show. The Range Rover P400e and Range Rover Sport P400e have a 296-horsepower, 2.0-liter four-cylinder engine combined with a 114-horsepower electric motor. They can drive up to 31 miles in pure electric mode at speeds of up to 85 miles per hour. Drivers can plug a destination into the navigation system and the Rover will calculate the optimal mix of motor and engine power to maximize fuel economy. 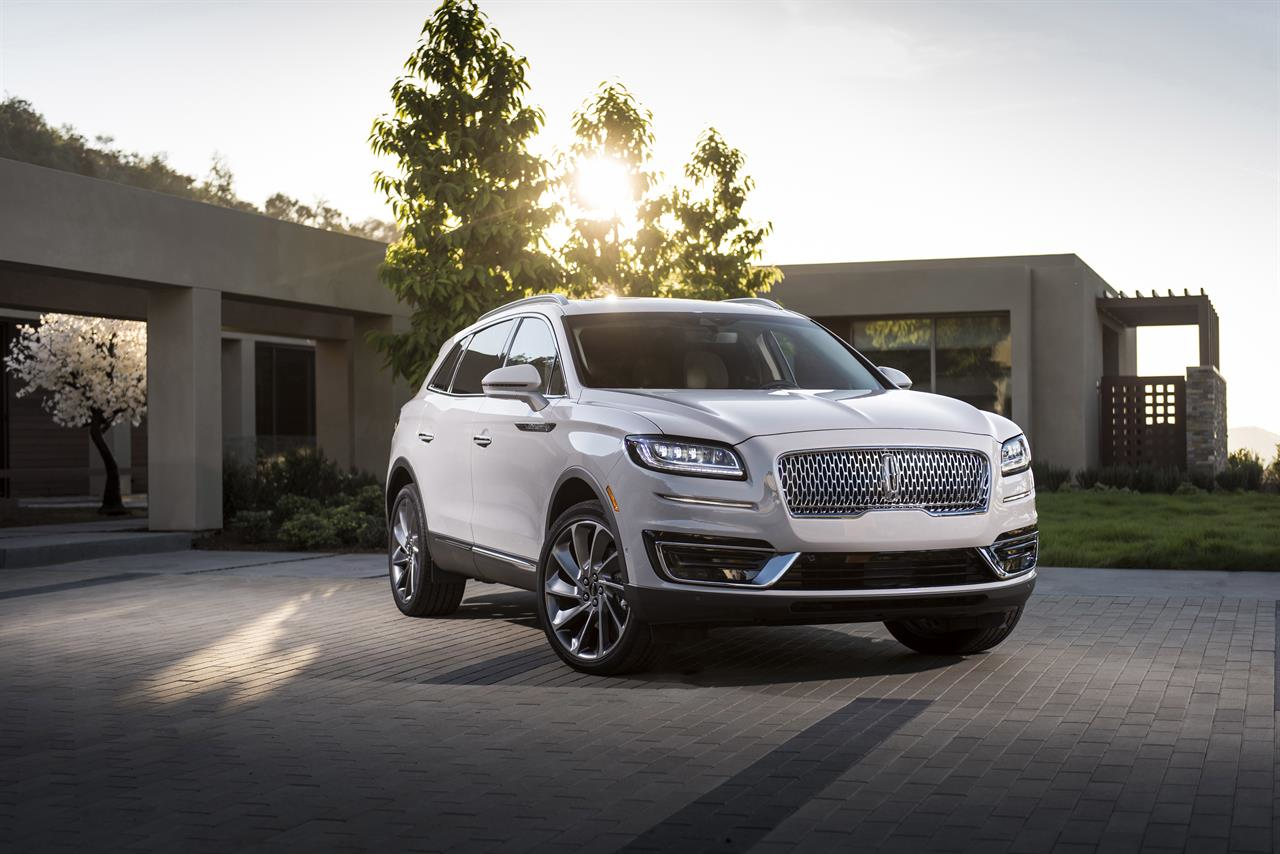 The biggest news with Audi's revamped A8 large luxury sedan is that it can nearly drive itself at slower speeds on some divided highways. The German brand's flagship car, when equipped with a traffic jam pilot, has 24 radar, camera and laser sensors connected to a computer that can take charge of steering, acceleration and braking at up to 37 miles per hour on freeways with barriers dividing the directional traffic. That means the driver doesn't have to touch the steering wheel in traffic jams until manual control is required again. The A8 gets a new 340-horsepower, 3.0-liter turbocharged V6 engine with a gas-electric hybrid system that helps it accelerate for better fuel economy and also powers all of its advanced features. The 2019 A8 has an eight-speed automatic transmission. Price wasn't released, and it won't be available until late next year.

Lincoln's midsize MKX SUV gets a new name, Nautilus, in an effort to separate itself from the alphanumeric luxury crowd. It also gets its first refresh since it went on sale in 2015. The 2019 Nautilus swaps its V6 engine for two turbocharged four-cylinder choices: a 2.0-liter that puts out 245 horsepower or a 2.7-liter with 335 horsepower. 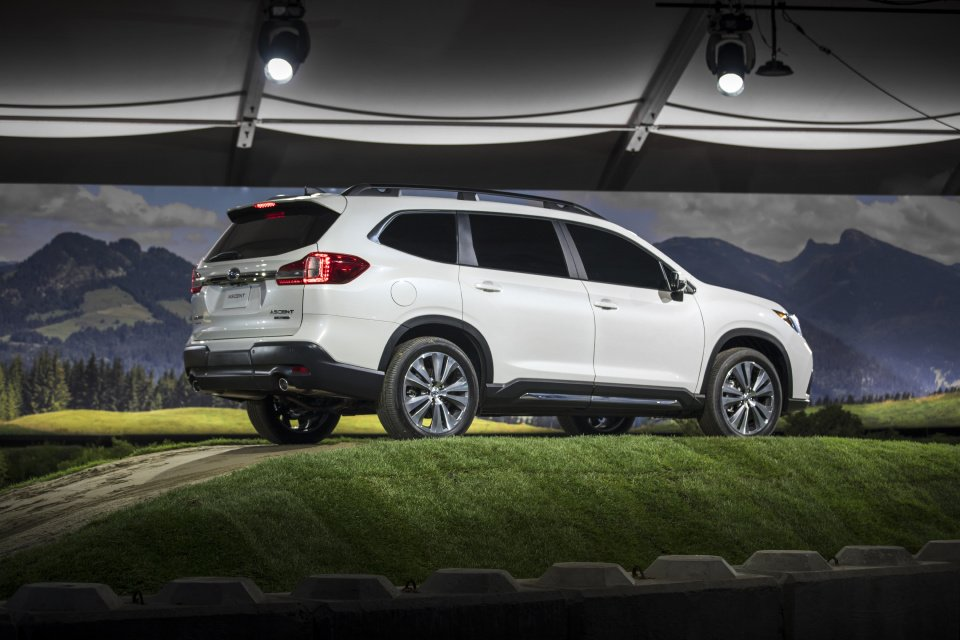 This photo provided by Subaru shows the Subaru Ascent. Known for its small all-wheel-drive cars and SUVs, Subaru enters the big people-hauler market with the new Ascent. It’s got three rows of seats and can carry as many as eight people. (Michael A. Shaffer/CapitolSunset.com/Subaru of America, Inc. via AP)

The Nautilus adopts Lincoln's signature mesh grille. It also has a suite of new safety technologies, including a system that keeps the SUV centered in its lane and an evasive maneuvering system that can automatically steer the vehicle around obstacles. The 2019 Nautilus goes on sale in the spring.

The fastest, most powerful version of General Motors Co.'s Chevrolet Corvette gets its first drop-top in nearly a half-century. Chevrolet says the convertible won't hurt the 755-horsepower car's performance much. It's only 60 pounds heavier than the standard coupe and still will have a top speed of over 200 miles per hour. The only changes for the convertible are the structure for the car's folding top and repositioned seat belt mounts. The 2019 ZR1 made its debut earlier this month in Dubai. The ZR1 last had a convertible in its original model year in 1970. The coupe starts at $119,995 including shipping, while the convertible starts at $123,995. They'll hit showrooms this spring.

Infiniti's midsize, five-seat SUV gets a complete overhaul, starting with a rigid but lightweight new underbody made from high-strength steel. The 2019 QX50 sits up higher than the outgoing model and has a beefier, more confident look. Under the hood is what Infiniti says is the world's first production-ready variable compression ratio engine. 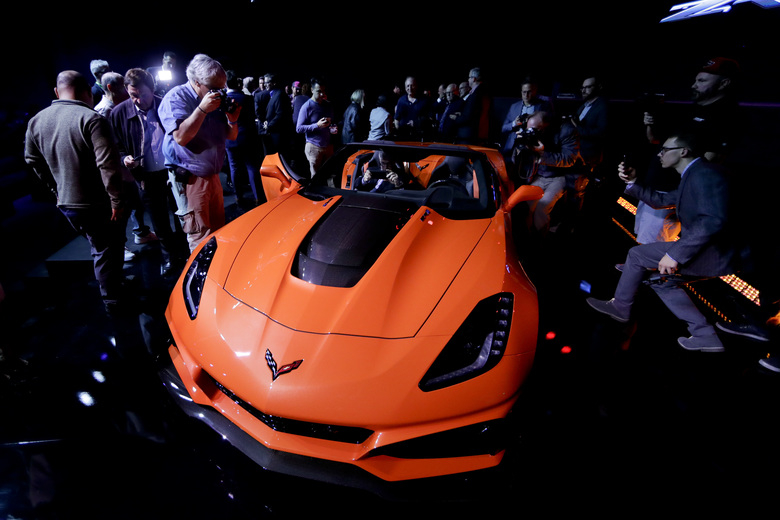 People gather around the 2019 Chevrolet Corvette ZR1 convertible after it was revealed during the AutoMobility LA auto show Tuesday, Nov. 28, 2017, in Los Angeles. (AP Photo/Chris Carlson)

The 2.0-liter turbocharged four-cylinder automatically adjusts the pistons' performance to optimize power or fuel efficiency. Infiniti says the engine delivers 268 horsepower and 27 miles per gallon in combined city and highway driving, a 35 percent improvement in fuel efficiency over the outgoing QX50. The new QX50 also boasts Infiniti's ProPilot driver assistance system that can automatically control braking and speed and keep the SUV within its lane. The QX50 goes on sale in the first quarter of 2018.

Known for its small all-wheel-drive cars and SUVs, Subaru enters the big people-hauler market with the new Ascent. It's got three rows of seats and can carry as many as eight people. Built in Lafayette, Indiana, the Ascent will be sold only in North America to satisfy its thirst for bigger vehicles. The all-wheel-drive Ascent is powered by a new 2.4-liter turbocharged four-cylinder engine. Second-row captain's chairs are optional on some versions. The price wasn't released, but the Ascent will go on sale next summer.