WASHINGTON (AP) — The Latest on the 2016 presidential campaign (All times EDT): 11:20 a.m. A Democratic congressman doesn't want union voters in his home state of Ohio to buy what Donald Trump is selling. Tim Ryan says the Republican presidential nominee is offering "snake oil" with his... 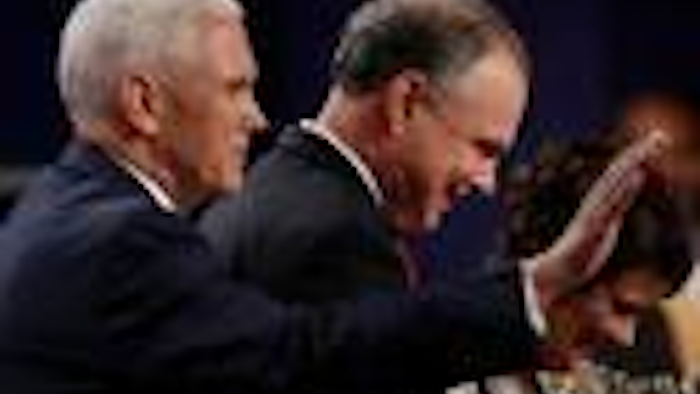 WASHINGTON (AP) — The Latest on the 2016 presidential campaign (All times EDT):

A Democratic congressman doesn't want union voters in his home state of Ohio to buy what Donald Trump is selling.

Tim Ryan says the Republican presidential nominee is offering "snake oil" with his promises to bolster the manufacturing economy. He blasted Trump for using steel and other materials from China in his own building projects.

Ryan was introducing Bill Clinton at a rally in Youngstown. He warned union workers that Trump would "gut you and he will walk over your cold dead body, and he won't even flinch."

About 670,000 Ohio residents in the battleground state are represented by unions. President Barack Obama won the state by about 165,000 votes in 2012.

The Democratic presidential nominee offered two thumbs up when she was asked a shouted question about Kaine's performance. She was at an airport in White Plains, New York, on Wednesday for a flight to Washington.

Donald Trump's campaign manager say Tim Kaine acted "like he had a tic" by mentioning Donald Trump so frequently in the debate.

Kellyann Conway said Trump is preparing "constantly" for his second debate against Hillary Clinton. She told MSNBC's "Morning Joe" that Trump should be "tough but fair" against Clinton in Sunday's debate.

But Conway is acknowledging that Trump needs to avoid getting distracted by fights about peripheral issues. She says Trump has a right to defend himself against attacks, but that he understands he's best when he's talking about Clinton or her record.

Podesta said Wednesday that Trump "lost" even though he wasn't in the debate. He said he doesn't think the debate changed the course of the race.

Podesta said Pence came off as a reasonable and likeable guy, but seemed like he was more focused on his own presidential prospects in 2020 than on Trump's in 2016.

The Indiana governor's remark has quickly become one of the most talked about moments from the primetime forum, trending online under #ThatMexicanThing. Twitter ranks it as the third most tweeted about moment of the debate.

Republican Mike Pence was calm and steady in the face of Democrat Tim Kaine's fiery and frequent challenges. But when it came to defending Donald Trump, Pence dodged, sidestepped or was silent about some of his running mate's most provocative words.

"I can't imagine how Governor Pence can defend the insult-driven, me-first style of Donald Trump," said Kaine, the Virginia senator and Hillary Clinton's No. 2.

The usually easygoing Kaine went on the attack from the start and seemed determined to make the debate a referendum on whether Trump has the disposition for the Oval Office.