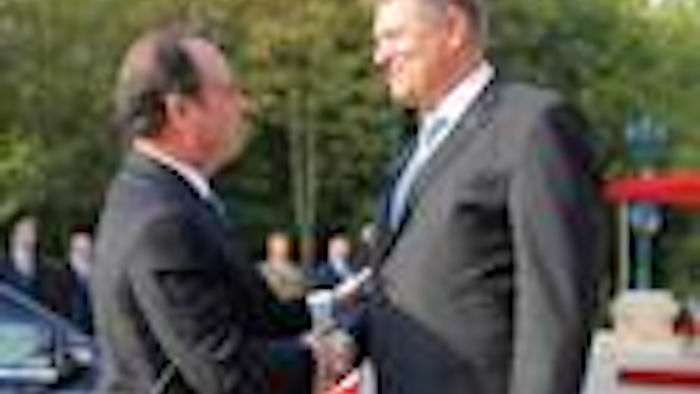 "It is an important structure for our security. For us it is an essential point in the fight against terrorism, and for this reason, there should be discussions in Brussels to see how Romanian airports can bring a contribution to the Schengen space in their efficiency," he said.

Romania has been trying to join Schengen for years, but has failed to secure unanimous agreement required from the 26 members, partly due to concerns about corruption.

Romanian President Klaus Iohannis greeted Hollande's comments positively, saying he felt Romania was supported by France in its bid to join the Schengen area, where there are no passport and other border controls between countries.

Speaking before an EU summit in Bratislava after Britain voted to leave the bloc, Hollande said: "Europe has to be a hope. If it is not a hope, it is no longer Europe. It was a hope for a long time for those in it. It's a market that opened, a currency, a peace, a capacity to have a have voice that is heard all over the world."

However, he added: "this hope has evaporated. We have to renew this hope through the young people of Europe, mobility, research, the possibility of developing, of having a job; that is the priority I will underscore in Bratislava."

Romania and France hope the high-profile visit will also boost trade and consolidate bilateral relations between the traditional allies. France has 450 enterprises and French companies provide 100,000 jobs, while France is the first choice for Romanian students who choose to study at foreign universities, Hollande said.

Hollande laid a wreath at the tomb of the unknown soldier early Tuesday, noting that it was the first state visit by a French president since Jacques Chirac came to Romania in 1997.

Hollande will later inaugurate the Airbus Romania factory in central Romania, which will produce H215 military and civil helicopters, starting next year. It will become fully operational by 2020, manufacturing 15 helicopters a year and creating 350 jobs, company officials said.

The French leader is accompanied by 30 business chiefs.

A previous version of this story was corrected to show that Hollande's visit is the first visit by a French president to Romania since Jacques Chirac came to Bucharest in 1997, instead of an earlier visit by Francois Mitterrand in 1991.