EU, Germany play down reports of US trade talk failure

BRUSSELS (AP) — Both the European Union's lead negotiator in trade talks with the United States and the spokesman for Germany's chancellor on Monday downplayed assertions that negotiations on the proposed landmark pact have collapsed. German Economy Minister Sigmar Gabriel, who is also Germany's... 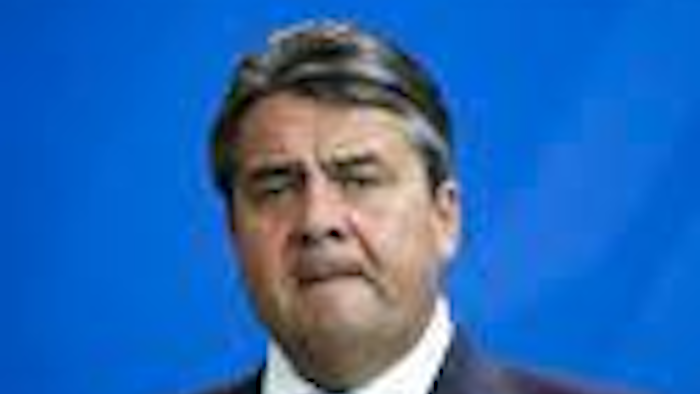 BRUSSELS (AP) — Both the European Union's lead negotiator in trade talks with the United States and the spokesman for Germany's chancellor on Monday downplayed assertions that negotiations on the proposed landmark pact have collapsed.

German Economy Minister Sigmar Gabriel, who is also Germany's vice chancellor, had said Sunday that "in my opinion, the negotiations with the United States have de facto failed, even though nobody is really admitting it."

Asked Monday by The Associated Press whether Gabriel's claims were true, chief EU negotiator Ignacio Garcia Bercero said: "No, no. Remember what Mark Twain said." The American writer once quipped that reports of his death were "greatly exaggerated."

German Chancellor Angela Merkel's spokesman said that while Europe and the United States still disagree over certain parts of a free trade deal, the talks aren't over yet. Steffen Seibert also told reporters in Berlin it is "right to continue negotiating," noting that often a breakthrough is only achieved "in the final round."

Gabriel noted Sunday that in 14 rounds of talks on the massive trans-Atlantic pact, commonly known as TTIP, the two sides haven't agreed on a single common item out of 27 chapters being discussed. His spokeswoman, Tanja Alemany, said her boss's comments were based on the lack of movement on the part of the U.S. and that "he came to the realistic assessment" that there won't be a deal this year.

Asked Monday to comment on Gabriel's remarks, Margaritis Schinas, chief spokesperson for the EU's executive body, the European Commission, told reporters that "although trade talks take time, the ball is rolling right now," and that the EU-U.S. negotiations have entered "a crucial stage."

"Provided the conditions are right, the Commission stands ready to close this deal by the end of the year," Schinas said. He cautioned, though, that the EU's executive is not willing to sacrifice Europeans' "safety, health, social and data protection standards or our cultural diversity" to reach an agreement with the United States.

Under discussion for three years, the proposed Trans-Atlantic Trade and Investment Partnership would create a U.S.-EU free trade zone encompassing half of the world economy. But it still faces significant opposition on both sides of the ocean.

France has said it rejects the plan as it now stands because it is too friendly to U.S. business. Influential American labor leader Richard Trumka, president of the American Federation of Labor and Congress of Industrial Organizations (AFL-CIO), has said the agreement, which aims at harmonizing safety, labor, manufacturing and other regulations across the world's two largest economies, appears aimed at lowering standards, and not improving them.

The June decision by British voters to leave the European Union at a date yet to be determined is another potential complication, though Schinas said Monday the EU's TTIP negotiators continue to deal with the Americans on behalf of all 28 member nations of the bloc.

Trevor Kincaid, a spokesman for the U.S. trade representative's office, has defended TTIP as mutually beneficial and said the differences between the two sides are being worked out.

Frank Jordans in Berlin contributed to this report.