At what was once a remote desert outpost with spotty cell service and little infrastructure other than the shell of a quarter-billion-dollar futuristic hangar, Christine Anderson has watched the transformation of Spaceport America from her office window. The hangar sits just to the south, its... 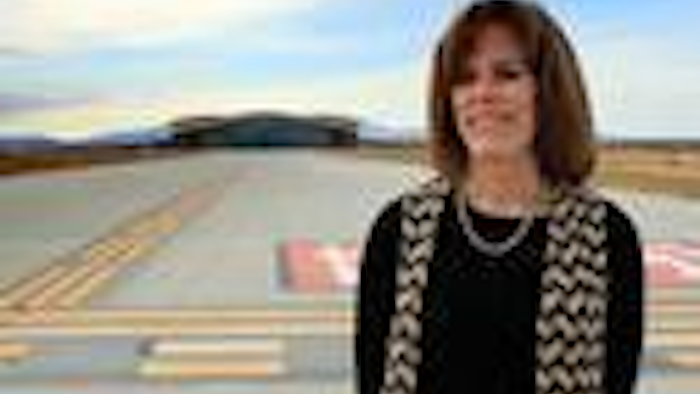 At what was once a remote desert outpost with spotty cell service and little infrastructure other than the shell of a quarter-billion-dollar futuristic hangar, Christine Anderson has watched the transformation of Spaceport America from her office window.

The hangar sits just to the south, its patina metal paneling and glass walls rising from the valley floor.

"I always get inspired," she said of being at the spaceport. "It sounds so trite, 'the dawn of the new space age,' but you know it really is. I think it's just going to be amazing what we in our lifetime get to see happening in this industry."

Even though commercial flights at Spaceport America have yet to begin, Anderson — executive director of the New Mexico Spaceport Authority — says her job is done as the spaceport stands ready for anchor tenant Virgin Galactic and other companies working in the industry.

Anderson announced her resignation this summer. Her last day is next week, and the search is underway for her successor.

Anderson told The Associated Press the decision to leave was difficult but noted she initially signed up for only a year. She has served in the position now for more than five years.

It hasn't been easy. There were numerous contracts to manage during a rocky construction period. Then there were delays and other setbacks as Virgin Galactic worked to develop and test its spacecraft.

Some state legislators called for pulling the plug, adding fuel to criticisms that the project — first initiated by former Gov. Bill Richardson, a Democrat, and British billionaire Richard Branson — was a boondoggle.

Anderson was grilled at legislative hearings. She held fast to the idea that the spaceport would be a game changer for New Mexico.

"There are naysayers," she said. "I think you just have to maintain the high road with all of that because it's an important project, and with any new thing — this whole spaceport business is new — you just have to have patience."

Spaceport Authority board chairman Rick Holdridge praised Anderson after news broke of her resignation. He said she took a collection of contracts that were barely in place and built a fully functional spaceport.

"I don't think the people of New Mexico realize what she has done for the state," he said.

After beefing up its business plan more than a year ago, the spaceport has attracted new customers and hosted events for the public. The next open house will be in October.

Officials also are in discussions with three major aerospace companies interested in using it as a testing ground.

Many companies have nondisclosure agreements that prevent spaceport officials from talking about the projects being conducted at the facility, Anderson said.

While the names may remain secret, Anderson said the effect on the bottom line is welcome. Spaceport America is on track this year to have three-quarters of its operating budget covered by revenues. Next year, that's projected to be 90 percent.

The goal is to have operations paid entirely by lease revenues and other user fees given that the state and taxpayers in southern New Mexico already have contributed about $220 million to construct what is the nation's first purpose-built spaceport.

Another six rocket launches are planned over the next six months, and the spaceport is readying to serve as a base for a major project with Boeing and the adjacent White Sands Missile Range as researchers work on a transportation system that can shuttle cargo and astronauts to the International Space Station.

After starting with little, Anderson said the spaceport is on the right track.

Stretching across 28 square miles of the Jornada del Norte desert basin north of Las Cruces, the spaceport also benefits from thousands of square miles of restricted air space belonging to the missile range.

"They value the privacy and our airspace and our 24-7 security," she said. "This is a competitive industry, and they're doing a lot of aerospace testing that they don't want other people to necessarily keep tabs on."

Anderson, who spent 30 years with the U.S. Air Force as a civilian before heading up the spaceport authority, said the one thing she'll miss is being in the front row as the burgeoning industry grows.

The tons of files and boxes of notes she has amassed have been handed down to her crew.

"I thoroughly believe in the commercial space industry, and I think we've gotten to that place where we can pass the baton," she said.