NORFOLK, Va. (AP) — Robin Starck is a retired submarine commander who still lives in the shadow of America's largest naval base, and he's heard all the shouting about Donald Trump and his tangle with the parents of a U.S. Army officer killed in Iraq. Doesn't matter. He's still for Trump. "Trump... 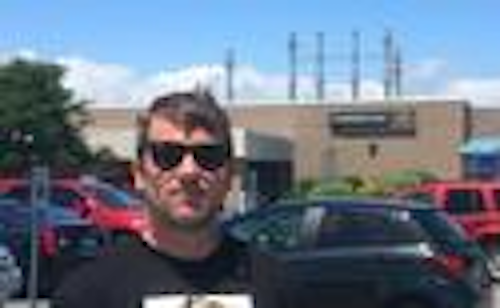 NORFOLK, Va. (AP) — Robin Starck is a retired submarine commander who still lives in the shadow of America's largest naval base, and he's heard all the shouting about Donald Trump and his tangle with the parents of a U.S. Army officer killed in Iraq.

"Trump goes to the extreme," said Starck, 79. "Sometimes he goes off the wall." But he added, "I don't see myself changing my mind."

The Hampton Roads area of Virginia — home not only to Naval Station Norfolk, but a vast collection of defense contractors, including the shipyards that build America's aircraft carriers — has been a Trump stronghold. The New York billionaire won most of the counties that make up the area along the James River in Virginia's March 1 primary.

It's the sort of place where Trump's days of criticism of Khizr and Ghazala Khan, a Muslim-American family whose son, Capt. Humayun Khan, was killed while serving in Iraq in 2004, might be expected to alienate people, many with deep and personal ties to the military.

But Starck is one of several interviewed by The Associated Press this past week who said they have other concerns that are keeping them loyal to Trump, among them picking a conservative Supreme Court justice to replace the late Antonin Scalia and getting rid of President Barack Obama's health care law, which Hillary Clinton pledges to defend.

The fight with the Khans was a "big mistake," Starck said, but it was also blown out of "proportion."

The feud was set off when Khizr Khan, his wife silent at his side, denounced Trump from the stage of the Democratic National Convention for his views about Muslims. Trump responded angrily and would not back down even as many Republicans expressed revulsion that he would fight with the family of a slain soldier.

Jacob Jeske, 28, a commercial diver from Portsmouth, said the episode was not a "big deal to me."

"He means well," Jeske said. "He's just going by his emotions. He's not sitting there and thinking about it."

Jeske believes a Trump presidency would mean more work for him, given the candidate's promises to invest deeply in the military. As a diver, Jeske often makes his living by helping to maintain Navy ships.

"Trump knows that the military comes first, before any refugees or anyone else," he said.

"If he's going to build a strong military, all the other issues go away," said Cormier, who is stationed in Norfolk. "That directly bears on my job. I don't even watch the news anymore, because it's all mudslinging and people getting shot."

Not all said they could look past Trump's fight with the Khans, joining with the many senior Republicans who condemned his remarks and urged him to apologize. Republican Scott Taylor, a former Navy SEAL who is running for Congress in Hampton Roads, is one.

"Donald Trump's back and forth engagements with the Khans are counterproductive," Taylor said this past week in a statement. "I encourage him to sincerely apologize to them and to end this issue now."

Another is James Atticus Bowden, a retired Army officer and the president of a defense consulting company, who said Trump was "classless to fuss at a Gold Star family" and should "just keep his mouth shut."

But Bowden, who supported Texas Sen. Ted Cruz in Virginia's primary and is still undecided about whom to vote for in November, said his bigger concern is Trump's lack of military service. Trump received five draft deferments during the Vietnam era, one of which stemmed from temporary bone spurs in his feet.

Carolyn Hersh, 52, a psychotherapist from Portsmouth, said she can no longer vote for Trump after the Khan controversy.

"He shouldn't have taken it personally," said Hersh, whose husband is a former Navy doctor. "Coming from a military community, that was just (too much)."

But voting for Clinton is not an option for Hersh. She said she has too many concerns about the economy, which include government spending on entitlement programs, to cast her ballot for the Democratic nominee.

"I would have voted for him a couple weeks ago — not happily, but I would have," Hersh said of Trump. "I've never not voted. But that's something that's on the table."