WASHINGTON, D.C. (AP) — The U.S. government is suing to stop two major health insurance mergers, a move regulators say is needed to protect Americans from potential cost hikes and lower quality care. The Department of Justice said Thursday that the combinations of Aetna and Humana and Anthem and... 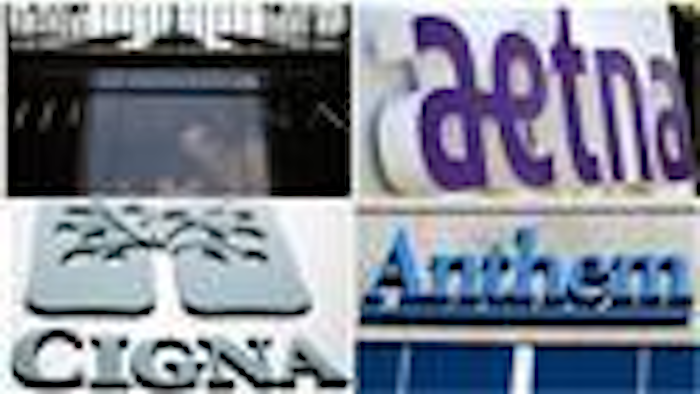 The Department of Justice said Thursday that the combinations of Aetna and Humana and Anthem and Cigna would hurt competition that restrains the price of coverage and reduce benefits, among other drawbacks.

Consumers have been dealing with rising health care costs for years, a result of several factors. Prices for prescription drugs and care have risen, and as they have, insurers — who ultimately pay most of the bill — have raised premiums and out-of-pocket expenses like deductibles to shift more costs to consumers and help protect their own bottom lines.

The big insurers argue that by getting larger they will be able to negotiate better prices with pharmaceutical companies, hospitals and doctor groups that also are growing. They also expect to cut expenses and add more customers, which helps them better spread the cost of investing in technology to manage and improve care.

In recent years insurers have invested in more elaborate technology to help customers find the most appropriate doctors and care providers and to help them take their medicines and manage their care, which can improve health and cut costs.

But it's unclear how much the savings from these improvements would filter down to the customer, especially if there are fewer insurers competing for business.

"There's no reason to give those savings to their customers unless someone else is pushing you," said Gary Claxton, a vice president with the nonprofit Kaiser Family Foundation, which studies health care issues.

Regulators were worried about how the deals will affect competition in three areas in particular: coverage offered by large employers, insurance sold on the Affordable Care Act's public exchanges and Medicare Advantage plans, which are privately run versions of the government's Medicare program for the elderly.

"They do not need these deals to survive, and consumers are entitled to benefit from their continued competition," he said.

Analysts who follow the industry say that when insurers grow big nationally it doesn't necessarily mean they dominate the local markets where their products are sold because there are so many regional insurers. They've also said that the insurers could sell off some of their business to ease concerns regulators might have.

But Baer said what the insurers offered to sell wasn't enough.

Industry experts say any impact from the deals on consumers would take years to materialize and could lead to savings in some areas, along with the risk of higher costs elsewhere.

The Justice Department has pushed aggressively in recent years to block deals in several industries that they say will reduce competition. It sued last year to stop the Swedish company Electrolux from buying General Electric's appliance division. It also sued over a planned $34 billion merger of oil and gas service companies Halliburton and Baker Hughes. Electrolux and Halliburton later abandoned those deals.

Morningstar analyst Vishnu Lekraj said he's not sure how much stomach the insurers will have for a protracted legal battle. He thinks they eventually will walk away from these deals and hunt for smaller acquisitions that give them a presence in new markets.

"In order for these firms to succeed longer term, they need to build scale," he said.

Shares of all four health insurers jumped Thursday after the Justice Department announced the lawsuit. The stocks had slumped in recent weeks as investors waited to learn what regulators would decide.