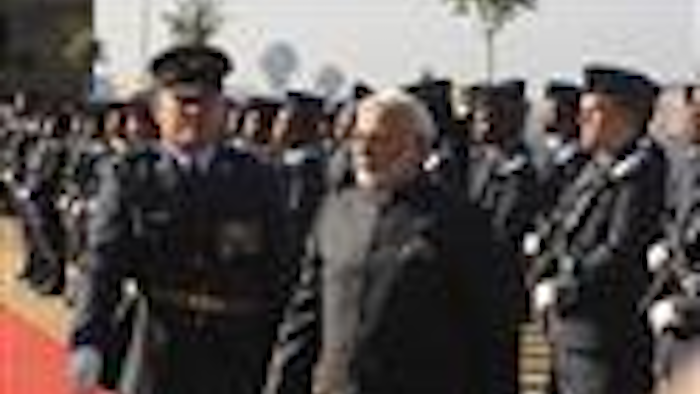 Modi paid tribute to the "great souls" of Indian independence leader Mohandas K. Gandhi and South Africa's first black president, Nelson Mandela. On Saturday, Modi is expected to take a train journey to commemorate Gandhi, whose experience with racism while living in South Africa as a young man shaped his philosophy of nonviolent protest.

"It was in South Africa that Gandhi found his true calling," Modi said. "He belongs as much to India as to South Africa."

Later on Friday, Modi was scheduled to meet with members of South Africa's community of Indian origin, which numbers more than 1 million people and is one of the largest parts of the Indian diaspora.

The Indian prime minister also plans to visit Tanzania and Kenya as he seeks to raise India's profile on a continent where China's investment has been strong.

After talks with Zuma, Modi said security is one sector witnessing "a complete transformation" in India. "Our companies can pool their capacities to jointly develop or manufacture defense equipment and platforms," he said.

Zuma said his country is hoping to increase and diversify South African exports to India. "We have identified new areas for market access including the defense, deep mining, renewable energy and health sectors," he said.

Zuma did not explicitly endorse India's efforts for a permanent seat on the U.N. Security Council but said South Africa would work with India on reforming the council.