Clinton wins endorsement of the AFL-CIO

WASHINGTON (AP) — Hillary Clinton on Thursday won the endorsement of the AFL-CIO, the nation's largest labor federation, giving her a powerful voter turnout engine against Donald Trump. The Republican businessman swiftly accused labor leaders of selling out its membership to a candidate he said... 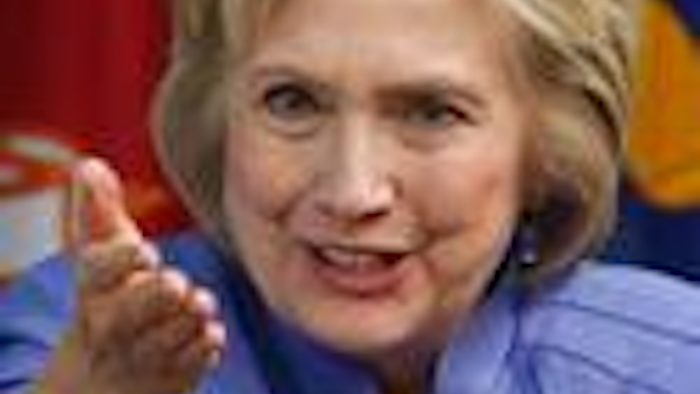 WASHINGTON (AP) — Hillary Clinton on Thursday won the endorsement of the AFL-CIO, the nation's largest labor federation, giving her a powerful voter turnout engine against Donald Trump. The Republican businessman swiftly accused labor leaders of selling out its membership to a candidate he said was aligned with Wall Street.

The exchange underscored Trump's efforts to win over blue-collar workers who typically support Democrats, especially those in Midwest battleground states whose wages have stagnated and have been hurt by a decline in manufacturing jobs.

The AFL-CIO's general board voted to endorse Clinton over Vermont Sen. Bernie Sanders, a move that had been expected after Clinton secured enough support among delegates to become the presumptive Democratic nominee.

"Hillary Clinton is a proven leader who shares our values," said AFL-CIO President Richard Trumka in a statement. "Throughout the campaign, she has demonstrated a strong commitment to the issues that matter to working people, and our members have taken notice."

A short time later, Trump fired back with a statement that said the endorsement was a sign the union federation "no longer represents American workers."

"Instead," he added, "they have become part of the rigged system in Washington, D.C. that benefits only the insiders."

For months, Trump has denounced "stupid" trade deals that he says hurt U.S. workers and pledged to penalize companies for sending jobs overseas. For that reason, he predicted Thursday, the AFL-CIO's members would vote for him "in much larger numbers than" Clinton in November's general election.

Trump's statement included a number of falsehoods the billionaire businessman has repeated in recent weeks as he seeks to draw a contrast with Clinton. Among them, the incorrect allegation that Clinton's immigration proposals would "completely open America's borders in her first 100 days in office."

Trump also said that if elected, Clinton would implement the Trans-Pacific Partnership trade deal. While Clinton promoted the agreement dozens of times as secretary of state, she has since said she cannot support the deal in its current form.

She has said she backs trade deals only if they fulfill a three-pronged test of creating "good" jobs, raising wages and improving national security.

He also misleadingly claimed that as secretary of state, Clinton "racked up a $1 trillion trade deficit with China." In her role as the nation's top diplomat, Clinton had no direct control over the difference in the cost of U.S. imports from China versus its exports to the nation.

The labor federation represents 12.5 million members and is a potent force in Democratic politics and voter turnout. Union leaders have been gearing up for a general election showdown against Trump, whom they portray as a threat to working families but fared well among blue-collar voters during the GOP primaries.

"This election offers a stark choice between an unstoppable champion for working families and an unstable charlatan who made his fortune scamming them," said Lee Saunders, the president of AFSCME and the chair of the AFL-CIO political committee.