HARRISBURG, Pa. (AP) — A onetime top aide to former Democratic Gov. Ed Rendell snared in an FBI sting pleaded guilty Tuesday after he was caught pocketing thousands of dollars in supposed campaign contributions from a fake company set up by the FBI to investigate public corruption in Pennsylvania.... 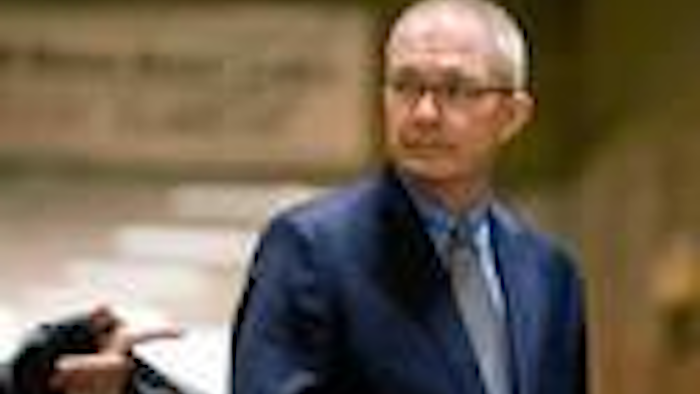 HARRISBURG, Pa. (AP) — A onetime top aide to former Democratic Gov. Ed Rendell snared in an FBI sting pleaded guilty Tuesday after he was caught pocketing thousands of dollars in supposed campaign contributions from a fake company set up by the FBI to investigate public corruption in Pennsylvania.

John H. Estey said little in front of Judge John E. Jones, and federal prosecutors revealed nothing more about the sting. Left unanswered are questions about what led the FBI to Estey, whether any other targets took the bait and whether Estey cooperated in recording the conversations of other potential targets.

Asked by Jones during the 30-minute hearing whether he intended to plead guilty to wire fraud, Estey said, "I do, your honor."

Jones set no sentencing date for Estey, 53, who had been prominent in Pennsylvania's political and legal circles. When the plea agreement made the case public April 29, Estey was promptly fired from his senior executive post at the $12 billion Hershey Trust Co., which oversees the majority stake in The Hershey Co.

The plea agreement said Estey faces a maximum sentence of 20 years in prison and a $250,000 fine, but Assistant U.S. Attorney Michael Consiglio told Jones that prosecutors will recommend a lighter sentence if Estey accepts responsibility.

Asked later if prison time is likely for Estey, Consiglio said that will be up to the judge.

The case has fueled speculation that Estey led investigators to former state Treasurer Rob McCord, who resigned his post and pleaded guilty to federal extortion counts last year after he was recorded in 2014 trying to strong-arm contributions to his failed gubernatorial campaign.

Former federal prosecutors say the extent of the FBI operation leads them to believe that investigators had significant intelligence about wrongdoing and that a successful sting would yield more arrests.

In court filings, federal prosecutors said the FBI set up the fake company, which they did not name, to investigate allegations of public corruption. They did not reveal the nature of those allegations, but agents posing as its executives first made contact with Estey in 2009, after he had left the Rendell administration. Estey represented the company through mid-2011 as an owner of an unidentified Philadelphia-based lobbying firm, court papers said.

The plea agreement said Estey told agents in 2011 that lawmakers would help the phony company in exchange for $20,000 in campaign contributions.

The Philadelphia Inquirer identified the FBI's front company as the Florida-based Textbook Bio-Solutions LLC, which spent about $135,000 on lobbyists, records show. One of the phony executives, named "John Miles," even gave $15,000 in campaign contributions, the Inquirer reported.

The front company even won the Senate's unanimous passage in 2010 of legislation to require state schools and universities to dispose of unwanted textbooks through "certified" recycling centers that Textbook Bio-Solutions wanted to run, the Inquirer reported. It did not see House action and never became law.

Corporate campaign donations are illegal in the state, as is tying campaign donations to promises by public officials to take any sort of official action. Estey had agreed to distribute the donations in a way that would hide the company's role, but ended up keeping $13,000 for his use after distributing just $7,000 to lawmakers, court papers said.

Prosecutors have not detailed which lawmakers received the $7,000.