This Is The Robot Exploring The Deepest Parts Of The Ocean 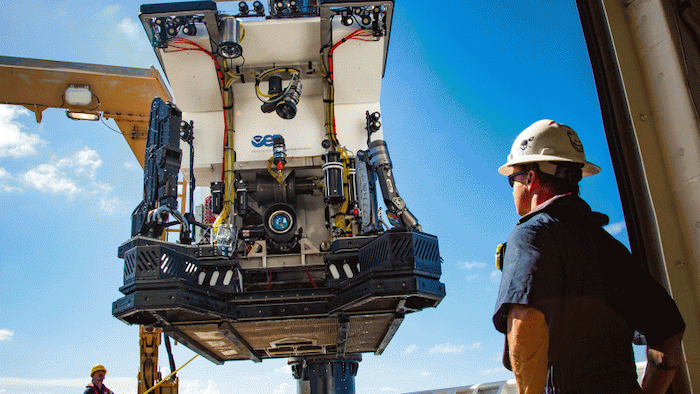 ROV Deep Discoverer (D2) will be used to conduct daily dives from 250 to 6,000 meters on Legs 1 and 3 of the 2016 Deepwater Exploration of the Marianas expedition. (Image courtesy of the NOAA Office of Ocean Exploration and Research.)

The Mariana Trench is one of those places on earth that been a tantalizing mystery for humans since its discovery. What lives at that ocean depth? Or don't we want to know?

Located in the Pacific Ocean, east of the Mariana islands, the trench has a maximum known depth of 6.8 miles (36,070 feet) below sea level. It's not a very wide trench, averaging just 43 miles across, but it's about 1,580 miles long. As if the massive geographical footprint is challenging enough, at that depth pressure is around 15,750 psi and the temperature ranges between 33° to 39°F.

The mystery of what lives in the trench has captivated researchers since the trench was first discovered in 1875. To date, there have been several descents including the bathyscaph Trieste in 1960, the ROV Kaikō in 1996 and the ROV Nereus in 2009. The most recent descent began in April with Deep Discoverer. It's a joint effort between the National Oceanic and Atmospheric Administration, Oregon State University and the U.S. Coast Guard.

The Deep Discoverer lives aboard the converted former Navy Ship the USNS Capable, which was transferred to NOAA and re-commissioned in 2010 as the Okeanos Explorer. The ship's main attribute is that it is home to the only permanent remotely operated vehicle in NOAA's fleet. Perhaps even more interestingly, is that the Okeanos Explorer also features a heavy investment in telepresence, so its capable of communicating with a team that is mostly on shore. 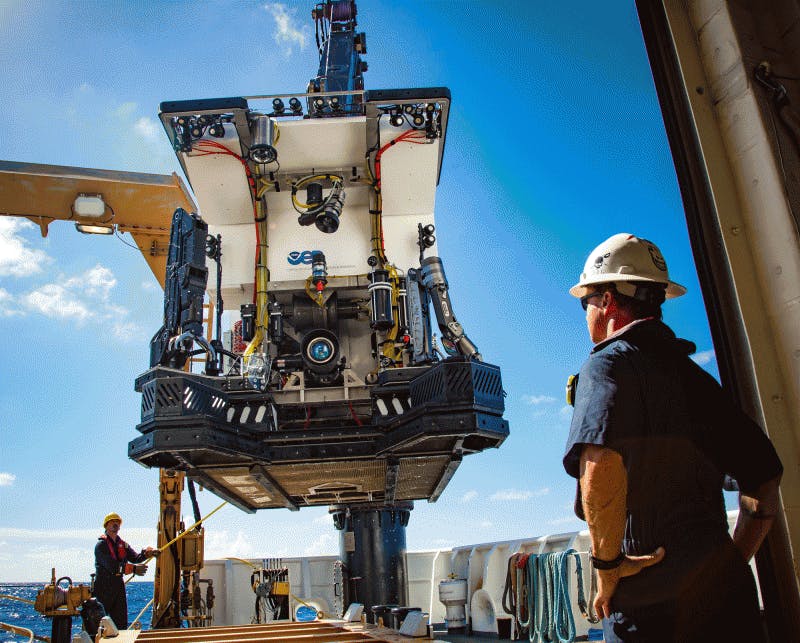 ROV Deep Discoverer (D2) will be used to conduct daily dives from 250 to 6,000 meters on Legs 1 and 3 of the 2016 Deepwater Exploration of the Marianas expedition. (Image courtesy of the NOAA Office of Ocean Exploration and Research.)

Recently, NOAA has been using the Deep Discoverer to send back some images of things that go bump in the night (which is all the time at that depth) in the Mariana Trench and also providing everyone with a live feed of the Okeanos Explorer.

Beginning April 10 and continuing until July 10, the researchers are conducting a three-cruise mission to record information about the trench and surrounding area, including data about bottomfish habitats, mud volcanoes, deep-sea corals, and subduction zones. The team is currently at the tail end of the first leg of the trip, which spans from April 20 to May 11, focused on the southern parts of the trench.

They'll be gathering this information using the Deep Discoverer, a 9,000 pound ROV offers up nine video camera, 20 LED lights , and over 3,000 feet of electrical wiring. It's sister vehicle, Seirios offers up light so Deep Discoverer can see what its doing.

The team has already captured some bizarre, but cool images of the creatures that call the trench home.