The Latest: US has 'profound interest' in UK staying in EU

MUNICH (AP) — The Latest on the security conference in Munich (all times local): 5:55 p.m. U.S. Secretary of State John Kerry says Washington has a "profound interest" in Britain remaining a member of the European Union. British Prime Minister David Cameron hopes to secure a deal with the EU's... 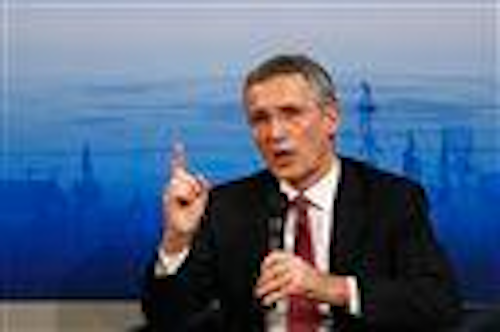 MUNICH (AP) — The Latest on the security conference in Munich (all times local):

U.S. Secretary of State John Kerry says Washington has a "profound interest" in Britain remaining a member of the European Union.

British Prime Minister David Cameron hopes to secure a deal with the EU's other 27 member nations at a Feb. 18-19 summit for a looser union with the bloc. He then plans to hold a referendum in Britain on whether it should stay in the EU.

Kerry underlined Washington's hopes that Britain will stay in the EU on Saturday at the Munich Security Conference. The U.S. diplomat acknowledged that "many Europeans feel overwhelmed by the latest round of challenges, including concerns about the U.K.'s potential exit from the EU."

Kerry added: "Obviously, the United States has a profound interest in your success, as we do in a very strong United Kingdom staying in a strong EU."

NATO Secretary General Jens Stoltenberg tells The Associated Press that all moves have been in direct response to Russian actions. He says Saturday that "NATO does not seek confrontation and we do not want a new Cold War, but we had to respond to the Russian military buildup, which we have seen over several years."

NATO has been conducting more military maneuvers in countries bordering Russia as well as stationing equipment and multi-national troops there, and has also established a rapid-reaction force.

But Stoltenberg emphasized NATO's continuing political dialogue with Russia, saying he talked with Russian Foreign Minister Sergey Lavrov on Friday about the possibility of a NATO-Russia Council meeting.

Russia's foreign minister says that all sides in Syria's civil war are violating humanitarian law and that President Bashar Assad shouldn't be demonized.

Sergey Lavrov said a security conference in Munich Saturday that the majority of civilians under siege in Syria are being besieged by the opposition. He said that human rights groups and the U.N. "recognize that everyone on the ground is doing something which is wrong from the point of view of humanitarian law."

He added: "My point is you should not demonize Assad. You shouldn't demonize anyone except terrorism in Syria."

Lavrov also said that it's possible to make "a breakthrough, a first step" now in delivering humanitarian aid but "sustainable delivery" of supplies can be secured only during a political process.

Russia's foreign minister says coordination between the Russian and U.S. military is needed to make a truce in Syria work.

Sergey Lavrov said Saturday that everyday military cooperation between those two countries in particular is "the key tool" to ensuring delivery of humanitarian supplies and an end to hostilities. He complained coordination hasn't gone beyond an agreement to avoid in-air incidents.

Lavrov said: "if we are moving closer to practical goals of (a) truce, then without cooperation between the military nothing will work out."

Pressed by conference moderator Wolfgang Ischinger to say how confident he is on a 1-100 scale that a "cessation of hostilities" will be implemented within a week as planned, Lavrov replied: "49." British Foreign Secretary Philip Hammond, sitting alongside Lavrov, said it sounded more like "somewhere close to zero."

President Andrzej Duda spoke at the Munich Security Conference on Saturday after Russia's Prime Minister Dmitry Medvedev accused the West of rekindling the Cold War. Duda said the top issue for Poland now is strengthening NATO's presence in the east and added: "Our security, military security especially, is now the most important when we see the situation for example in Ukraine and when we heard from the Russian politicians, like today."

Ukraine's president says Russia is living in a "completely different universe" and is pointing to the risk of an "alternative Europe" led by Russian President Vladimir Putin.

Poroshenko blasted Russia's actions in Ukraine and Syria and said they are "a demonstration that we live in a completely different universe with Russia."

Russian Prime Minister Dmitry Medvedev has drawn a link between the terrorist threat and the influx of migrants to Europe.

"Under (the) disguise of refugees, hundreds and thousands of extremists are infiltrating other countries," he said. "Sometimes these are people with different culture who would like to get benefits and do nothing. There is a real threat of the destruction of the destruction of a single economic space followed by cultural space and even the very European identity."

Russia's prime minister has insisted that there's no evidence his country is bombing civilians in Syria after his French counterpart called for an end to such attacks.

Government forces, aided by a Russian bombing campaign, are trying to encircle rebels in Syria's largest city Aleppo and cut off their supply route to Turkey.

French Prime Minister Manuel Valls, speaking alongside Russia's Dmitry Medvedev at a security conference in Munich, said France respects Russia's interests but "to return to the path of peace and discussion, the bombing of civilian populations must cease."

Medvedev said Saturday that "there is no evidence of our bombarding civilians even though everyone is accusing us; that's just not true." He added that "we need an exchange of information, our military have to be in constant contact."

Russia's prime minister is accusing the West of rekindling the Cold War, saying sanctions imposed after the annexation of Crimea and new moves by the NATO alliance "only aggravate" tensions.

Dmitry Medvedev said Saturday that Russian President Vladimir Putin told the same Munich Security Conference in 2007 that the West's building of a missile defense system risked restarting the Cold War, and that now "the picture is more grim; the developments since 2007 have been worse than anticipated."

"NATO's policies related to Russia remain unfriendly and opaque — one could go so far as to say we have slid back to a new Cold War," he said. "Sometimes I wonder if it's 2016 or if we live in 1962."