NEW YORK (AP) — The E. coli outbreak that was linked to Chipotle restaurants may be over, but the burrito chain's indigestion continues. As Chipotle reported continuing sales declines on Tuesday, the embattled chain also said the scope of a previously disclosed federal criminal investigation has... 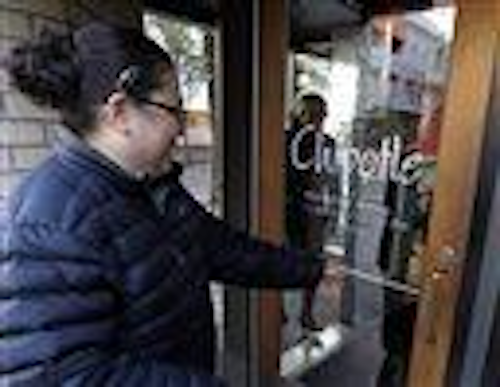 NEW YORK (AP) — The E. coli outbreak that was linked to Chipotle restaurants may be over, but the burrito chain's indigestion continues.

As Chipotle reported continuing sales declines on Tuesday, the embattled chain also said the scope of a previously disclosed federal criminal investigation has widened beyond a single restaurant in California.

The Denver company says sales sank 36 percent at established locations in January. That follows a previously reported drop of 14.6 percent for the October-to-December period, which marked the first quarterly decline since Chipotle went public a decade ago.

Chipotle Mexican Grill Inc. also said it has been served with another subpoena requiring it produce documents related to company-wide food safety dating back to the start of 2013. Previously, it had said it was served a subpoena in relation to a California restaurant, where there was a norovirus outbreak over the summer.

Montgomery Moran, co-CEO of Chipotle, said he believed investigators wanted to make sure "everything we did was on the up and up." He also said he thinks that will be the ultimate conclusion at the end of the case.

A representative for the U.S. Attorney's Office for the Central District of California, which is conducting the investigation with the Food and Drug Administration, declined to comment.

Chipotle has been reeling since an E. coli outbreak linked to its restaurants came to light at the end of October. The outbreak sickened people in 11 states. Then in December, a norovirus outbreak at a Boston location heightened customer fears about the safety of the chain's food. Sales at established locations dropped 30 percent that month.

Now, Chipotle is pushing to move past its troubles and win back customers. The company has announced a series of new food safety measures, such as blanching onions before chopping them and stepped up testing of ingredients. And this week, it noted that the Centers for Disease Control and Prevention declared the E. coli outbreak to be over.

Co-CEO Steve Ellse said Tuesday the company was "pleased to have this behind us."

As such, Chipotle executives said they plan to launch the company's biggest marketing effort ever next week. It will encompass outdoor, print and radio advertising.

On Monday, the company also plans to open stores at 3 p.m., rather than the usual 11 a.m., so workers can participate in a company-wide meeting on food safety.

For the period ending Dec. 31, Chipotle opened 79 new restaurants, bringing its total to 2,010 locations. The new locations helped make up for the sales declines at existing locations.

Total revenue fell 7 percent to $997.5 million in the period. Analysts expected $1.01 billion, according to FactSet.

Shares of Chipotle fell 8 percent to $436 in after-hours trading. The stock is down more than 30 percent since the end of October.