BEIJING (AP) — Joysticks at their fingertips, the mostly male students packing the classroom lift their virtual helicopters into the air, part of a new cottage industry that's sprung up in China: drone pilot schools. China is already the world's biggest drone manufacturer, churning out... 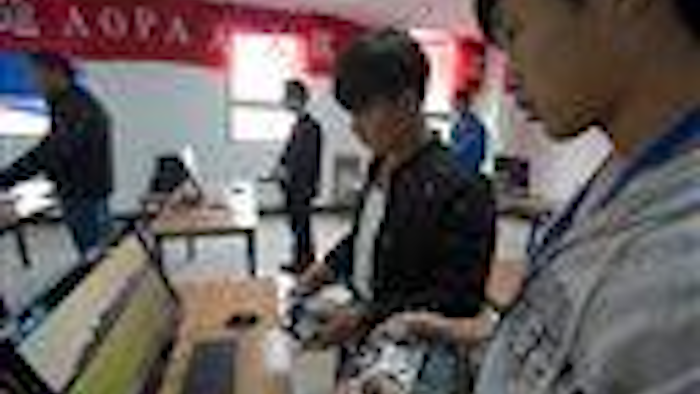 BEIJING (AP) — Joysticks at their fingertips, the mostly male students packing the classroom lift their virtual helicopters into the air, part of a new cottage industry that's sprung up in China: drone pilot schools.

China is already the world's biggest drone manufacturer, churning out remote-controlled flying machines that range from 3-D urban mappers to tear-gas spraying models for police. But it lacks qualified pilots to fly them.

Young men in particular are flocking to drone schools such as TT Aviation Technology Co., one of more than 40 in China, hoping to land a potentially lucrative job in an exciting new field.

TT Aviation offers a two-week intensive course for 8,000 yuan ($1,200) where students learn regulations and how to pilot using simulators and real drones. At the end of the course, they can try to earn the license required by China's Civil Aviation Administration to operate drones that are heavier than 7 kilograms (15 pounds) and fly higher than 120 meters (400 feet).

Xu Honggang, 24, believes the license will open doors to piloting jobs that make at least 5,000 Chinese yuan per month ($780), higher than average. Some experienced pilots bring in double that amount, he said.

"I want to build my own company with drone services," Xu said one recent afternoon next to a grassy field where his instructor demonstrated basic moves with a small radio-controlled helicopter. "I like to work for myself. This is a new and popular line of work."

The opportunities appear promising. More than 10,000 new pilots are needed this year across all industries in China, but only 1,000 pilots now hold licenses, said Yang Yi, the general manager of TT Aviation, which also manufactures and sells drones to private and public sector customers.

"The drone pilot and the car driver are the same: They both need systematic skill training and regulated studying to make sure everyone knows the rules before the real operation," she said.

Drones are touted as game-changers in a range of industries, including agriculture, logistics, film production and law enforcement.

The sector has gotten support from the central government, which is keen on promoting robotics and automation to sustain economic growth as labor costs rise. Chinese firms are making inroads producing unmanned machines beyond industrial use as well. Baidu, the Beijing-based search engine, is developing a self-driving car while DJI, a Shenzhen-based drone maker valued by U.S. investors at $8 billion, has cornered more than half the world consumer drone market.

So far, more than half of TT Aviation's products are used in agriculture. China has vast farmlands, and there is a high demand for drones to be used in pesticide spraying because the labor force is shrinking even as labor costs rise, said Yang.

The company said police will use drones for patrols, while utilities use them for maintaining electricity infrastructure or mapping pipelines.

The Shandong Qihang Surveying and Mapping Technology Company has used photographs taken by its drones to build vast urban databases and 3-D models of cities. Every building can be catalogued, with information about the people and businesses behind every window stored in a database — a valuable technology for government bodies like the census bureau, urban planners and public security agencies, said company vice president Wu Haining.

"With oblique photograph technology and through cooperation with the government, people will be able to check any uploaded personal information in a room from any building in our 3-D map," said Wu, whose company also produces surveillance drones with five cameras.

The rapid development of new types of drones requires a pool of trained and specialized drone operators, Wu said.

Even as drones offer law enforcement sharply expanded capabilities, authorities in China, as in many other countries, are scrambling to regulate their use. The country is now beginning to set nationwide regulations on where they can fly, which are applauded by many in the Chinese industry.

"We need pilots with licenses, because safety is the biggest concern in the operation of drones. Although we have insurance, we still need strict regulations for studying and training to avoid any incidents," Wu said.

On a recent afternoon, a group of drone-flying aficionados tried out their models in the outskirts of Beijing near the city's 6th Ring Road, a highway around the city about 15 to 20 kilometers (8-12 miles) from the city center. The capital requires permission to fly a drone inside that ring.

"This is only a toy for entertainment, I won't use this for any other purpose," said Sun Xiaoqiang, a Beijing resident who has been flying drones for two years, when asked about the regulations.

"I have no bad intentions, it's only for entertainment, so I think they should open a certain airspace for us."