PARIS (AP) — France welcomed Iranian President Hassan Rouhani on Thursday with a long-term car-making agreement and pledges to boost trade now that a diplomatic deal is easing nuclear tensions. Yet clouds hung over the historic outreach trip. France has asked its European Union partners to... 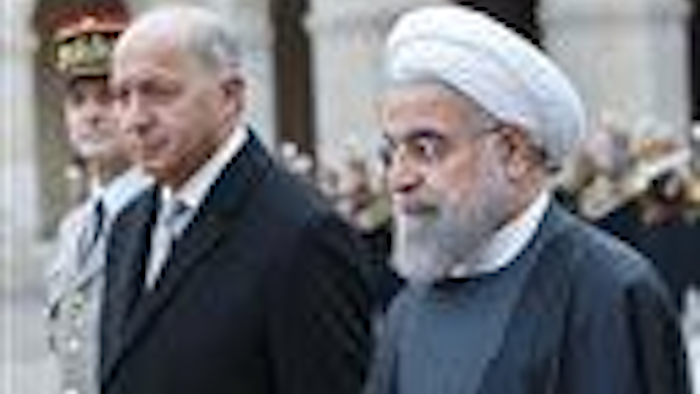 Yet clouds hung over the historic outreach trip. France has asked its European Union partners to consider new sanctions on Iran for its recent ballistic missile tests, officials have told The Associated Press. That highlights continued suspicions between Iran and the West despite the recent agreement curbing Iran's nuclear program that prompted the lifting of earlier sanctions.

Rouhani arrived in Paris on Wednesday from Rome, where billions of euros' worth of trade deals were reached, and was formally greeted Thursday morning at the gold-domed Invalides monument that houses Napoleon's tomb.

French Prime Minister Manuel Valls said the countries should forget past rancor. "France is available for Iran," he said. "Iran can count on France."

Rouhani's visit was also met with protests, notably over executions in Iran. A nearly naked woman hung from a fake noose off a Paris bridge Thursday next to a huge banner reading "Welcome Rouhani, Executioner of Freedom."

But the thrust of the trip was about improving economic and diplomatic relations after years of isolation for his country of 80 million people.

Rouhani said his country is "favorable terrain" for resumed trade between East and West, as he and Valls pledged to turn the page on past tensions.

Rouhani, speaking to French executives, urged efforts to unblock financing for resumed trade now that sanctions over Iran's nuclear program have been lifted. Continued U.S. bank restrictions against Iran are a hurdle to many European companies seeking renewed commerce.

France's Peugeot-Citroen announced a joint venture with automaker Iran Khodro to make 200,000 cars a year outside Tehran. Carlos Tavares, chairman of the PSA Peugeot-Citroen managing board, said it will be a 50-50 joint venture, aiming to produce three new models of cars starting late next year.

"We must go beyond those wounds" caused by sanctions, Tavares said. Peugeot was a major player in Iran's car market before the sanctions were imposed.

France's state rail company SNCF also announced a deal, and other French companies were expected to follow later Thursday, when Rouhani and President Francois Hollande oversee the signing of about 20 bilateral agreements.

Air France is resuming Tehran flights in April, and an Iranian state newspaper said other European airlines are planning the same.

The EU and the U.S. lifted sanctions on Tehran on Jan. 16 in exchange for U.N. certification that Iran had scaled back its nuclear programs. Iran maintained those programs were peaceful but critics feared it wanted to build nuclear weapons. But Iran's latest ballistic missile tests prompted new U.S. sanctions.

While France has asked EU partners about possible new sanctions over those tests, too, the French government is also hoping to draw in Iran's help in peacemaking in its region, notably in Syria and Yemen, and easing tensions with regional rival Saudi Arabia.

Rouhani said the protracted, complex — but ultimately successful — nuclear negotiations could serve as an example for solving multiple crises in the Middle East.

Rouhani, in a speech to French think tank IFRI, said that for such diplomacy to work, both sides must "lower our pretensions."

Speaking through a translator, he said "that allowed us to reach accords" on curbing Iran's nuclear program and lifting sanctions. "Each side must feel it is a win-win agreement."

France, which has deep ties with Arab countries and has sought to improve ties with Israel, is conducting a balancing act in the region. Last week, Foreigh Minister Laurent Fabius visited Sunni-majority Saudi Arabia, Iran's fierce rival, and Paris will shortly welcome the Saudi crown prince.

Rouhani also met Pope Francis on the first such Iranian foray into Europe since 1999. Rouhani was originally scheduled to visit Paris in November, but the trip was called off after Nov. 13 Islamic extremist attacks that killed 130 people.