FLINT, Mich. (AP) — The longest line at Freeman Elementary School's Family Fun Night was not for face painting or food. It was for lead testing. For three months, families in the former auto manufacturing hub of Flint have taken their children for blood tests and lived on bottled water after... 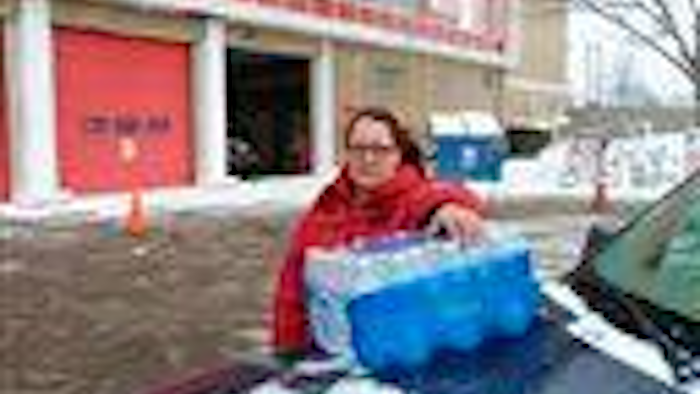 FLINT, Mich. (AP) — The longest line at Freeman Elementary School's Family Fun Night was not for face painting or food. It was for lead testing.

For three months, families in the former auto manufacturing hub of Flint have taken their children for blood tests and lived on bottled water after doctors found high levels of lead in the bodies of the community's youngest people.

"It really is a scary situation to know that we can't get clean drinking water," said Sherri Miller, who brought her first-grade son, Jameer, to have a finger-prick blood sample tested. "It really is scary to think someone knew about this" and did nothing.

Nearly two years have passed since safe drinking water flowed from Flint faucets. The financially troubled city began drawing its water from the Flint River in 2014 to save money. Officials failed to treat the corrosive water properly to prevent metal leaching from old pipes. Worse, residents didn't learn they were drinking tainted water until the state issued warnings a year and a half after the switch was made.

Before the crisis, Flint, about an hour's drive north of Detroit, had become a symbol of the decline of the U.S. auto industry, having suffered waves of auto plant layoffs and the loss of half its population. Forty-one percent of the population falls below the poverty line.

These days, it's a place where parents fear for the health of young children, who can develop learning disabilities and behavior problems from lead exposure.

"It has such damning, lifelong and generational consequences," said Dr. Mona Hanna-Attisha, director of pediatric residency at Hurley Children's Hospital, where more than 2,000 children have been tested. She is credited with bringing the problem to the public's attention after state agencies initially dismissed her concerns.

"It was frustrating that it went on for so long," Hanna-Attisha said, complaining that even since the state began taking action, "everything has been slow."

Gov. Rick Snyder finally acknowledged in late September that the water was unsafe, saying the consequences of switching to Flint River water were not "fully understood." The decision to use the river was made while a Snyder-appointed emergency manager was running city government.

The city, which had been under state supervision since 2011, returned to local control last April.

Flint went back to Detroit water in October, but some fear the old pipes were so damaged that they must be replaced, at costs estimated as high as $1.5 billion.

On Monday, Snyder apologized to Flint and pledged that officials would contact every household to ensure families have bottled water and a filter and to check whether they want to be tested for lead exposure.

He also promised to seek a long-term solution.

"This is a crisis," the governor said. "So we're responding appropriately. There's more work to be done."

Snyder's many critics got louder at midweek, when the governor announced that two spikes in Legionnaires' disease had occurred in the county that includes Flint during the time Flint River water was used. Ten people died. Michigan health officials said they cannot conclude that the outbreak stemmed from Flint's water, but others argued it probably had.

Then late Thursday, Snyder asked President Barack Obama to issue a federal disaster declaration in an effort to get federal aid. Critics countered that the step should have been taken sooner.

After Snyder declared a state of emergency Jan. 5, residents could go to fire stations to pick up a daily ration of one case of bottled water per household and a water filter. But even that effort fell short.

The following Monday, a pile of empty filter boxes was stacked against the wall at one station. One woman came back three times in the hope of getting one. Hours later, even the water was gone after volunteers had given out almost 900 cases. And the fire station had not received any of the lead test kits that had been promised.

For angry residents, it's still not enough.

"The state was telling everybody, 'It's fine, relax. ... It's safe,'" even as people complained that the water looked cloudy and tasted bad, said community activist Melissa Mays. "They lied."

Mays, her husband and three sons ages 11, 12 and 17 are taking medication to reduce high lead and other heavy metal levels in their blood.

"Like everybody else, we drank and cooked with it because they told us it was safe," she said.

Rabecka Cordell said she learned from her doctor that both she and her 5-year-old son, Dayne, have lead poisoning. She said she also has leukemia, and her son has learning and speech disabilities.

She won't even bathe in the water and won't wash her son in it.

At the elementary school's lead testing on Tuesday, more than 50 kids lined up. One was fifth-grader Maleah Gill.

"You wonder how long has it been in her system?" said her father, Matt Gill. "How much has she taken in? What's the effects?

Hurley Children's Hospital is distributing 10,000 booklets on mitigating the effects of lead on children, including recipes high in iron, calcium and vitamin C. Adding to the challenge is that there are few grocers with fresh produce within Flint city limits. At a local farmers market, the hospital offers weekly recipe and cooking demonstrations with lead in mind. The first one was hearty egg burritos.

She urged parents to consult early and often with a pediatrician.

In consultations, the doctor said, "we need to give families hope that with secondary prevention interventions, not every kid is going to have problems."