All 17 miners trapped in New York salt mine are rescued

LANSING, N.Y. (AP) — Seventeen miners trapped in one of the world's deepest salt mines were rescued Thursday morning, ending a 10-hour ordeal that began when their elevator broke down 900 feet underground. The workers were descending to the floor of the 2,300-foot-deep Cayuga Salt Mine — nearly... 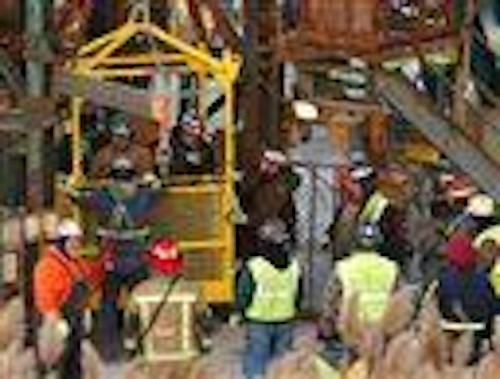 LANSING, N.Y. (AP) — Seventeen miners trapped in one of the world's deepest salt mines were rescued Thursday morning, ending a 10-hour ordeal that began when their elevator broke down 900 feet underground.

The workers were descending to the floor of the 2,300-foot-deep Cayuga Salt Mine — nearly deep enough to fit two Empire State Buildings stacked on top of each other — to start their shift when the elevator broke down at around 10 p.m. Wednesday, said Mark Klein, a spokesman for mine owner Cargill Inc.

The miners were never in any danger, Klein said.

Emergency workers communicated via radio with the miners, who had blankets, heat packs and other supplies lowered to them.

A crane hoisted the first four to the surface in a basket around 7 a.m. Thursday at the mine in Lansing, about 40 miles outside Syracuse. Another four were rescued about 30 minutes later, and seven more were brought to the surface by 8:30 a.m., Klein said. The last two were rescued a few minutes afterward, he said.

The mine, which Klein said is the deepest salt mine in the Western Hemisphere, produces road salt that is shipped throughout the Northeastern United States. The mine is located on the shore of Cayuga Lake and extends beneath its waters.

Mining at the Lansing site began 100 years ago. Minneapolis-based Cargill bought the mine in 1970, and it now employs 200 workers at the operation, Klein said.

"While we hope to never make use of that practice, it's helping us today," he said.

Mining operations will be shut down for the rest of the week as company officials and federal government mine safety inspectors investigate what caused the elevator, one of several at the site, to malfunction, Klein said.

"We want to take a step back, check things out," he said.

Klein said the last serious accident at the mine occurred on the surface in March 2010, when a 150-ton salt bin collapsed, killing a contract truck driver and injuring another man. The U.S. Mine Safety and Health Administration later determined a piece of the bin corroded and caused it to give way.