Environmental authorities in Beijing say air quality improved in 2015, a year in which they issued the city's first two red smog alerts. 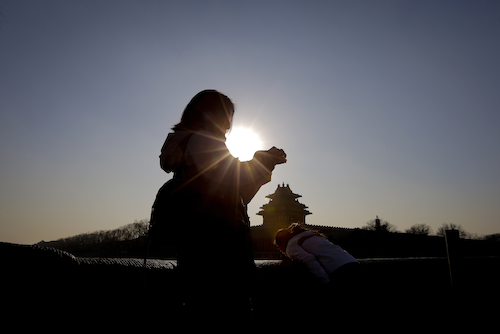 A woman is silhouetted against the sun as she walks past the Turret of the Forbidden City during a blue sky day in Beijing, Tuesday, Jan. 5, 2016. (AP Photo/Andy Wong)

Environmental authorities in Beijing say air quality improved in 2015, a year in which they issued the city's first two red smog alerts and showed a greater willingness to disrupt industry and ordinary people in search of cleaner air.

China has been setting national and local targets to reduce its notorious air pollution as citizens have become increasingly aware of the health dangers. Beijing's municipal government has been replacing coal-fired boilers with natural gas-powered facilities, forcing older, more polluting vehicles off the road, and closing or moving factories that are heavy polluters.

The city's average concentration of PM2.5 — small, inhalable particles that can penetrate deep into the lungs and are considered a reliable gauge of air quality — was 81 micrograms per cubic meter in 2015. That was a drop of 6 percent from 2014, and 10 percent lower than 2013, when Beijing started publishing data on PM2.5.

The "number of days of most serious PM2.5 pollution is falling each year," the capital's municipal environmental protection bureau said Monday.

It was, however, still more than twice China's own standard of 35 micrograms per cubic meter, and seven times higher than an annual mean of 10 that the World Health Organization gives as its guideline for safe air.

Other pollutants also fell, including sulfur dioxide by 38 percent and nitrogen dioxide by 12 percent. The environmental protection bureau attributed the lowering of sulfur dioxide to the phasing out of coal-fired heating systems.

Beijing's air gets especially bad in the winter, when the burning of coal for heat in northern China increases and weather patterns add to the smog. Almost half of the worst air days were in the final two months, according to the environmental bureau.

Beijing issued its first two red alerts in December under a two-year-old system. It meant half the city's vehicles were ordered off the roads on a given day, factory production was restricted and schools were closed.

In March last year, it lowered the threshold required to trigger a red alert from a forecast of 72 hours of continuous "severe pollution" — a Chinese air quality index reading of more than 300 — to "heavy pollution" or a reading of 200. "The earlier the launch, the greater the emissions reductions," the city government said at the time.

The two red alerts came about because of this lowered threshold and a greater willingness by authorities to issue one, said Ma Jun, of the non-governmental Institute of Public and Environmental Affairs in Beijing.

"I think before there had been some reluctance to do it because it's highly challenging to organize this and it will have a high social and economic cost," said Ma. "There has been a changing mindset on this."