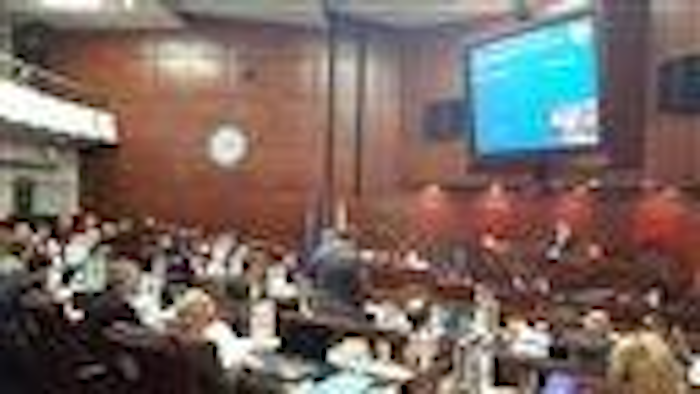 Gov. Brian Sandoval initiated the session, which is considered special because the Legislature typically only meets for four months every other spring. The incentive package is the only item up for discussion, in spite of lobbying to add more items to the agenda, and the session is expected to wrap up on Thursday or Friday.

"The new Nevada economy requires growing and attracting businesses that bring innovative and new technologies," the Republican governor said in the decree, adding that "an extraordinary occasion exists that requires immediate action by the Nevada State Legislature."

Wednesday evening was reserved for formalities and introductions of bills, with the real debate expected to get underway on Thursday. Sandoval wants lawmakers to approve a new category of tax abatements that would authorize $215 million in tax incentives for the Chinese-backed automaker, which hopes to break ground on a 3 million-square-foot facility in North Las Vegas in January.

Assembly Democratic Leader Irene Bustamante Adams said Wednesday that without seeing the fine points of the bills, it was too soon to tell whether the deal would sail through the Legislature, as an incentive package to attract Tesla Motors' battery factory did in a special session last year.

"What we are excited about is the fact that it's an opportunity to diversify Nevada's economy," she said. "Not only from a national scale, but now putting Nevada as a global competitor."

The Gardena, California-based company has offered few details about its product, but plans to unveil a concept car ahead of the Consumer Electronics Show in Las Vegas in January. It hopes to bring a vehicle to market as early as 2017, and plans to employ 4,500 people at its plant.

The venture is backed by Jia Yueting, an online video and gadget entrepreneur and founder and CEO of Beijing-based holding company LeTV. He styles himself after Apple's late Steve Jobs.

Republican Assemblywoman Robin Titus, who consistently voted against tax incentives during the legislative session this spring, said she was keeping an open mind about the deal but hasn't been convinced it's good for the state.

"I think it's an insult to all the Nevada companies who've been here forever without having any incentives," Titus said. "We know the people who are paying the bills, paying for the rooftops, paying for the schools are all the small businesses."

Sandoval has said he's confident about the agreement, which is projected to bring state and local governments $760 million in tax revenue — three times the amount of tax abatements and credits the state plans to offer the company.