The Memphis City Council has proposed a law that could make it harder to construct an underground oil pipeline. 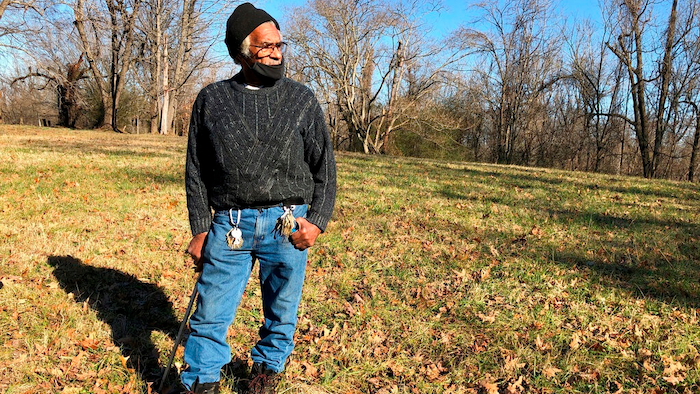 In this Jan. 28, 2021, file photo, Clyde Robinson, 80, speaks with a reporter while standing on his acre-sized parcel of land, in Memphis, Tenn. Robinson is fighting an effort by two companies seeking a piece of his land to build part of an oil pipeline that would run through the Memphis area into north Mississippi. City council members in Memphis, Tenn., are considering a law that could make it more difficult for a company to build an oil pipeline over an aquifer that provides clean drinking water to 1 million people.
AP Photo/Adrian Sainz, File

MEMPHIS, Tenn. (AP) — A company facing resistance to its plans to build an oil pipeline over an aquifer that provides drinking water to 1 million people has asked for a "mutual pause” in its dispute with city officials in Memphis, Tennessee.

Plains All American Pipeline sent a letter to the Memphis City Council about a proposed city law that could make it harder to construct an underground oil pipeline through wetlands and neighborhoods in south Memphis and north Mississippi. Plains is part of a joint venture with Valero Energy to build the Byhalia Connection, which would link the Valero refinery in Memphis with another larger pipeline in north Mississippi.

The council’s ordinance would establish a board to approve or deny construction of underground pipelines that transport oil or other potentially hazardous liquids near wells that pump millions of gallons of water daily from the Memphis Sand Aquifer. The ordinance is backed by pipeline opponents who fear an oil spill would endanger the aquifer.

The council made no mention of the Plains letter during a vote Tuesday to delay a vote on the ordinance for two weeks. Councilors said they decided to postpone a decision so they could address questions they themselves had and allow input from the mayor’s office and the local water company.

In the letter, Plains said Byhalia Connection is willing to suspend development activities and address city council and community concerns “if the City is willing to suspend consideration, adoption, or final reading of the existing or any new ordinance that could affect the pipeline or refinery.”

“We very much appreciate your willingness to talk with us and receive our feedback and work to resolve any differences,” the letter said. “It’s in this light that we would like to propose a ‘mutual pause.’”

Byhalia has threatened to sue if the ordinance passes. In a statement, project spokeswoman Katie Martin called the proposed law “an example of ill-conceived local government overreach that is preempted by state and federal law.”

The ordinance would be just the latest in a series of measures opponents have taken to block the Byhalia Connection pipeline, including a federal lawsuit. They have obtained the support of members of Congress and other well-known figures, including former Vice President Al Gore and actor Jane Fonda.

Plains and Valero want to build the 49-mile (78-kilometer) artery to carry crude oil to the Gulf Coast, a project that they say will bring needed jobs and tax revenue to the region.

Environmentalists, lawyers, activists and politicians who oppose the pipeline are concerned that an oil spill would cause contaminants to seep into the aquifer, which provides slightly sweet drinking water to the Memphis area. In a letter to the U.S. Army Corps of Engineers, the Southern Environmental Law Center said the clay layer above the aquifer “has several known and suspected breaches, holes, and leaks.”

Activists also are upset that the pipeline would run through poor, predominantly Black neighborhoods in south Memphis that for decades have dealt with environmental concerns such as air and ground pollution.

The ordinance would require underground pipeline builders to provide documentation about any potential adverse effects on the environment and groundwater, and an analysis of the potential for negative effects on minorities, low-income residents, and neighborhoods historically burdened by environmental pollution.

Byhalia Connection has said the pipeline would be built a safe distance from the aquifer, which sits much deeper than the planned pipeline route. The company said the route was chosen after it reviewed population density, environmental features and historic cultural sites.

Byhalia Connection also has said the pipeline route was not driven by factors such as race or class. The company has denied accusations of environmental racism that emerged after a Byhalia Connection land agent said during a community meeting that the developers “took, basically, a point of least resistance” in choosing the pipeline’s path.

“We know environmental racism is real and we’ve listened to this community, but the reason this pipeline runs through South Memphis is to connect to the Valero Refinery,” the company said in a March project update.

Most property owners along the path of the pipeline signed deals with Byhalia Connection to allow the pipeline builder to access their land for construction. Property owners who haven’t agreed to receive payment in return for easements on their land have been taken to court, with the pipeline company’s lawyers trying to use eminent domain rights to claim property.

A federal lawsuit is challenging the Army Corps of Engineers’ approval of the pipeline under a nationwide permit, and the Shelby County Commission has refused to sell to the pipeline builder two parcels of land that sit on the planned route.

U.S. Rep. Steve Cohen, a Memphis Democrat, and about two dozen other members of Congress have sent a letter asking the administration of President Joe Biden to reconsider the permit approval.