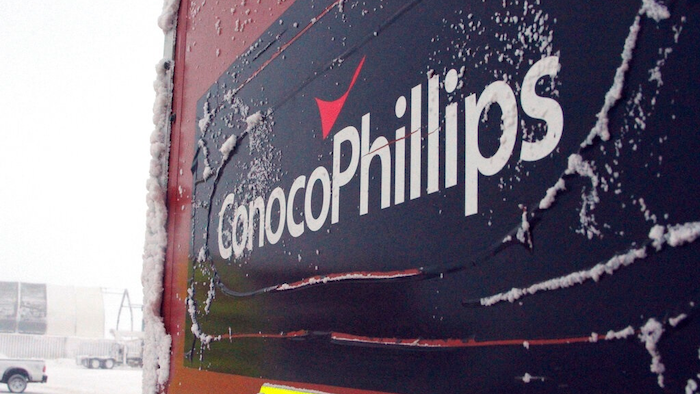 This Feb. 9, 2016, file photo shows an ice-covered ConocoPhillips sign at a drilling site in Nuiqsut, Alaska. ConocoPhillips is buying shale producer Concho Resources in an all-stock deal valued at $9.7 billion. The companies said Monday, Oct. 19, 2020, that the combined business will be the largest independent oil and gas company, with pro forma production of more than 1.5 million barrels of oil equivalent per day.
AP Photo/Mark Thiessen, File

NEW YORK (AP) — ConocoPhillips is buying shale producer Concho Resources in an all-stock deal valued at $9.7 billion, making it a major presence in the Permian Basin, the top-producing oil field in the U.S.

The deal comes as many oil producers are struggling to make ends meet. Oil prices have remained low for months, mainly because efforts to contain the coronavirus halted most travel, obliterating demand for fuel. The price for a barrel of crude is down more than 30% since the start of the year, and it has been hovering around $40 a barrel, below what most producers in the U.S. need to break even.

In this year's third quarter, 17 oil and gas producers filed for bankruptcy protection, which was a 21% increase compared to last year according to law firm Haynes and Boone.

“When we add it all up, we see an industry that will remain challenged and smaller producers are recognizing this, accepting smaller or no premiums for their companies than they had received in the past,” said PeterMcNally, global sector lead for industrials, materials and energy at Third Bridge Group.

The combination, which is expected to close in the first quarter of next year, could help the companies achieve $500 million in annual cost and capital savings by 2022. Half of that would be realized through reduced exploration costs, thanks to the additional barrels from the Concho purchase, ConocoPhillips spokesman John Roper said in an email. Another $100 million in reductions would come from duplicate general administrative costs and board positions, officers and corporate costs.

About $150 million will come from streamlining corporate and regional organization structure to increase efficiency. “It’s very early on, but we do expect to find duplicative positions that will result in job losses from both companies,” Roper said.

Many shale producers were struggling before the pandemic struck, racking up huge, unsustainable debts to find oil and gas using unconventional, costly techniques. Those massive debts are now coming due, and it's catching up with the companies that were most aggressive. More than 200 oil producers have filed for bankruptcy protection in the past five years.

ConocoPhillips was more conservative about growth, and was sometimes perceived as slow, said Raoul LeBlanc, vice president of North American unconventionals at IHS Markit. “Because of their discipline, they’re now in a position of strength to go ahead and buy people who were fast growers,” such as Concho, LeBlanc said.

There were a flurry of deals in the third quarter, which could be the start of a long-overdue consolidation phase, said Stewart Glickman, energy equity analyst at CFRA. A tie-up with ConocoPhillips was expected after rumors of talks began to surface, but analysts at CFRA were surprised that Concho's board agreed to the acquisition, Glickman said.

Concho ”has the advantage of a large acreage position in the Permian Basin and has more time than most peers before significant long-term debt milestone payments arrive," he said.

ConocoPhillips had acreage in the Permian Basin, but it was small compared to the company's size, and the deal "gets them a premier position in the Permian,” LeBlanc said.

“Concho is a tremendous fit with ConocoPhillips,” said CEO and Chairman Ryan Lance in a prepared statement.

The companies, both based in Texas, will combine their acreage across the Delaware and Midland basins — both part of the Permian — and also includes positions in the Eagle Ford and Bakken basins and the Montney in Canada. The Permian basin stretches from the northern reaches of Texas across the New Mexico border.

“Through this combination, we are joining a diversified energy company with even more scale and resources to create shareholder value in today’s markets and beyond,” said Tim Leach, chairman and CEO of Concho Resources, in a prepared statement.

Concho's common stock will be exchanged for 1.46 shares of ConocoPhillips. Shares of both companies rose slightly Monday.