The revelation of just how unprepared the utility was comes as PG&E tries to repair damage done by a decade of criminal recklessness that culminated in wildfires. 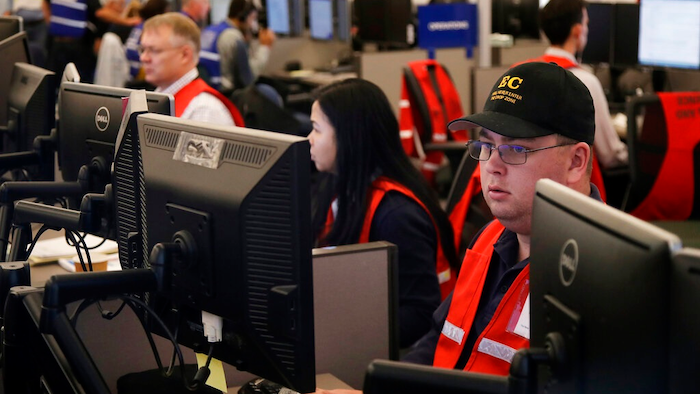 SAN FRANCISCO (AP) — When Pacific Gas & Electric cut power to large swaths of wildfire-prone Northern California last fall, few of the emergency personnel managing the blackouts for the nation’s largest utility had learned the fundamentals of managing an emergency in their home state.

The utility entered 2019 planning to “de-energize” its aging electric grid during autumn windstorms, so that downed lines couldn’t spark a blaze. Yet among the hundreds of people who handled the blackouts from PG&E’s emergency operations center, only a handful had any training in the disaster response playbook that California has used for a generation, The Associated Press found.

Fast forward to this fall. PG&E’s catchphrase for the blackouts is “smaller, shorter, smarter.” By many accounts, the three power shutoffs so far have indeed been smoother.

That improvement reflects more than just infrastructure upgrades and a year to fine tune. Chastened by its failures and required by state regulators, PG&E sought the training it had neglected.

As its name suggests, the Standardized Emergency Management System helps institutions as different as a massive utility and a rural county enter a public disaster with a built-in plan. The blueprint covers a range of issues, including how to share information and how to structure emergency operation centers. It also creates a common vocabulary -- an important tool given the collision of jargon and acronyms when jurisdictions converge.

Responding to a disaster requires improvisation, much like a jazz band performance, said Chris Godley, director of emergency management in fire-besieged Sonoma County. An untrained PG&E last year was like having a stranger come to the show with their instrument, “walk onto the stage and just jump into the middle of the song.”

That might work if the new player has skills. When it came to emergency management, PG&E did not.

Others likened the dynamic to a team that shows up without knowing the rules of the game, or an aircraft pilot who doesn’t communicate with air traffic control.

The revelation of just how unprepared the utility was comes as PG&E tries to repair damage done by a decade of criminal recklessness and cover-ups that culminated in wildfires which killed more than 140 people and destroyed nearly 28,000 homes and other buildings. PG&E spent 17 months in bankruptcy court hashing out $25.5 billion in settlements to pay for the devastation it wreaked.

Hoping to avoid even more calamity, PG&E embraced training, turning to state experts for online sessions that introduce the Standardized Emergency Management System. During 2020, about 90% of the 676 workers in its emergency centers have completed the required initial training, the utility told AP in a statement.

“We’ve already seen the value of this transition,” according to the statement, “and expect to continue evolving our maturity as we move through the remaining phases of training.”

The Standardized Emergency Management System grew from a catastrophic 1991 fire that raged through the Oakland hills, across the bay from PG&E’s San Francisco headquarters.

Paralyzed by inadequate planning, first responders from dozens of jurisdictions fought confusion, broken or overloaded communication channels, and bottlenecks on narrow streets as they tried to tame the flames. More than 3,000 homes burned and 25 people were killed.

Breakdowns in the response were for California what 9/11 would be a decade later for emergency communications systems -- a catalyst event to organize before disaster strikes.

Yet instead of learning California’s long-established language and customs, when PG&E started contemplating in 2018 how to handle intentional blackouts it developed its own emergency management curriculum, one tailored to the utility industry.

“Everyone has been trained in it, so there is no confusion when we pull the trigger,” Ghio said.

Yet in an answer PG&E gave in January as part of legal discovery amid a state investigation into the 2019 blackouts, the utility described its standards like this: “While PG&E typically staffs certain EOC (emergency operations center) roles with individuals having prior emergency management experience, there are currently no positions within the EOC organization structure that require prior emergency management experience, qualifications, or certification.”

In its statement to AP, the utility said “several” emergency management specialists and leaders had -- on their own -- studied the Standardized Emergency Management System prior to this year. Asked for a specific number, PG&E did not answer.

PG&E’s ignorance of basic protocols was “hugely significant” last year, according to a top official at the state agency that regulates utilities and is conducting the investigation.

“Everybody was basically acting as co-pilots to them because they couldn’t manage it,” said Rachel Peterson, acting executive director of the California Public Utilities Commission. “The lawyers were playing a big role, which is not what you want in an emergency.”

While the commission’s investigation may stretch into next year, according to recently filed documents, state officials immediately concluded that PG&E needed to ensure all its emergency personnel were trained.

The fact that they were not was “a staggering failure of common sense,” said Megan Somogyi, an attorney representing a coalition of local governments which have pressed state regulators to hold PG&E accountable.

Somogyi likened the complexity of managing intentional outages to launching an astronaut. In this case, without consulting experts who have done it many times before.

“You’re not going to use any of NASA’s research, or their launch pad,” she said. “You are going to build a rocket in your backyard and try to send somebody to space.”