The Duterte administration has been in talks with China in recent years on possible joint exploration involving Philippine and Chinese energy companies. 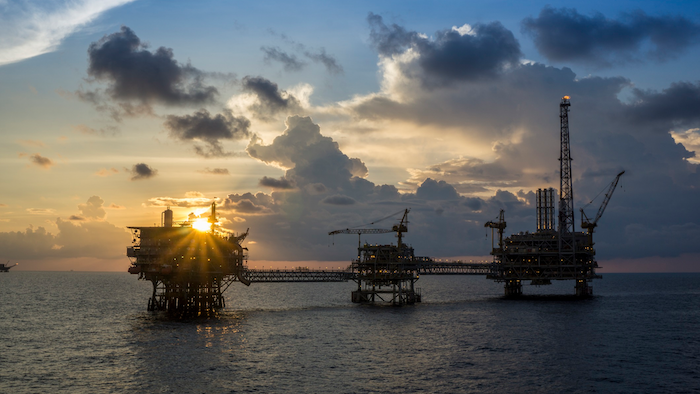 A silhouette of oil and gas production platforms in the South China Sea.
iStock

MANILA, Philippines (AP) — The Philippine president has approved the lifting of a ban on oil and gas exploration in or near disputed areas of the South China Sea that was imposed six years ago because of escalating territorial tensions with China, an official said Thursday.

Energy Secretary Alfonso Cusi said companies awarded contracts to explore for oil and gas in three sprawling areas off the western Philippines have been asked to resume their search operations, including in a potentially oil- and gas-rich region called Reed Bank.

Chinese ships tried to shoo away a Filipino exploration vessel in Reed Bank at least once in the past, and it was not immediately clear if China was aware of the Philippine decision. President Rodrigo Duterte has nurtured closer ties with Beijing since taking office in 2016 and put the territorial rift on the backburner in his initial years in power to avoid offending China.

“We need to explore so we may address the country’s energy security,” Cusi said in a statement. He thanked Duterte for approving the energy department’s recommendation to lift the yearslong moratorium on energy exploration.

An offshore gas field called Malampaya, which is closer to the western Philippine province of Palawan and supplies about 40% of the power needs of the country’s northern Luzon region, may be depleted of its reserves in the near future, worrying Philippine officials.

“With the impending depletion of our natural gas reserve in Malampaya ... there is an urgent imperative to resume exploration, development, and production activities within our exclusive economic zone to ensure continuity of supply of indigenous resources in the country,” Cusi said.

The Philippine decision to lift the ban places the exploration companies “under legal obligation to put capital into the contract areas and hire Filipino engineers and technical workers to resume exploration,” Cusi said.

That, along with foreign investment in the exploration, will help boost an economy that has been battered by the coronavirus pandemic, he said.

The Duterte administration has been in talks with China in recent years on possible joint exploration involving Philippine and Chinese energy companies, including in Reed Bank. But no agreement has been reached, largely because of the territorial issues, according to Philippine officials.

The Philippine lifting of the ban “was arrived at in good faith and with full regard of the ongoing negotiations between the Philippines and China,” along with Philippine and Chinese energy companies, Cusi said, without elaborating.

Former Philippine President Benigno Aquino III’s administration halted oil and gas exploration in or near the disputed waters around 2014, a year after it brought escalating disputes with Beijing in the South China Sea to international arbitration.

The Philippines largely won that arbitration case in 2016 with a U.N.-backed tribunal declaring China’s historic claims to virtually the entire South China Sea were invalid under the U.N. Convention on the Law of the Sea. The tribunal upheld the Philippines’ exclusive right to exploit marine and fuel resources in its exclusive economic zone, but China refused to participate in the arbitration and dismissed its outcome as a “sham.”

The Trump administration has repeatedly raised alarm over China’s increasingly aggressive actions in the disputed waters. Beijing has responded by warning Washington to stay out of what it says is a purely Asian dispute.

A statement didn't say when power would be restored.
Jan 11th, 2022
Follow Us
Most Recent