Lawmakers approved the agreement during a lame-duck session over objections that the measure was drafted sloppily. 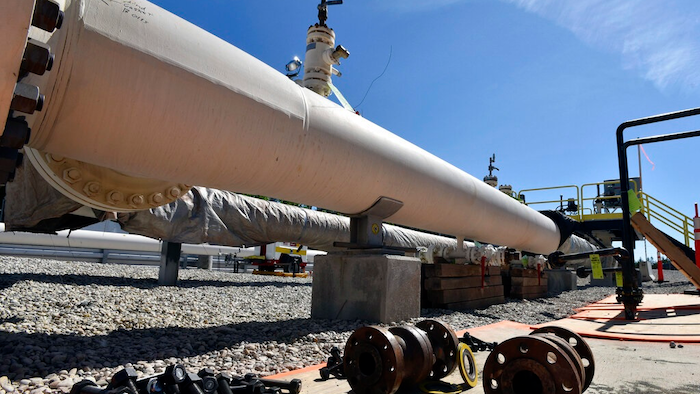 In this June 8, 2017, file photo, fresh nuts, bolts and fittings are ready to be added to the east leg of the Enbridge Line 5 pipeline near St. Ignace, Mich., as Enbridge prepares to test the east and west sides of the Line 5 pipeline under the Straits of Mackinac in Mackinaw City, Mich. The Michigan Court of Appeals ruled Thursday, June 11, 2020, that legislators did not violate the state constitution by allowing construction of an oil pipeline tunnel beneath a channel linking two of the Great Lakes.
Dale G. Young/Detroit News via AP, File

TRAVERSE CITY, Mich. (AP) — The Michigan Court of Appeals ruled Thursday that legislators did not violate the state constitution by allowing construction of an oil pipeline tunnel beneath a channel linking two of the Great Lakes, clearing the way for the project to proceed unless another court intervenes.

A three-judge panel affirmed a ruling last November by the Michigan Court of Claims, which upheld a law authorizing a deal between former Republican Gov. Rick Snyder and Canadian pipeline company Enbridge.

They had negotiated a plan to drill the tunnel through bedrock beneath the Straits of Mackinac, which connects Lakes Michigan and Huron and divides Michigan's upper and lower peninsulas.

It would house a pipeline that would replace a four-mile-long (six-kilometer-long) underwater segment of Enbridge's Line 5, which carries crude oil and natural gas liquids used in propane between Superior, Wisconsin, and Sarnia, Ontario.

Lawmakers approved the agreement during a lame-duck session in December 2018 over objections that the measure was drafted sloppily and rushed to enactment before Democrat Gretchen Whitmer, who criticized the deal, took over for Snyder the following month.

“The handout to Enbridge allowed the company to avoid the normal vetting process of a project of this magnitude — cutting out public comment and input,” said Beth Wallace, conservation partnerships manager for the National Wildlife Federation’s Great Lakes office.

Snyder and Republican legislators said the deal was struck after years of public discussion.

Attorney General Dana Nessel, also a Democrat, issued an opinion in March 2019 that the authorizing bill was unconstitutional because its provisions far exceeded what its title specified.

Enbridge requested a ruling from the Court of Claims, where Judge Michael Kelly found that lawmakers had adequately followed the constitutional requirement to express a bill's "general purpose or object” in its title.

“We conclude that the title ... does not address objects so diverse that they have no necessary connection,” they said in a written opinion Thursday.

The ruling was a victory for Enbridge, which says it plans to finish the tunnel by 2024.

“We look forward to working with the state to make a safe pipeline even safer,” spokesman Ryan Duffy said. “We are investing $500 million in the tunnel’s construction – thereby further protecting the waters of the Great Lakes and everyone who uses them.”

“While we are disappointed by the Court of Appeals' decision, we stand by our position that (the law) is unconstitutional,” she said.

The constitution's provision about titles is intended to prevent deception about what bills would do.

The disputed measure's title was lengthy, authorizing state boards to acquire and operate the planned tunnel and perform numerous other duties. Even so, Nessel argued that the bill went well beyond what the title indicated.

But the appeals judges found that “neither the legislators nor the public were deprived of fair notice" of the contents.

Nessel is pursuing a separate lawsuit that seeks to shut down Line 5 — long a goal of environmentalists who say a rupture could devastate waters and shorelines in a sensitive area home to endangered species and prized by tourists.

The 67-year-old underwater segment consists of two pipes that carry a combined 23 million gallons (87 million liters) daily. Enbridge says the lines are inspected regularly and are in good condition. But protective outer coating has worn away in some spots and erosion has required the installation of steel braces. A barge and tugboat anchor struck the pipes in 2018.

“This daily threat must end regardless if any oil tunnel is ever constructed,” said Sean McBrearty, campaign coordinator for the group Oil & Water Don’t Mix.