The company's pipeline carries oil and natural gas from Wisconsin to Ontario. 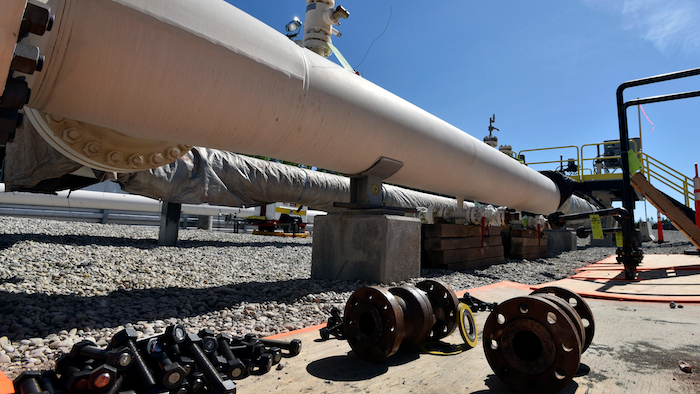 Fresh nuts, bolts and fittings are ready to be added to the east leg of the Enbridge Line 5 pipeline near St. Ignace, Mich.
Associated Press

TRAVERSE CITY, Mich. (AP) — Enbridge has produced legally acceptable plans for dealing with a potential spill from oil pipelines that cross a Michigan channel linking two of the Great Lakes, according to a federal appeals court.

A panel of the 6th U.S. Circuit Court of Appeals last week overruled a district judge who had agreed with an environmental group that the pipeline company's plans failed to adequately consider potential harm to fish and wildlife in the Straits of Mackinac.

Enbridge, a Canadian company based in Calgary, Alberta, developed the strategy as required under the Clean Water Act in case of failure of its Line 5. The pipeline carries oil and natural gas liquids used in propane from Superior, Wisconsin, to Sarnia, Ontario.

A four-mile (6.4 kilometer) segment divides into two pipes that lie across the bottom of the straits, which connect Lakes Huron and Michigan.

Enbridge says the 67-year-old segment has never leaked and remains in good condition. But the company plans to build a replacement in a tunnel that would be drilled through bedrock beneath the straits.

Michigan Gov. Gretchen Whitmer is a critic of Line 5, which state Attorney General Dana Nessel is seeking to shut down in a lawsuit pending in state court. They agree with environmental groups that the pipelines pose unacceptable danger.

Enbridge submitted two spill response plans in the past five years, both approved by the federal Pipeline and Hazardous Materials Safety Administration.

The National Wildlife Federation sued, contending the agency failed to make sure that approving the plans would not jeopardize fish or wildlife listed under the Endangered Species Act.

Nor did the agency prepare an environmental impact statement as required under the National Environmental Policy Act, the wildlife federation said.

District Judge Mark Goldsmith in Detroit ordered the pipeline administration to comply with both laws.

But in a 2-1 ruling last Friday, the federal appeals panel said the agency could not consider them because the Clean Water Act has specific criteria “by which to evaluate the ‘correctness’ of the plans."

The agency found that Enbridge had met those standards, Judges Amul Thapar and Joan Larsen wrote in their majority opinion. They primarily involve having enough personnel and equipment to respond to a worst-case discharge, as well as testing and drills.

In a dissent, Judge Gilbert Merritt said the majority had taken “an extremely narrow view" of the discretion that agencies have to consider additional laws protecting natural resources.

Mike Shriberg, Great Lakes regional director for the wildlife federation, said Enbridge's preparations might prove useless during a gale or when the straits are covered with ice.

“If you've got equipment in place that can't be used, you've got to look at what the impacts would be to fish or wildlife like the piping plover, which is an endangered species that has critical nesting habitat in that area," he said. “If the federal agency isn't considering those things, they're not doing their job.”

The group may ask the entire 6th Circuit court to take the case or appeal to the Supreme Court, Shriberg said.

Enbridge's plans are based on consultation with numerous experts and government agencies in the U.S. and Canada, including the Environmental Protection Agency, spokesman Ryan Duffy said.

“Enbridge has developed and implements very thoughtful and thorough emergency response plans to respond to any size of a release from Line 5, including any release at water crossings made by Line 5, such as at the Straits,” he said. “Our policies and procedures demand that Enbridge pipelines and associated facilities are operated safely.”