Houston Blast Prompts Safety Debate in City with No Zoning

Many residents have neighbors they don't want: petrochemical facilities and businesses that handle hazardous materials. 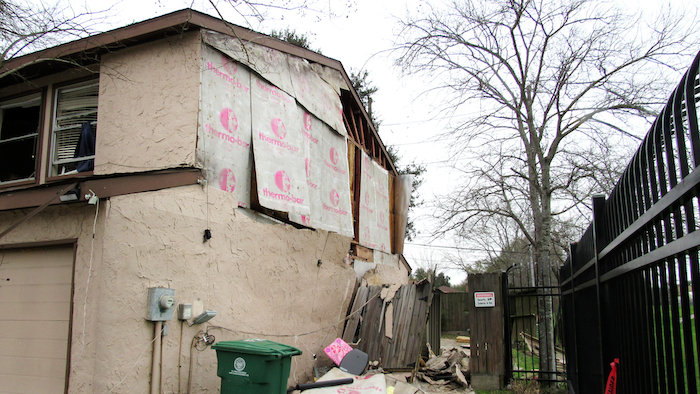 In this Thursday, Jan. 30, 2020, photo, a Houston home remains in disrepair after being damaged by the Jan. 24, 2020, explosion at a nearby industrial business.
Associated Press

That unease was laid bare again last month when a massive explosion leveled a metal fabricating and manufacturing business in the northwest of the city, killing two workers, damaging hundreds of nearby buildings and homes, and terrifying their occupants.

Quan Nguyen, a 49-year-old plumbing, heating and air conditioning technician whose house is a few hundred yards (meters) from Watson Grinding and Manufacturing, said the Jan. 24 blast knocked him out of bed and caused his wife to fall and hit her head while she was getting a drink of water. Some of their ceilings collapsed and the explosion shattered the windows in their sleeping son's bedroom, but thankfully none of them were seriously injured.

“I feel like it needs to be separated, businesses from residential areas. If they (have) businesses around here with chemicals, probably they have to be maintained more often, more inspections for them,” said Nguyen, voicing a growing sentiment in a city and region that has endured six major industrial accidents in the past year that have killed three people, injured dozens of others, and forced temporary evacuations and school closures.

While the accidents have stoked the debate over zoning, it's highly unlikely that the nation's fourth-largest city is going to embrace major development restrictions. Instead, city leaders have begun discussing other measures, including requiring such businesses to submit to more frequent inspections and to disclose more information about the types of hazardous materials they are handling.

“We just can’t have these incidents occur without us looking for ways to mitigate future risk,” Mayor Sylvester Turner said recently.

Even modest new local regulations could face pushback from higher up, though, in a state that aggressively bills itself as open for business.

It’s unclear why Houston never adopted zoning, making it the largest U.S. city without it. It's not for lack of trying, as there have been five attempts to do so in the self-proclaimed energy capital of the world since 1929, most recently in 1993, when voters declined to embrace zoning.

Lars Lerup, a retired Rice University architecture professor who studied Houston, suggested that the lack of zoning could have come about as a reflection of the state’s independent spirit, and the self-reliance and drive that many in the oil industry had. The lack of zoning has created a city with a “highly unique” urban environment, he said.

Although Houston has rejected zoning over the years, it does have various land use rules and other kinds of restrictions that amount to “quasi zoning,” said Matthew Festa, a professor who teaches property law and land use at South Texas College of Law Houston. For example, there are rules that regulate construction around the city’s airports, restrict where sexually oriented businesses can open, and set minimum lot sizes, which help restrict density.

Supporters of no zoning say it has helped boost Houston's development and economic growth. But others, including community groups and researchers, say neighborhoods that are poorer or home to more racial minorities are disproportionately negatively affected by the lack of zoning.

In the southeastern Houston neighborhood of Manchester, Guadalupe Ortiz has lived more 32 years across the street from a refinery. The 68-year-old widow who lives off her monthly Social Security check said her dream of moving is unaffordable.

“I want to sell. But people will continue living here. Where will they go? We are poor,” Ortiz said. As she sat in a park next to the refinery and where she walks daily, white smoke billowed from the sprawling facility, which emits a constant mechanical hum that Ortiz says keeps her up at night.

The explosion at Watson Grinding and Manufacturing seemed to be a tipping point for many.

“It just raises questions about how safe are we in our neighborhoods,” Houston City Council member Karla Cisneros said during a recent meeting of a committee that's discussing new regulations on businesses that handle hazardous materials.

It's unclear what, if any, substantial changes could be made, as attempts could be challenged in court or by state officials who have shown an aversion to regulations. When the Environmental Protection Agency in November scaled back chemical plant safety measures put in place after a 2013 fertilizer plant explosion in the town of West, Texas, killed 15 people, Texas Attorney General Ken Paxton praised the decision, saying it would “make Texans safer ... and restore some common sense to the regulatory process.”

Festa, the law professor, said he doesn't think adopting formal zoning regulations is the answer because Houston is “pretty well-built” and it would be economically and politically impossible to reconfigure neighborhoods.

Nguyen, whose home was damaged in last month's blast, said that although he wants more protections for people like him, he also wouldn't want to drive away industry or jobs.

Houston Fire Chief Samuel Peña, meanwhile, said he is hopeful that the city can come up with changes that will improve safety, adding it will take “being able to sit down and have a conversation as far as what do we want as a community in order to better protect our citizens."