In the state plagued by catastrophic blazes started by strong winds knocking down power lines, large investor-owned utilities have been aggressively shutting off power. 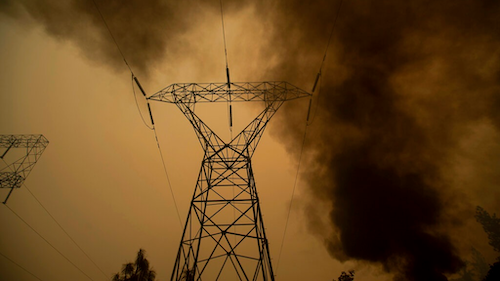 In this Nov. 9, 2018, file photo, smoke billows around power transmission lines as the Camp Fire burns in Big Bend, Calif. Pacific Gas & Electric Co., the nation's largest electric utility, filed for bankruptcy last year after facing an estimated $50 billion in damages from several Northern California wildfires that were linked to its equipment, including one blaze in 2018 that killed 85 people and destroyed about 19,000 buildings.
AP Photo/Noah Berger, File

SACRAMENTO, Calif. (AP) — Californians left in the dark by electric companies that shut off their power to prevent wildfires could get paid for things such as lost wages or spoiled food under a bill that advanced Thursday in the Legislature.

In the state plagued by catastrophic blazes started by strong winds knocking down power lines, large investor-owned utilities have been aggressively shutting off power for millions of customers ahead of windstorms.

Utility companies cite public safety for the practice but also do it to protect their bottom line. Pacific Gas & Electric Co., the nation's largest electric utility, filed for bankruptcy last year after facing an estimated $50 billion in damages from several Northern California wildfires that were linked to its equipment. including one blaze in 2018 that killed 85 people and destroyed 19,000 buildings.

PG&E shut off power for more than 2 million customers in October. The blackouts caused major disruptions throughout the region, closing schools and businesses and making it more difficult for people who rely on medical devices powered by electricity.

State Sen. Scott Wiener, a Democrat from San Francisco, says the liability issue acts as a financial incentive for electric companies to err on the side of large blackouts covering more people for longer periods of time. Wiener said he designed his bill to act as an incentive for utility companies to have smaller, more targeted blackouts.

The California Public Utilities Commission would oversee the fund and decide how big it should be. The measure would also let the commission fine power companies up to $250,000 an hour for every 50,000 customers impacted by a power shutoff if regulators determine the utility “failed to act in a reasonable and prudent manner.”

If the penalties had been in effect last fall, PG&E could have faced fines of more than $1 billion, according to a legislative analysis of the proposal.

“It's about giving utilities an incentive to use planned blackouts as a scalpel and not as a sledgehammer,” Wiener said.

Others worry the bill would spook electric companies into being too cautious with blackouts, thus increasing the risk of deadly wildfires.

“I believe it gives perverse incentives that could harm people,” said state Sen. Bill Dodd, a Democrat from Napa.

The bill passed the Senate Appropriations Committee on Thursday, clearing the way for a vote in the full Senate next week. The bill must pass the Senate by Jan. 31 to have a chance at becoming law this year.

In a letter to committee members on Wednesday, PG&E Chief of State Government Relations DaVina Flemings said the company proactively turns off power “for one reason only and that is keeping customers and communities safe.”

However, Flemings said the bill “would put customers and communities in a very dangerous position by penalizing the utilities for deploying a public safety power shutoff.”

Wiener said the bill would not ban planned blackouts, saying “they can save lives and property.” Instead, he said it is to “incentivize the right behavior.”

“Those costs are real,” Wiener said. “For a lot of people, if you lose your refrigerator contents, that's your food for the month.”