The reboot of the reactor will mark the revival of Japan's nuclear industry following the worst nuclear accident since Chernobyl in 1986. 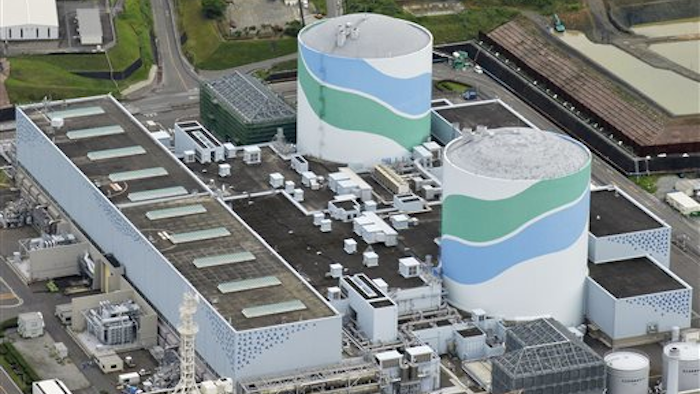 Kyushu Electric Power Co. officially announced Monday it will restart a nuclear reactor at its Sendai complex Tuesday morning, becoming the first Japanese utility to do so under a set of new, tighter safety regulations adopted following the Fukushima meltdowns in 2011.

With safety concerns remaining among the public, about 200 antinuclear residents and activists marched around the Sendai plant in Kagoshima Prefecture, located on the southwestern main island of Kyushu, and staged a sit-in to protest against its restart.

The reboot of the reactor will mark the revival of Japan's nuclear industry following the worst nuclear accident since Chernobyl in 1986. All the other commercial reactors in the country remain offline.

On Monday, Kyushu Electric finished all pre-operational checks, including inspections of control rods that have been suppressing the fuel's nuclear fission.

If the reactor goes back online as planned around 10:30 a.m. Tuesday, it is expected to reach criticality around 11 p.m. the same day and begin generating electricity on Friday, according to the utility.

"I would like Kyushu Electric to put priority on ensuring safety and be fully prepared for the restart," Prime Minister Shinzo Abe told reporters in Tokyo.

Abe reiterated that the government's basic policy is to reactivate nuclear reactors that have obtained safety clearance from the regulator based on "the world's toughest safety regulations."

Chief Cabinet Secretary Yoshihide Suga also told a press conference, "Restarting nuclear plants that have been confirmed safe is important in our energy policy" that views nuclear power as a key electricity source.

But Yukio Edano, secretary general of the main opposition Democratic Party of Japan, criticized the restart, saying, "It is clear that preparedness for evacuation is insufficient" in the event of a nuclear accident.

"I do not believe there is any necessity to rush to restart" the reactor at the Sendai plant, he told reporters.

According to the latest poll conducted over the weekend by public broadcaster NHK, only 17 percent of respondents said they supported the restart of idled nuclear reactors, 48 percent said they were opposed, while 28 percent said they could not say either way.

Naoto Kan, who was Japan's prime minister at the time of the March 2011 Fukushima disaster, joined the demonstration near the Sendai complex and told reporters, "I strongly felt that many of the residents (living near the plant) are against the resumption. Kyushu Electric should not reactivate the nuclear plant."

A 45-year-old woman from the city of Satsumasendai, home to the Sendai plant, also took part in the protest rally. "It's been only four years since the accident at the Fukushima plant exposed the risks of radioactive materials. It's too early for the restart," she said.

Critics have warned that evacuation plans drawn up by local municipalities in Kagoshima are far from adequate, while experts are calling for further debate on the risks of possible eruptions, with the Sendai plant located in an active volcanic region.

The Fukushima accident resulted in the shutting down of all of Japan's commercial reactors by the end of September 2013 due to safety concerns. All reactors now need to pass the Nuclear Regulation Authority's safety screening based on the more rigorous safety requirements introduced in 2013.

Kyushu Electric also plans to reactivate the Sendai No. 2 reactor in mid-October. The utility expects its business, hurt by increased imported fuel costs for thermal power, to improve drastically if the plant is reactivated, which could turn the company's earnings into the black for the first time in five years in the current business year through March.