Boeing is teaming up with Canadian aviation researchers to turn waste from the forestry industry into fuel that can help put planes in the sky. 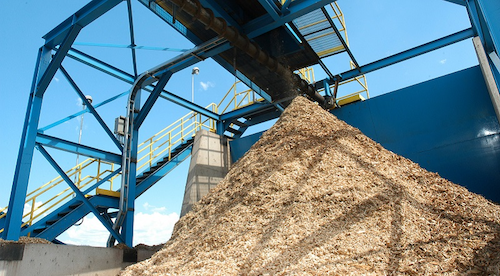 Forest debris could be used to make jet fuel in Canada. The country already uses the byproduct of its large forestry industry to generate electricity. Image credit: Boeing

Boeing is teaming up with Canadian aviation researchers to turn waste from the forestry industry into fuel that can help put planes in the sky.

Aviation biofuel made from forest waste – the residue of wood mills and the leftover branches, sawdust and waste from forestry – could meet 10 percent of British Columbia’s annual jet demand, according to a 2015 study sponsored by Boeing. A consortium led by the University of British Columbia and NORAM Engineering And Constructors, made up of Boeing, Air Canada, WestJet, Bombardier, Netherlands-based partner SkyNRG, and other research institutions and industry partners are studying whether this would be feasible, using thermochemical processing to make the transformation.

The United States Department of Energy said that using sustainably produced biofuel reduces lifecycle CO2 emissions by 50 to 80 percent as compared to petroleum.

Canada, which has a large forestry industry, is already using mill and forest residue to generate electricity.

"Air Canada believes that developing a reliable supply of sustainable aviation biofuel in Canada will play a role in achieving our emission reduction goals," said Teresa Ehman, director of environmental affairs at Air Canada. "By utilizing Canada's strong forestry research expertise and the knowledge of industry collaborators, this project will contribute significantly to understanding the viability of forest residue-sourced biofuel."

That 10 percent of annual jet demand translates to 46 million gallons of jet fuel. And if that project works, it could be expanded to include biofuel in ground and marine vehicles, potentially reducing CO2 emissions by 1 million tons per year across the transportation sector.

The project was announced at the Canadian Bioeconomy Conference, held from Nov. 30 to Dec. 2. It was also awarded funding by the Green Aviation Research and Development Network of Canada.

"WestJet has invested billions of dollars in fleet renewal to reduce our fuel consumption and to ensure we are doing our part towards responsible growth and environmental sustainability," said Geoff Tauvette, director of fuel and environment at WestJet. "WestJet's social responsibility mandate is to extend our culture of caring beyond our aircraft doors and we are proud to support initiatives such as these that reduce our carbon footprint through the research, development and production of aviation biofuels in Canada."