Where does a practical car like the Toyota Prius go to reinvent itself? The same place many people go to let loose and have fun: Las Vegas. 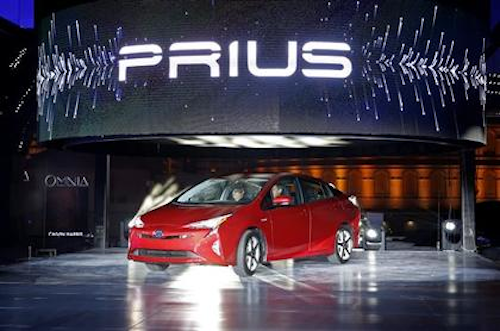 LAS VEGAS (AP) — Where does a practical car like the Toyota Prius go to reinvent itself? The same place many people go to let loose and have fun: Las Vegas.

Brightly-lit displays on a Las Vegas Strip rooftop-turned-nightclub reminded the gathered crowd of executives, car dealers and automotive journalists on Tuesday night that the Prius could be modern, sleek and edgy.

"We've got the whole package now," said Bill Fay, general manager of the Toyota Division in the United States. "People will want to buy this car for more than just the fuel efficiency."

The rollout of Toyota's new Prius comes at an inauspicious time for gas-sipping vehicles. Gas prices nationwide were at $2.39 per gallon Thursday, the lowest level since 2004, and analysts expect more declines now that summer driving season has ended. South Carolina prices are under $2 per gallon according to AAA, and four other states were at $2.10 or lower.

The Japanese automaker hasn't abandoned fuel-efficiency but at Tuesday night's event atop a rooftop at the Linq casino-hotel, the emphasis was squarely on fun complete with a hip band-of-the-moment as the car's opening act and Kobe beef sliders, crab legs and creme brûlée as an appetizer before the company hoisted a hyper sonic red Prius about 60 feet into the air for all to see.

"Now we have a car that's not just for mom and dad, tree-huggers and people on a budget," said David Rodgers, vice president of two Toyota dealerships in northern California. "This is what America's been waiting for: a hybrid car with edge," he said. Something the kids will want to drive, he said.

Details about its speed were not divulged.

U.S. Prius sales peaked at nearly 237,000 in 2012 with the introduction of wagon and compact models. Gasoline averaged $3.63 per gallon that year, the most expensive year on record. But since then, Prius sales have fallen to just over 207,000 last year. Through August sales are down 17 percent from a year earlier and Fay said he expects sales to fall below 200,000 by the year's end.