Federal scientists have determined that extremely low levels of crude oil spilled by the Exxon Valdez caused heart problems in embryonic fish, a conclusion that could shape how damage is assessed in other major spills. 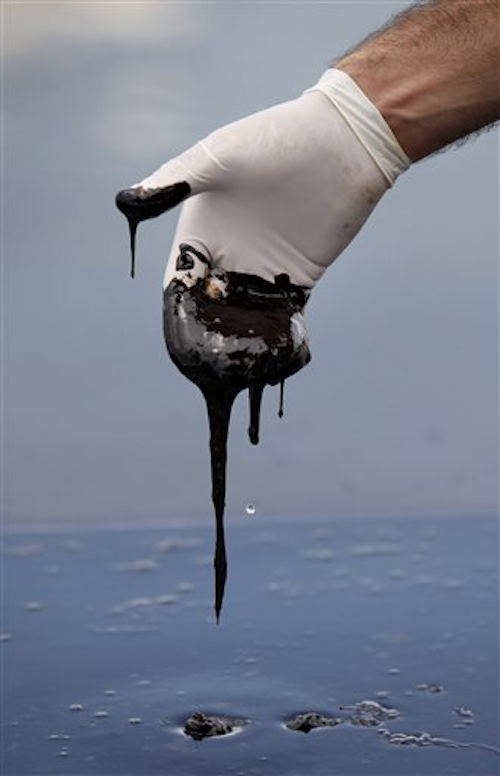 ANCHORAGE, Alaska (AP) — Federal scientists have determined that extremely low levels of crude oil spilled by the Exxon Valdez caused heart problems in embryonic fish, a conclusion that could shape how damage is assessed in other major spills.

In a study published Tuesday in the online journal Scientific Reports, researchers from the National Oceanic and Atmospheric Administration found that embryonic herring and salmon exposed to low levels of crude oil developed misshapen hearts.

"Metabolically, they're different," said John Incardona, a research toxicologist at the Northwest Fisheries Science Center in Seattle. "They can't grow as well. They can't swim as fast."

The defects and subsequent vulnerability may explain why the herring population crashed several years after the spill in Alaska's Prince William Sound and has not recovered, scientists said.

The 986-foot Exxon Valdez struck a charted Bligh Reef at 12:04 am March 24, 1989, spilling 11 million gallons of crude oil. At the time, it was the largest spill in U.S. history. Oil extensively fouled shoreline spawning habitat of herring and pink salmon, the two most important commercial fish species in Prince William Sound.

Fish larvae sampled close to high concentrations of oil were found with abnormalities. Little was known in the early 1990s, however, about effects of low-level crude oil exposure on fish in early life stages, according to the study.

Pink salmon declined but recovered. The herring population collapsed three to four years after the Exxon Valdez ran aground and the role of the spill, NOAA Fisheries scientists acknowledged, remains controversial.

The silvery fish is a key species because it is eaten by salmon, seabirds and marine mammals from otters to whales. Four years after the spill, the estimated herring population based on modeling shrunk from 120 metric tons to less than 30 metric tons.

For the study, the scientists temporarily exposed herring and salmon embryos to low levels of Alaska North Slope crude oil before placing them back into clean water. The threshold for harm in herring was remarkably low, Incardona said.

"Herring in particular, they are really, really very sensitive," in part because their eggs and yolk sacs are so much smaller.

After exposure, scientists transferred fish embryos to clean water, let them grow for seven to eight months and tested them in swim tunnels.

Scientists used swimming speed as a measure of cardiorespiratory fitness. Fish exposed to the highest levels of oil swam slowest, likely making them easier targets for predators. He compared the damaged herring to infant children born with heart defects.

"The child doesn't grow well. It's called 'failure to thrive,'" a condition that can be corrected by a heart surgeon.

"That doesn't happen with fish," he said.

According to water samples collected in Prince William Sound during the 1989 herring spawning season, 98 percent of the samples had oil concentrations above the level that caused heart development problems among herring in the study. Juvenile salmon with heart defects, swimming more slowly and not pumping blood as efficiently as an unharmed fish, would be more vulnerable to predators and disease. It's not much of a leap, he said, to conclude that more juvenile mortality would have an effect on how many herring survive to be spawning adults.

The findings should contribute to more accurate assessments of other spills, such as the Deepwater Horizon disaster, which replaced the Exxon Valdez spill as the largest in U.S. history.

"And not just other spills," Incardona said. "For us down here in Puget Sound, one of our big concerns is just urbanization, and the little, tiny oil spills that happen every day as non-point source pollution. Certainly for both — large spills and everyday chronic pollution from fossil fuel use — are potentially producing the same kinds of effects."