Volkswagen's pollution-control chicanery has not just been victimless tinkering, killing between five and 20 people in the United States annually in recent years, according to an Associated Press statistical and computer analysis. 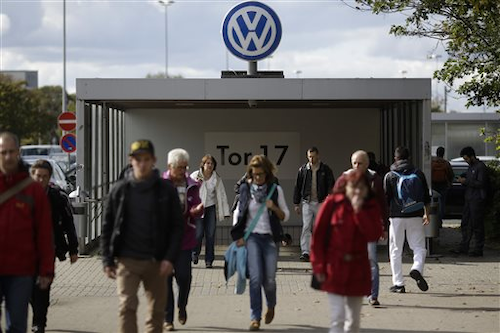 WASHINGTON (AP) — Volkswagen's pollution-control chicanery has not just been victimless tinkering, killing between five and 20 people in the United States annually in recent years, according to an Associated Press statistical and computer analysis.

The software that the company admitted using to get around government emissions limits allowed VWs to spew enough pollution to cause somewhere between 16 and 94 deaths over seven years, with the annual count increasing more recently as more of the diesels were on the road. The total cost has been well over $100 million.

That's just in the United States. It's likely far deadlier and costlier in Europe, where more VW diesels were sold, engineers said. Scientists and experts said the death toll in Europe could be as high as hundreds each year, though they caution that it is hard to take American health and air quality computer models and translate them to a more densely populated Europe.

"Statistically, we can't point out who died because of this policy, but some people have died or likely died as a result of this," said Carnegie Mellon environmental engineer professor Peter Adams. He calculates the cost of air pollution with a sophisticated computer model that he and the AP used in its analysis.

Nitrogen oxides mostly form smog — that murky, dirty air that makes it hard to see and for some people to breathe — but also amplify a deadlier, larger problem: tiny particles of soot. Numerous medical studies show those tiny particles cause about 50,000 deaths a year in the United States, mostly from heart problems.

Nitrogen oxides can travel hundreds of miles, so pollution spewed in Pittsburgh can be felt on the East Coast, Adams said.

Experts calculate how much pollution costs society by looking at the value of lost lives. In this case, Adams and other said the lost lives — valued at $8.6 million apiece — overwhelm other costs such as lost work days or hospital costs. The overall annual cost of the extra pollutants from the VW diesels ranged from $40 million to $170 million, environmental engineering professors calculated.

"Even the small increase in NOx from VW diesel emissions is likely to have worsened pollution along the roadways where they have traveled, and affected the lives of hundreds of thousands of people," said Dan Greenbaum, president of the Health Effects Institute in Boston.

"To say millions of people of people are breathing poor air as the result of that is not off the mark," said Greenbaum, who runs the institute that is funded by both the EPA and the auto industry to serve as an independent arbiter of the science.

In a response Saturday night to an earlier request for comment, Volkswagen said the EPA has noted that the affected vehicles do not present a safety hazard and are legal to drive. "General allegations regarding links between NOX emissions from these affected vehicles and specific health effects are unverified. We have received no confirmed reports that the emissions from such vehicles caused any actual health problem," the company said in a statement.

The calculations should be put in context of air that is getting dramatically cleaner in the United States, experts said. Also, the deaths from extra pollution are dwarfed by the 35,000 people in the U.S. a year who die in auto accidents and are closer to the annual U.S. death toll of spider or snake bites.

The AP calculated how much pollution was spewed year by year, starting with that broad 10 times to 40 times emissions level estimate from the EPA, then factoring in mileage and car number totals from EPA, the car company and Kelley Blue Book.

The results show an upper and lower limit of extra nitrogen oxides pollution allowed by VW's subterfuge. The AP took those figures to scientists who previously created a sophisticated computer program that looks at air movement and numerous epidemiological studies on the health effects of pollutants. The result was a rough estimate on deaths and costs to society based on a certain amount of pollution triggering each death.

The EPA has its own open source computer model that calculates death and social costs of emissions, roughly finding it takes nearly 1,300 tons of nitrogen oxides to cause one death. Using that calculation and AP's emission totals, the total death figures over the past seven years range from 12 to 69, slightly lower than the AP calculations.

The AP ran its calculations and results by more than a dozen experts in emissions, risk and public health. They all confirmed the calculations and results seemed right. One scientist had even done a statistical analysis on his own and came independently to the same conclusion. The experts were mostly university professors or from research institutes. They were not environmental advocates or representatives of auto companies.

But engineers caution that these figures come with many caveats and are ballpark estimates. They rely on many assumptions and a range of potential emissions per car. Air pollution impacts on people are usually calculated on a local level because that's where it is felt, and it changes from place to place. But these calculations were broadened to a national level, which adds more uncertainty.

The computer simulation that made the death calculations use conservative medical studies as their baseline. Other epidemiological studies would more than double the deaths and health costs, said Adams and model co-creator Jinhyok Heo of Cornell University.

Chris Frey, an engineering professor at North Carolina State University, has been testing the VW diesels in real world conditions, driving more than 100 miles with monitors in the car tailpipes. He found pollution 10 times higher than the federal standard, and noticed that the worst pollution came as he got on to highways and in stop-and-go traffic. Those less desirable areas are where poorer people live, Greenbaum and other experts said.

Since 2008, VW sold more than 10 million VW diesel cars in Europe, compared with less than half a million in the United States. In Europe, the population is more densely packed in urban areas, making them more vulnerable to added air pollution, several experts said.

"Assuming most of the cars are in Europe, it's pretty simple to estimate that it could go as high as hundreds," said Robert Rohde, a physicist and lead scientist at the Berkeley Earth team that has estimated death tolls of air pollution in the past.