The fireworks have fizzled. The festival lights are coming down. What's left of the Hindu holiday of Diwali in the Indian capital — already considered the world's most polluted — is a toxic haze that has residents gagging for oxygen and hiding indoors. 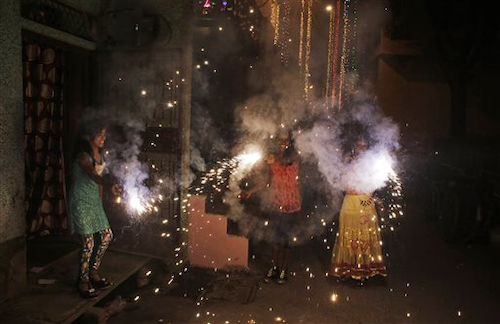 NEW DELHI (AP) — The fireworks have fizzled. The festival lights are coming down. What's left of the Hindu holiday of Diwali in the Indian capital — already considered the world's most polluted — is a toxic haze that has residents gagging for oxygen and hiding indoors.

Such pollution happens every year, as offices and businesses shut down for India's biggest gift-giving holiday and many gather outdoors to set off powerful rockets at all hours of the night.

"Diwali is a lovely festival of lights," Antonius said. "But the fireworks cause a little bit of pollution, which is adding to the pollution already in Delhi. And I don't think people should waste money on fireworks."

Restaurant worker Naresh Maggo, 29, said he still looked forward to bursting small fireworks with his children, but that the noise and air pollution made him think "we shouldn't overdo it."

"The intensity was no less, and the pollution level appeared to be quite high," said K. Srinath Reddy, president of the Public Health Foundation of India. He said Delhi dwellers, even if concerned about pollution, may still be motivated by a desire to show off to their neighbors.

The sale of fireworks is largely unregulated in India, and there are no reliable statistics to show how many were sold before the holiday.

The Center for Science and Environment, a Delhi-based research and advocacy group, said its exposure monitoring on Diwali night found pollution levels were slightly lower than in previous years, but still unacceptably high. Between 8 p.m. and midnight, PM2.5 levels at 399-608 micrograms per cubic meter in some places — well above the Indian limit of 60 and the WHO recommendation of 25. At some points, spikes in pollution were "frightening," hitting more than 2,500 micrograms per cubic meter.

"Delhiites will have to do a lot more to control crackers to reduce such dangerous levels of exposure and protect public health," the center's executive director, Anumita Roy Chowdhry, said in a statement.

Public alarm over rising pollution has seized the capital in recent few years, with newspapers carrying regular stories on levels of particulate matter called PM2.5 — small enough to penetrate deep into the lungs and cause disease. Another study in February estimated 660 million Indians, about half of the country's 1.25 billion population, were losing 3 years of their lives due to their exposure to air pollution.

Like its giant neighbor China, India is dependent on coal-fired power plants for electricity. It has seen explosion in the number of vehicles on the roads, while hundreds of millions of impoverished people still rely on burning wood, kerosene or whatever they can grab at the garbage dump to build fires for cooking or keeping warm on winter nights.

Indian officials have imposed a number of measures in hopes of clearing the air, including making emissions standards for cars and industries more strict and imposing a tax on diesel-guzzling trucks that want to enter the city. Since New Delhi began collecting those taxes last week, 30 percent fewer trucks have opted to pass through the city.

In probably the first case of its kind, the Supreme Court is hearing a case brought on behalf of three babies, the eldest 14 months old, seeking a ban on the use of firecrackers during the festival season to protect the children's fragile immune systems from the impact of pollution. Children are more vulnerable to developing lung ailments including asthma and bronchitis, as well as damage to their cognitive abilities and nervous systems.