The oil ministers of the OPEC cartel were gathering Tuesday to discuss this week whether to increase production of crude and help limit a rise in global energy prices. 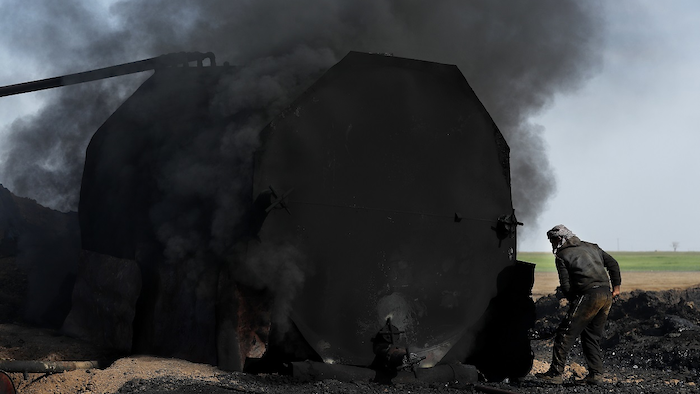 In this April 6, 2018 file photo, a former farmer works at a primitive refinery as he makes crude oil into diesel and other products, in Rmeilan, Hassakeh province, Syria. Image credit: AP Photo/Hussein Malla, file

The oil ministers of the OPEC cartel were gathering Tuesday to discuss this week whether to increase production of crude and help limit a rise in global energy prices.

The officials were arriving in Vienna ahead of the official meeting Friday, when they will also confer with Russia, a non-OPEC country that since late 2016 has cooperated with the cartel to limit production.

Analysts expect the group to discuss an increase in production of about 1 million barrels a day, ending the output cut agreed on in 2016.

The cut has since then pushed up the price of crude oil by about 50 percent. The U.S. benchmark in May hit its highest level in three and half years, at $72.35 a barrel.

Upon arriving, the energy minister of the United Arab Emirates, Suhail Al Mazrouei, said: "It's going to be hopefully a good meeting. We look forward to having this gathering with OPEC and non-OPEC."

The 14 countries in the Organization of the Petroleum Exporting Countries make more money with higher prices, but are mindful of the fact that more expensive crude can encourage a shift to renewable resources and hurt demand.

"Consumers as well as businesses will be hoping that this week's OPEC meeting succeeds in keeping a lid on prices, and in so doing calling a halt to a period which has seen a steady rise in fuel costs," said Michael Hewson, chief market analyst at CMC Markets U.K.

The rise in the cost of oil has been a key factor in driving up consumer price inflation in major economies like the U.S. and Europe in recent months.

Already U.S. President Donald Trump has called on OPEC to cut production, tweeting in April and again this month that "OPEC is at it again" by allowing oil prices to rise.

Within OPEC, an increase in output will not affect all countries equally. While Saudi Arabia, the cartel's biggest producer, is seen to be open to a rise in production, other countries cannot afford to do so. Those include Iran and Venezuela, whose industries are stymied either by international sanctions or domestic turmoil. Iran is a fierce regional rival to Saudi Arabia, meaning the OPEC deal could also influence the geopolitics in the Middle East.