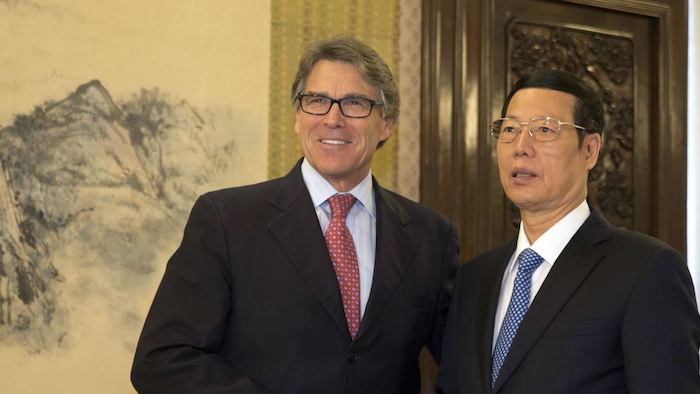 America and China have "extraordinary opportunities" to work together on clean energy, U.S. Energy Secretary Rick Perry said Thursday, amid global criticism of President Donald Trump's decision to pull the U.S. out of the Paris climate agreement.

In a meeting with Chinese Vice Premier Zhang Gaoli on the sidelines of a clean energy conference in Beijing, Perry cited liquefied natural gas, nuclear energy and carbon capture as areas where the two countries can cooperate.

"Those are three areas that I think we have extraordinary opportunities to be partners to work on clean energy issues," Perry said.

Trump's decision last week to withdraw from the climate agreement negotiated in 2015 sparked speculation that he is creating a leadership void that could be filled by China, the world's biggest emitter of greenhouse gases.

In Japan on Monday, Perry said he hoped China will step forward to be a "real leader" on climate issues, while rejecting criticism that the United States is backing down.

"I hope China will step in and attempt to take the mantle away. It would be a good challenge for them," Perry said. 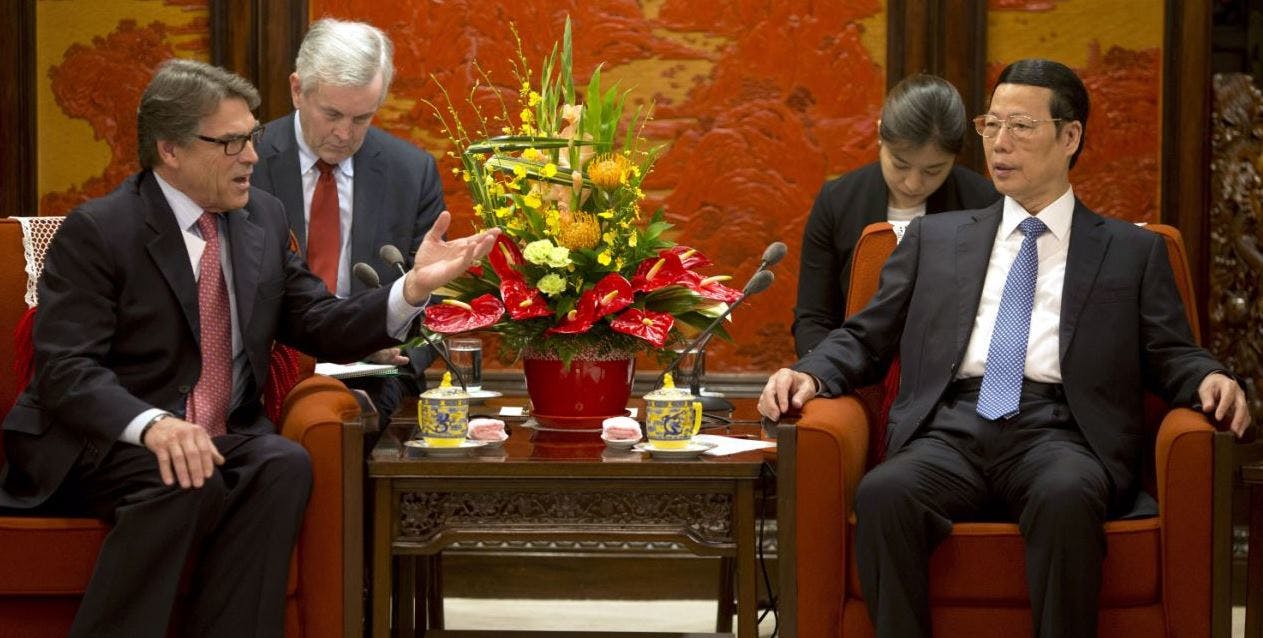 In their opening remarks before reporters were ushered out of Thursday's meeting, neither Perry nor Zhang mentioned Trump's decision. The 2015 agreement had largely been seen as a triumph of cooperation between the U.S. and China, the world's two biggest economies and energy consumers who are often at odds on issues such as regional security and human rights.

An official readout of the meeting later distributed to journalists cited Perry as also mentioning renewables — essentially wind and solar power — as another area of "mutual interest" to both countries.

China is a global leader in renewables, although its solar panels and wind turbines often sit idle and the energy they could produce goes to waste because of its outdated electrical grid and a preference among some local officials for coal, which still accounted for 62 percent of total energy consumption in 2016.

California Gov. Jerry Brown, who also attended the Beijing conference, told The Associated Press that Trump's move would ultimately prove only a temporary setback because China, European countries and individual U.S. states will fill the gap left by the federal government's move to abdicate leadership on the issue. China and California signed an agreement Tuesday to work together on reducing emissions.

Brown met with China's president, Xi Jinping, on Wednesday and told reporters later that they discussed ways to expand economic opportunities between China and California with an emphasis on clean energy.

In a notable contrast, Perry's meeting was with a leader of lower standing. Among the seven members of the Communist Party's all-powerful Politburo Standing Committee, Zhang ranks last.