Finland Plans To Phase Out Coal By 2030

The Finish government aims to make the Nordic country's energy production carbon-neutral by 2050. 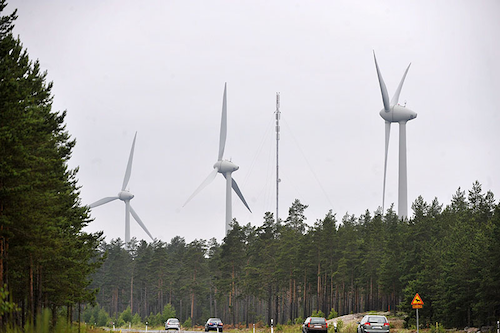 In a move to cut greenhouse gas emissions, Finland on Thursday announced plans to phase out coal within 14 years, cut oil imports by half and substantially increase the number of electric cars on the roads — partly to meet targets set by the European Union.

The government unveiled the plans in its "Energy and Climate Strategy for 2030 and Beyond," that aims to make the Nordic country's energy production carbon-neutral by 2050 and replace traditional power sources with biofuels and renewable energy.

"Utilizing the potential of Finnish renewable energy to produce electricity at an industrial level is one of the central questions in achieving long-term energy and climate goals," Economic Affairs Minister Oli Rehn said. "The national climate and energy strategy decided today in the Cabinet meets the tough targets from a Finnish standpoint."

With a third of its land area in the Arctic and long winters, the Nordic country uses a quarter of its electricity on heating homes, and is required by the EU to cut emissions from housing, transport and agriculture by 39 percent by 2030. This means increasing biofuels and renewable sources, such as leftover products from the forest industry and wind power.

Last year, renewable sources accounted for 40 percent of all energy consumption and are estimated to reach 47 percent by 2030 with the proposed measures — not far off the government target of 50 percent.

Transport and Communications Minister Anne Berner described the emission targets in the transport sector as "demanding," which partly will be met by increasing the number of electric cars on Finnish roads to 250,000 by 2030 — from the current estimated 1,000 — partly with subsidies. Also, biogas-driven cars will be increased to 50,000 from the current negligible number.

Imported oils, including petroleum, diesel, fuel oil and others will be halved during the 2020s compared to 2005 levels. Although the government wants to phase out coal, which produces 8 per cent of the country's electricity, it will continue in the near-term to promote burning peat, mainly because it's produced domestically.

The proposals, which need the approval of lawmakers, are due to be discussed in Parliament next month.