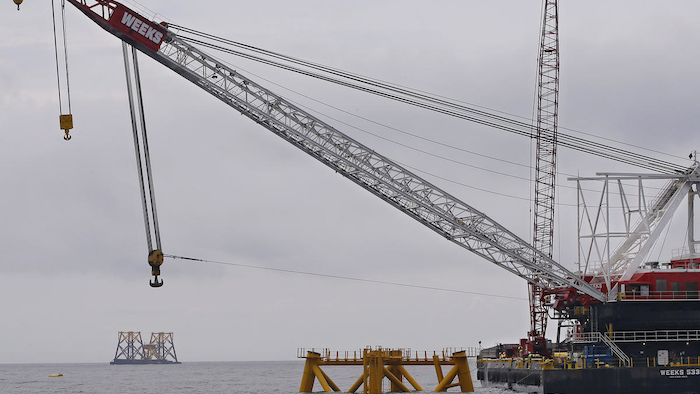 A construction crane works over a foundation installed for a wind turbine by Deepwater Wind off the coast of Block Island, R.I. Deepwater Wind anticipates opening the first U.S. offshore wind farm there in the fall of 2016. (AP Photo/Stephan Savoia, File)

The nation's first offshore wind farm is set to open off the coast of Rhode Island this fall, ushering in a new era in the U.S. for the industry.

Developers, federal regulators and industry experts say the opening will move the U.S. industry from a theory to reality, paving the way for the construction of many more wind farms that will eventually provide power for many Americans.

Deepwater Wind is building a five-turbine wind farm off Block Island, Rhode Island to power about 17,000 homes. The project costs about $300 million, according to the company.

CEO Jeffrey Grybowski said the Block Island wind farm enables larger projects because it proves that wind farms can be built along the nation's coast.

"I look at Block Island as sort of the key to unlocking the code of how to do offshore wind in the U.S.," he said.

This comes as other states have "suddenly woken up" to offshore wind's potential, Grybowski added.

Areas suitable for offshore wind farms have been identified off seven states and the Bureau of Ocean Energy Management has already awarded 11 commercial offshore wind energy leases for sites in the Atlantic Ocean.

Developers have requested commercial wind leases for areas off California and Hawaii. And a lease sale is planned for 81,000 acres off New York for commercial wind energy this year. 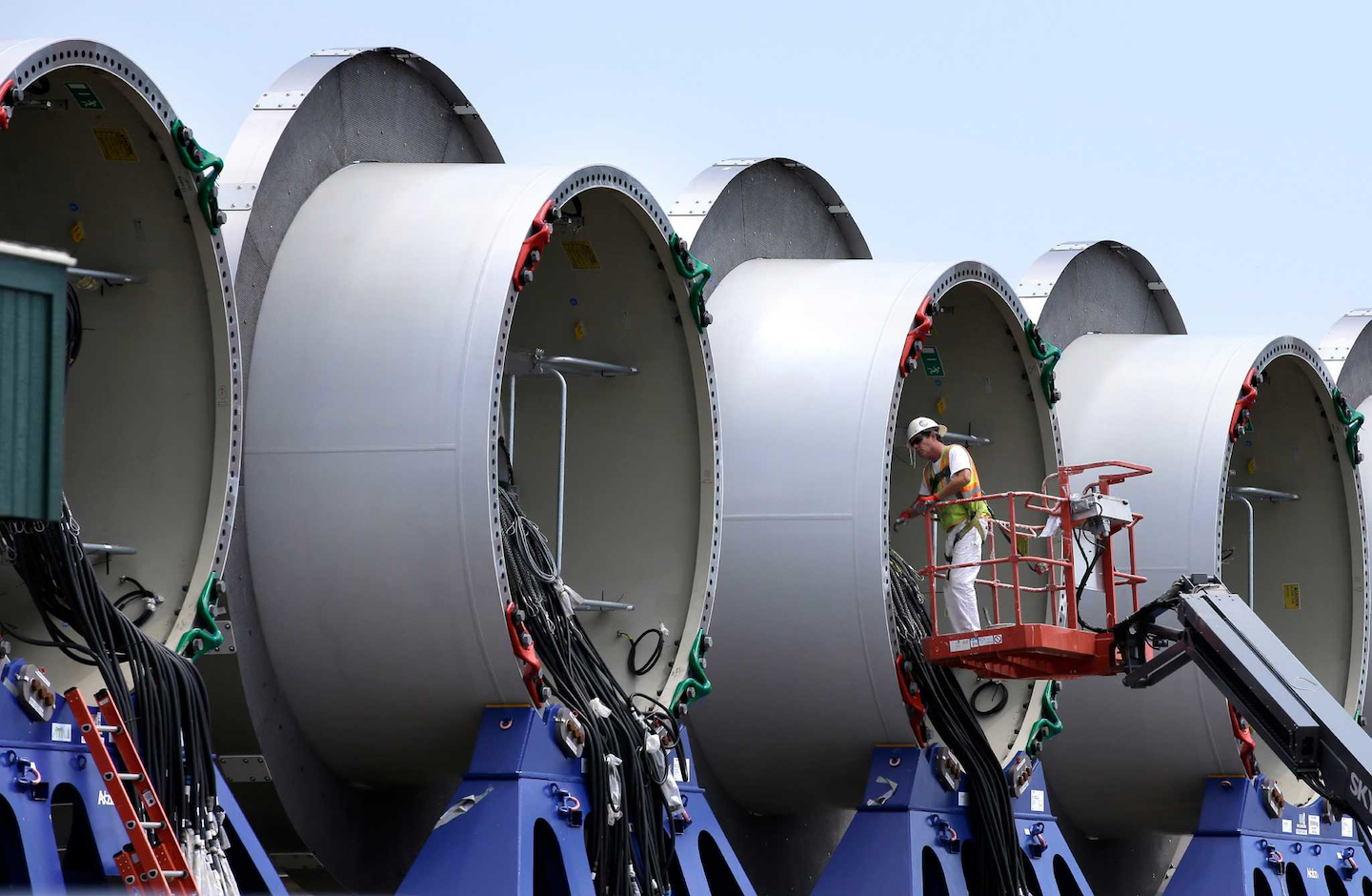 A worker stands on an elevated platform while working on partially assembled sections of wind turbine towers at a staging site for the nation's first off shore wind farm. (AP Photo/Steven Senne)

"There's a tremendous amount of activity and I think this will be viewed in history as the year that changed everything for the U.S. offshore wind industry," said Kit Kennedy, an energy and transportation expert at the Natural Resources Defense Council.

Offshore wind farms, which benefit from strong winds because of their location, are being proposed near population epicenters that lack the space to build on land.

Abigail Ross Hopper, director of the Bureau of Ocean Energy Management, said climate change is driving interest in offshore wind and she expects to see more wind farms being built in about three to five years.

"We are right on the edge of the cliff and we're about to leap off into the building of many wind farms," she said. "I really think that's true. State and federal policy, and the technology, are all coming together at the same time."

Indeed, several states are pushing ambitious clean energy goals, which include offshore wind. Among them is California, which has a target of generating 50 percent of its power from renewable sources by 2030. Vermont hopes to hit 55 percent by next year and Hawaii has called for 100 percent renewable power by 2045. 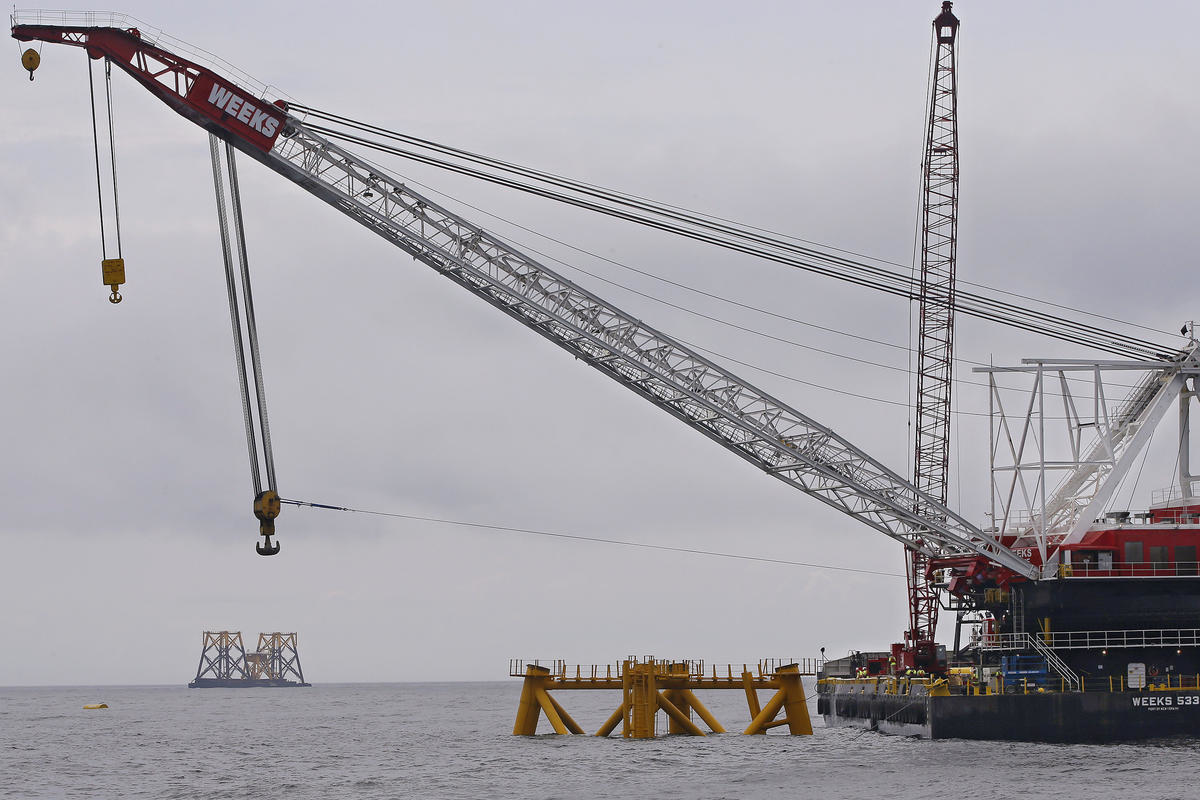 A construction crane works over a foundation installed for a wind turbine by Deepwater Wind off the coast of Block Island, R.I. Deepwater Wind anticipates opening the first U.S. offshore wind farm there in the fall of 2016. (AP Photo/Stephan Savoia, File)

Massachusetts decided to ramp up its reliance on renewable and alternative sources of energy under a bill signed into law just this week. The law, in part, requires utilities to solicit long-term contracts with offshore wind farm developers to bring at least 1,600 megawatts of wind energy, enough to power about 240,000 homes, to Massachusetts in the next decade. New York state recently committed to generating half its power from renewable sources by the year 2030. Many other states have set more modest goals.

But offshore wind is not without its growing pains.

Last month, a New York utility was set to approve a different Deepwater Wind project, this one a 15-turbine wind farm off eastern Long Island. But the vote was put on hold after officials said they wanted to wait until after the state's offshore wind master plan is released, sometime in the next several weeks.

Deepwater Wind is looking to sell power for approximately 50,000 homes to the Long Island Power Authority. It's considered the first phase in the company's ambitions to eventually build turbines producing 1,000 megawatts of power in the waters between eastern Long Island, Rhode Island and Massachusetts.

Catherine Bowes, a climate and energy expert at the National Wildlife Federation, said it has been hard for some people to think about offshore wind as a real, viable option 7/8— until now. She sees the Block Island wind farm coming online as a "springboard" for the industry.

"It's a shift from offshore wind being something that might happen in the future, to being a here and now clean energy opportunity," Bowes said.