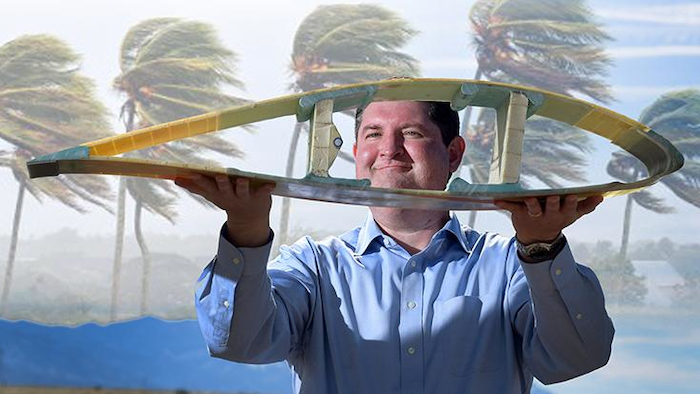 A novel design for enormous 200-meter-long blades could help bring offshore 50-megawatt (MW) wind turbines to the United States. If constructed, the blades would be longer than two football fields and span two and a half times longer than any wind blades in existence.

The University of Virginia School of Engineering and Applied Science is currently researching the viability for a large Segmented Ultralight Morphing Rotor (SUMR), which is funded by the Department of Energy’s (DOE) Advanced Research Projects Agency-Energy (ARPA-E) program.

Recently, the agency awarded a three-year $3.56 million federal grant to a team led by Professor Eric Loth, Chair of the Department of Mechanical and Aerospace Engineering. His team will use the grant to build a small-scale prototype of the SUMR wind turbine. 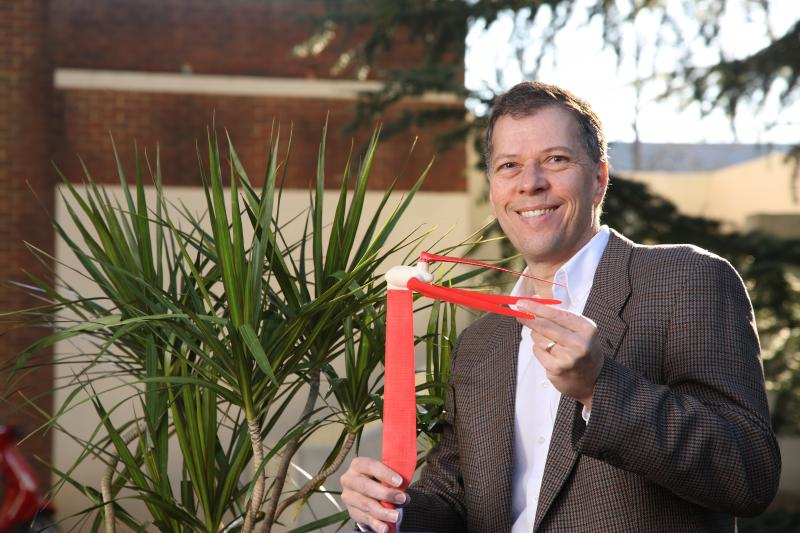 Eric Loth poses with a model of the SUMR wind turbine. (Image courtesy of the University of Virginia School of Engineering and Applied Science.)

“There are multiple aims of the project, the biggest one is driving down the cost of energy for offshore wind,” explains Todd Griffith, lead blade designer on the project and technical lead for Sandia’s Offshore Wind Energy Program. “The blade length we’re proposing is 200-meters. By going larger, we anticipate the cost of energy will come down.”

Currently, a 50-MW wind turbine doesn’t exist. The latest advancements only produce 8-MW and 10-MW with a standard three-blade design. If Loth and his team are successful, the DOE could attain its goal of providing 20 percent of the nation’s energy from wind by 2030, as outlined in the recently updated Wind Vision Report.

According to Loth, the U.S. will need to start taking advantage of its offshore wind resources to accomplish the DOE’s objective. However, offshore installations are expensive, meaning turbines must become larger to capture energy at an affordable price.

Unfortunately, at about 10-MW, weight and gravity becomes problematic, which forced the researchers to propose an outside-the-box design. Their solution, inspired by palm fronds, utilizes blades that face downwind and fold together in dangerous weather.

“Under storm loads – for example, hurricanes – the blades will fold up, similar to the way a palm tree will fold up under a hurricane,” says Griffith. “I refer to this as a natural defense mechanism.”

The concept incorporates a vertical plane geometry at below-rated speeds and then converts to a load-aligned downwind deflection between rated speeds and cutout speeds. The design relies on curvature and coning to balance gravity, aerodynamic, and centrifugal forces. 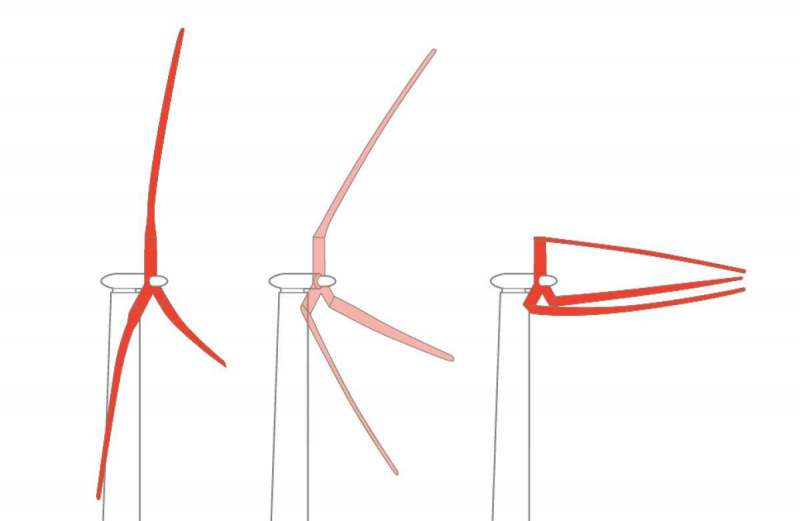 Conventional wind turbine blades are usually located upwind of the tower, which causes the wind to push the blades back toward the tower in operation. Therefore, the downwind architecture of the exascale blades will prevent them from accidentally striking the tower.

Loth believes that the ability to fold the blades together will eliminate cantilever loads ten-fold, and will allow his team to use much lighter blades built in segments, which would reduce the cost of the turbine substantially.

Back in 2009, Sandia started working on a design for a 13-MW system that uses 100-meter blades on which the initial segmented rotor designs are based. The project helped demonstrate that load alignment can dramatically reduce peak stresses and fatigue on the rotor blades. 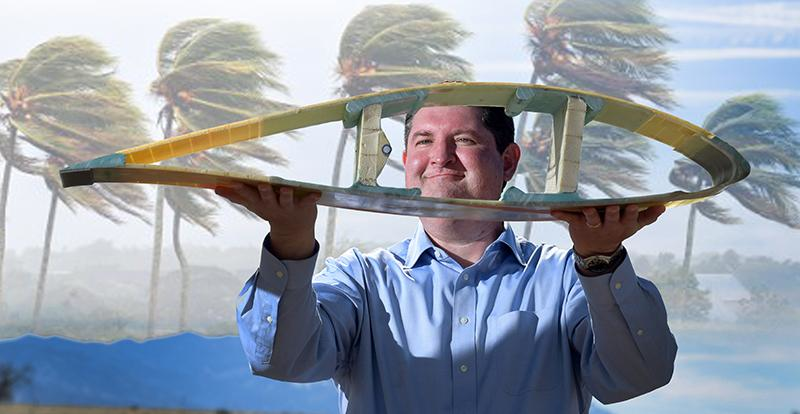 In contrast, conventional upwind blades need to be stiff to avoid fatigue and eradicate the risk of tower strikes in strong winds. Thus, they are expensive to manufacture, deploy, and maintain beyond 10-MW to 15-MW. For the 50-MW turbine, Griffith proposes placing a trunnion hinge at the base of the blades, which can be controlled to fold up when winds exceed a high speed value, such as 100 mph.

Extreme scale turbine blades cannot rely on stiff blades due to the increased mass and gravity loads, which are also directly related to cost. The new blade design could be manufactured in simpler, more cost-effective segments, thus avoiding the massive equipment needed to transport and assemble the blades constructed as a whole entity.

“We did a couple of material studies in our 100-meter blade project. We started with fiberglass, which is typical, because they’re much less expensive than carbon fiber,” explains Griffith. “However, carbon fiber comes with a much higher cost, but the stiffness is much higher and its weight is much lower.”

The researchers hope to use a fiberglass material for the bulk of the design, while adding the more expensive carbon fiber selectively where needed. Other alternative materials will be investigated over the course of their research.

Many steps remain before designers and engineers can scale up to a 50-MW turbine. For the first year of the project, the researchers will work on designing a 13-MW version of the SUMR turbine, with 100-meter-long blades.

This image shows the sizes of various wind turbines, including the project sub-scale demonstrator (SUMR-D) to be tested in 2018 and the two extreme-scale designs (SUMR13 and SUMR50). (Image courtesy of the University of Virginia.)

Then, during the second and third year of the project, the researchers will design and construct a subscale version of the 13-MW turbine, with 20-meter-long blades. In addition, they will also perform a field testing demonstrator campaign to showcase the feasibility of the project. Afterward, Loth and his team can begin to move forward with the larger 50-MW turbine design.

Throughout the first three years of the project, Sandia will also be responsible for developing an analysis tool to analyze aeroelastic stability, otherwise known as flutter. Griffith wants to avoid the potential galloping effect of blades under wind loading, similar to what poorly constructed bridges sometimes experience.

“One of the big focuses of ARPA-E is technology transfer and outreach, and we do have a plan from now until 2036 to advance this technology all the way to full-scale,” explains Griffith. “If we meet all our milestones within the next 20 years, we hope to work with the industry to fully fund the project.”

Griffith explains that the role of national laboratories is to try to get out in front of issues that the industry might face.

“Typically, we look for pathways to make technology work and to drive down costs, and we help the industry to adopt that technology,” he says. “We’re hoping to do that through this project as well – through the blade design work we’re doing; through the controls work and development; and also through the technology demonstration we plan.”

The next three years will determine the scope and feasibility of the project. If achievable, the extreme-scale wind turbines could revolutionize clean energy production in the United States and around the world.

This article originally appeared in the May/June 2016 print issue of Product Design & Development.