Since 2008, oil train traffic across America has grown by a whopping 5,000 percent. 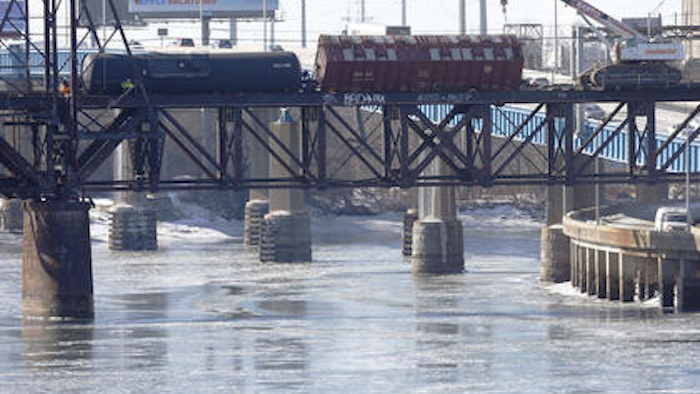 Since 2008, oil train traffic across America has grown by a whopping 5,000 percent. Now a recent study is shining a light on a potential threat to the increased traffic: the country’s energy infrastructure.

The report, titled “Deadly Crossing: Neglected Bridges & Exploding Oil Trains,” details a survey of 250 train bridges across the country, and the results are less than reassuring. According to the researchers, about half of the bridges inspected showed areas of “significant concern” including crumbling concrete, broken beams, loose or missing bolts and other eroding parts.

The volunteer researchers were part of a coalition of environmentalists focused on conserving America’s waterways, including Waterkeeper Alliance, Riverkeeper and Forest Ethics.

The authors pointed out in the statement that they are not professional bridge engineers, but said their findings should lead to increased scrutiny of bridge safety and regulation.

“While Waterkeeper inspectors may not be bridge engineers, they are advocates with legal, public policy, and scientific experience monitoring waterways for water pollution and threats to human health and the environment,” the groups wrote. “They found that failing, undermined, and missing structural materials were most common where foundations sit in waterways, especially below the high water mark.”

The country’s 100,000 bridges — some built more than 100 years ago — are overseen by the Federal Railroad Administration. Critics say the agency rarely inspects rail bridges and often says it is the responsibility of the railroads, who keep their inspection records private.

Ed Greenberg, spokesperson from the railroads’ main industry group, the Association of American Railroads, cautioned that the study’s authors are not certified inspectors and pointed out that there has yet to be a major oil train accident caused by a bridge failure.

"Railroad bridges are among the safest segments of the nation’s infrastructure. Some bridges are painted, others are not. Some are more weathered than others. But outward appearance does not indicate a bridge’s safety," he said in an emailed statement. "Safety is the number one priority of all freight railroads moving America’s economy."

Greenberg stressed that overall rail safety in the U.S. has improved in the last few decades. Yet, dozens of derailments in recent years — including the fiery oil train disaster in the small Canadian town of Lac-Megantic that killed 47 people in 2013 — have kept the issue in the limelight.

Just last weekend, two separate derailments occurred in Wisconsin, including one that spilled ethanol in the Mississippi River. In the other incident, more than a dozen oil train cars jumped the tracks, causing one car to spill hundreds of gallons of crude. Canadian Pacific Railroad has since reported that that accident was caused by a broken rail on the tracks that wasn’t visible to the naked eye.

Meanwhile, the oil traffic on the rails isn’t expected to slow down anytime soon, especially since the Obama administration rejected the Keystone XL pipeline project, which would have diverted some of the oil away from trains.

Along with the report, the environmental groups have called on the industry and regulatory bodies to increase inspections of railroad bridges and not transport crude on crumbling bridges.